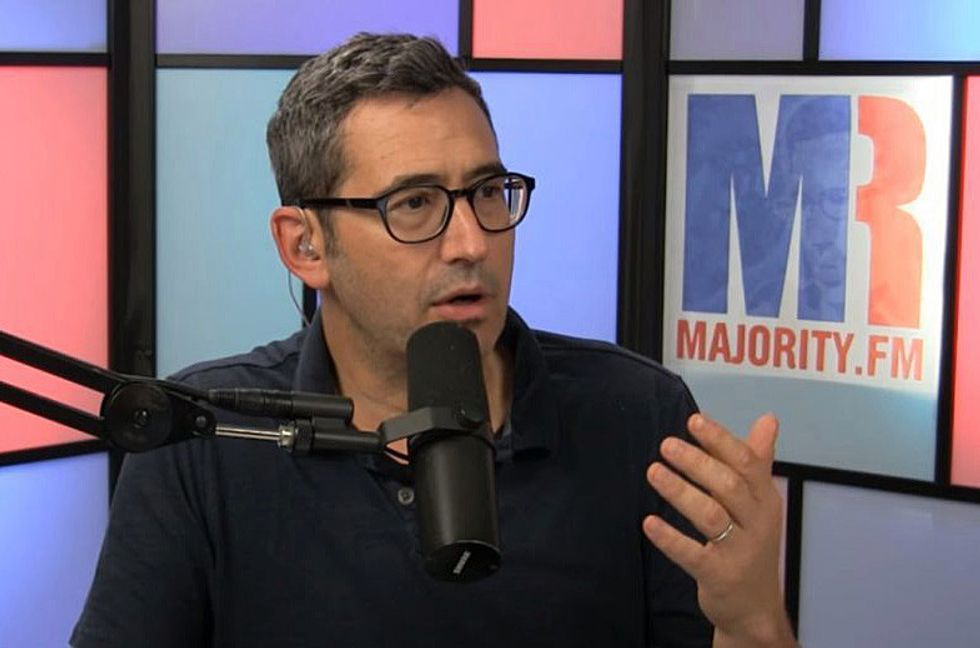 MSNBC, in an amazing display of a media organization knuckling under to rightwing fuckery, has announced it's cutting ties with Sam Seder over a 2009 tweet that mocked defenders of Roman Polanski. Yes, you read that right -- Seder was fired, in essence, for saying rape is bad, but doing it with sarcasm that could be misread by idiots. Here's the context: At the time, quite a few Hollywood types were signing a petition calling for Switzerland to release Polanski, who'd been arrested on child rape charges dating from the '70s. The man was a Great Artist, said the petition, and so why let a bit of child rape from long ago harsh his Artistic Vision. Seder, disgusted by the very idea, sent out this tweet, which has since been deleted:

Anyone with half a brain should be able to recognize that's a slam against Polanski supporters, making fun of the very idea that mastery of film technique could possibly excuse doing sex with a 13-year-old girl -- and one who'd been drugged up, at that. Why, it's as insane a claim as saying an accused child molester belongs in the US Senate because he's a reliable vote for tax cuts.

In the last week or so, rightwing ratfuckers led by #pizzagate conspiracy promoter Mike Cernovich have orchestrated an email campaign aimed at advertisers on Seder's Majority Report podcast, disingenuously wailing about how Seder supposedly "condones" child rape. Seder shared a sample in a YouTube video responding to the fake outcry:

Strip out the context, lie a little, and suddenly a sarcastic condemnation of a child rapist can be reframed as "horrific child rape comments." If you're an idiot or a liar, and Mike Cernovich is both. Fired White House spokesasshole Sebastian Gorka got in on the pretended outrage act, too:

You do have to wonder what the hell MSNBC was thinking when it fired Sam Seder yesterday, at least until you google "MSNBC fires Sam Seder" and find headlines like these:

Rather than showing a bit of integrity, the gutless cowards at MSNBC gave the boot to a very effective, sharp-witted commentator to appease a horde of venal, lying Donald Trump fans -- and to avoid headlines like "MSNBC Stands by Commentator After Rape Joke."

How stupid is MSNBC's decision? So stupid that even rightwing tweet-trawler Twitchy said it was crap, approvingly quoting a supporter of Seder in a headline:

Deleted Emails: I Will Shoot You For Sarah Huckabee Sanders. PS THIS IS NOT A THREAT

We said a swear about the White House press secretary, and boy are our arms tired.

When Wonkette agrees with Twitchy -- which recently helped send the Internet Flying Monkey Brigade after us because we said a swear about Sarah Huckabee Sanders -- you might almost get a bit of hope for public discourse, just maybe.

Mike Cernovich, we should add, is not exactly a guy who worries too much about rape, except when he can stir up a campaign of fake outrage aimed at a liberal. He has his own unique perspective on the topic:

Chris Hayes, who frequently had Seder as a guest, was disgusted by his network's decision, and urged people to subscribe to Seder's podcast. Hayes asked for a little less feeding frenzy in reaction to attempts to get people fired:

MSNBC should know better -- and should have learned something from the disgusting treatment of Shirley Sherrod in 2010. You also have to wonder what the fuck is up at MSNBC when they covered for years for Matt Lauer, but cut Seder loose thanks to a rightwing ratfucking scheme. As Mother Jones writer Kevin Drum asks, "What the hell is in the water these days at 30 Rock?"

Go sign the petition to MSNBC demanding they rehire Sam Seder. The last person any media organization should be listening to is Mike Cernovich, a genuine joking-but-only-serious rape apologist.

Yr Wonkette is supported by reader contributions. Click here to keep intelligent snark coming your way. We're not being sarcastic when we say we love you.