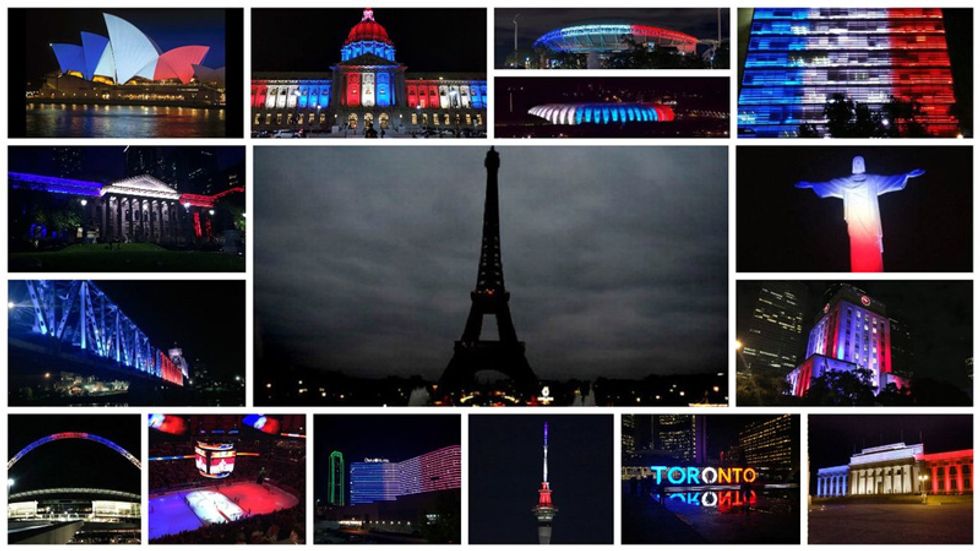 Keep the lights on

Earlier today, we brought you some of the inevitable political awfulness that hit the interwebs after the Paris attacks. We're Yr Wonkette; political awfulness is our stock in trade. But we also wanted to call your attention to a couple of fine reads that remind us that, in the face of horror and cruelty, our damned human race has the capacity for resilience, courage, and grace. So if the events of the last day have turned the dimmer switch on your view of humanity to the lowest possible setting, we'd like to point you to a couple of fine reads that remind us that the monsters (and the mere bastards) stand out precisely because they are deviations from the norm of humanity. So let's remind ourselves that we have the capacity to be better, when we need to.

First off, give a read to occasional Wonker Jesse Berney's fine Rolling Stone piece arguing that instead of closing our doors to refugees from chaos in the Middle east, we need to be welcoming them in:

Already in the midst of a refugee crisis, European nations may give in to anger and fear and shut their doors for good. Congress will urge President Obama to do the same and cancel modest plans to resettle some refugees from Syria.

But we should do the opposite. When we see attacks like the horror in Paris, we should open our borders to a flood of refugees, not close them. We should shower those families with generosity. We should make sure they have jobs that fit their skills. We should educate their children. We should provide them health care and whatever social services they need.

The West should do everything in its power to make those fleeing ISIS and extremism everywhere feel welcome and wanted.

And this isn't only because offering refuge to the suffering is a good thing to do, which it is. Jesse argues that it's probably one of the best things we can do in our own interest to fight terrorism. God knows that bombs, drones, and Guantanamo haven't slowed down terrorist recruitment; atrocities breed more recruits.

To win the War on Terror, to actually defeat the terrorists, we have to dry up their recruiting once and for all. We have a chance of doing that by showing Muslims everywhere – Muslims targeted by terrorists in their homeland -- that we stand with them as fellow humans, and that when they face violence and oppression in their homelands, we should welcome them in ours.

Yes, there's also police and intelligence work to do to reduce the risk. Yes, we'll undoubtedly ramp up our military actions against ISIS. But there's something to be said for welcoming refugees and letting them know that the United States really is a home for people from everywhere -- and in any case, let's remember that the 9/11 terrorists arrived with stamped visas, not through refugee agencies. Go read the whole thing -- it's outstanding. And when you're finished, we've got some more reading to recommend.

That would be Stephen Marche's brief but beautiful Esquire essay on the resilience of Parisians, and their refusal to let barbarism tarnish their humanity:

Let us remember what the people of Paris did in this moment of darkness. Within an hour of the first explosion, as far as I can tell at this point the #PorteOuverte movement had already begun. A phone number. A hashtag. They all went up seemingly in a flash of collective will. And what everyone was saying is that the doors are open. Anyone stranded in Paris, anyone who needed a place to say, could have one. Thousands upon thousands of people, in the whirlwind of tremendous fear, made that statement and that sacrifice, without even thinking about it.

And then there were the taxi drivers. The city was on lockdown. People were stranded. The taxi drivers of Paris, instead of removing themselves or, as many might, using the emergency to make money, offered free rides to anyone who needed them. There are times when there is such a thing as a common humanity, and it matters more than anything.

One more factoid: Parisians have been lining up by the hundreds, waiting for hours to give blood. So many that authorities are asking people to space out donations, so that fresh blood is available as it's needed.

Light a candle for Paris. Sing La Marseillaise, or hum along at least. Stay human. We'll see you at the debate tonight.

And one more video: Saturday, an unidentified musician set up a piano near the entrance of La Bataclan, the site of the worst of the violence, and played John Lennon's "Imagine":