Reagan Boys Disagree On Dad's Dementia, Much Else 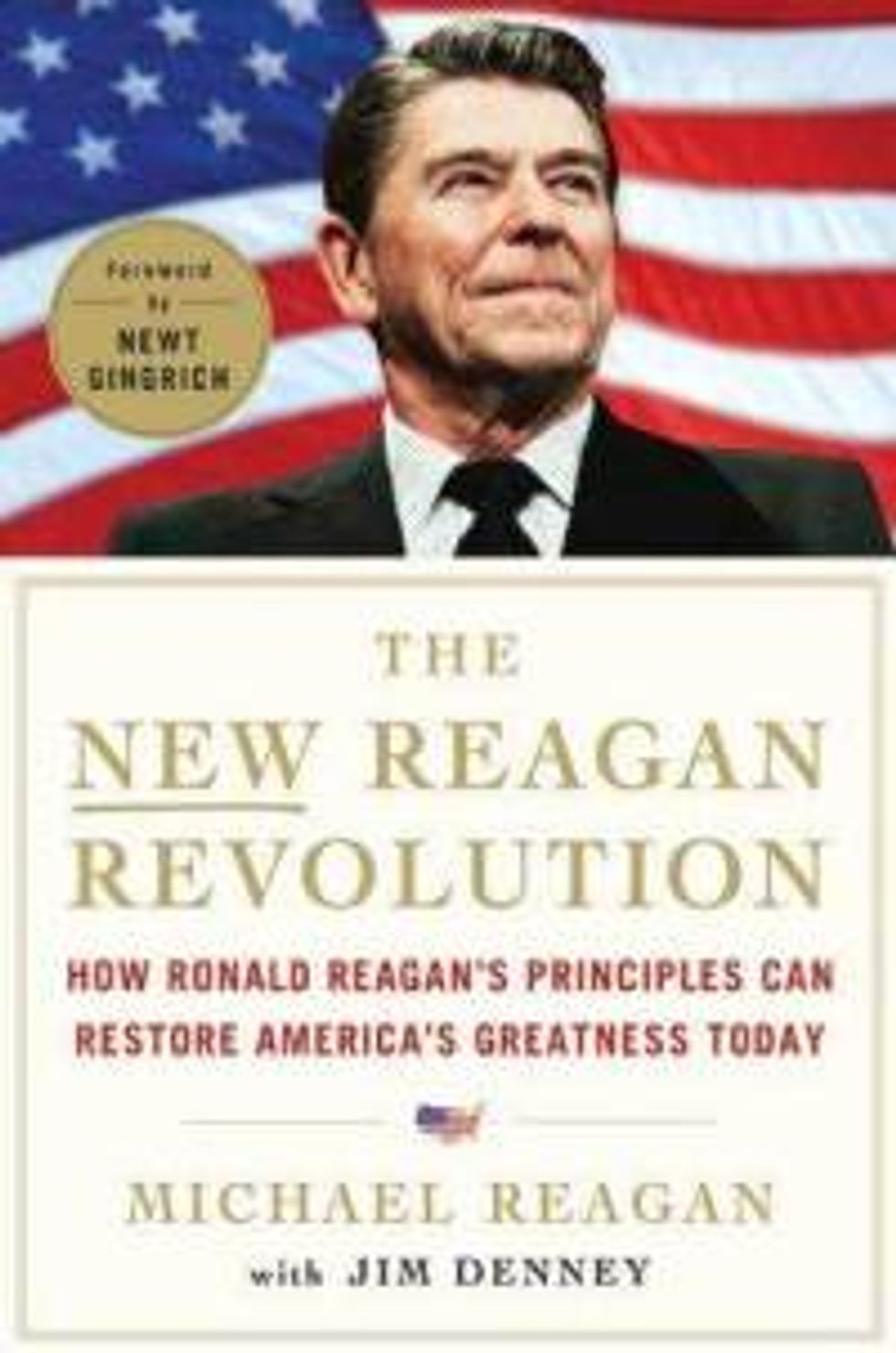 Ancient lizard god Ronald Reagan achieved many things during his 93 years on Planet Earth, one of which was the actual creation of Planet Earth (modern conservative scholars will confirm this, so don’t argue). It seems our greatest president’s 100th birthday will occur this February 6 (mark your calendar with eagle tears, plan a seance, etc.), so both his actual son and his unwanted adopted son are marking the occasion by releasing dad-themed books: The New Reagan Revolution: How Ronald Reagan's Principles Can Restore America's Greatness is from the adoptee, Michael, and My Father at 100is by balletic son Ron. Apparently these two really hate each other, mainly because they can’t agree on just when Pop started to go a bit funny in the head.

Ron Reagan -- a liberal, a ballet dancer, a Buddhist and an atheist (soon to be an imam, probably) -- argues that his father was in some ways very different from the modern wingnut movement that claims him as their totem. For instance: Reagan Sr. negotiated with Gorbachev, instead of ... well, what was the alternative, really? Nuking him directly? Reagan Jr. says that was never an option, as his father had a genuine horror of nuclear weapons, which made him an at least halfway-sane human being.

Speaking of sanity, Ron also claims that his father was showing symptoms of Alzheimer’s as early as 1984:

At 73, Ronald Reagan would be the oldest president ever reelected. Some voters were beginning to imagine grandpa -- who can never find his reading glasses -- in charge of a bristling nuclear arsenal, and it was making them nervous. Worse, my father now seemed to be giving them legitimate cause for concern. My heart sank as he floundered his way through his responses, fumbling with his notes, uncharacteristically lost for words. He looked tired and bewildered.

A bit later, Ron blames the Iran-Contra affair on “nefarious characters associated with his National Security Council” who took advantage of the President’s senility:

Dad, ever guileless and straightforward, never quite grasped, for instance, that the seemingly respectful, decorated soldier fairly beaming with flattery, who had, on rare occasions, been brought to meet him in the Oval Office, had in fact conspired with his national security adviser, among others, to break the law.

In the midst of the scandal, Ron goes to the White House to have dinner with his parents:

I expected, upon arriving at the White House, to find a chief executive fully immersed in the details of the scandal, busily formulating a response, and grimly determined to see a few heads rolling. Instead, I found my father lost in a fog of depression and denial.

These innocuous observations have outraged talk-radio wingnut Michael Reagan (adopted son of Prez Ronald and pre-Nancy wife Jane Wyman), who took to Twitter to call his half-brother “an embarrassment to his father when he was alive.”

Frankly, we don’t see what Michael’s so upset about. If Ronald Reagan smashed Red Mexican imperialism in Central America and single-handedly toppled the Soviet Union all while he had Alzheimer’s, doesn’t that just make him extra-great? We doubt that certain, ahem, Kenyans we could mention would be capable of such feats while stricken with grave brain troubles.

So how does Michael Reagan wish us to remember his father? As far as Iran-Contra, he says:

... between you and me, I’m not sure Dad truly felt that his administration had done anything wrong. The Democrat-controlled Congress had repeatedly blocked his efforts to support the anti-Communist Contras in Nicaragua. My father saw it as a matter of national security to keep the Soviet-sponsored Sandinistas from taking over Nicaragua -- yet the Democrats seemed to be siding with America’s enemies.

Yeah, the public can be a major bitch sometimes. But if you want to get that approval rating sexytime ....

However this Reagan-contra-Reagan bloodletting ends, and whatever the case may be with the Gipper’s Alzheimer’s, your reviewer sincerely hopes you will set aside February 6 for patriotic celebration. Selling a gun to a mullah, telling the Ruskies to fuck off, costumed midnight screening of Red Dawn, any American ritual will do.