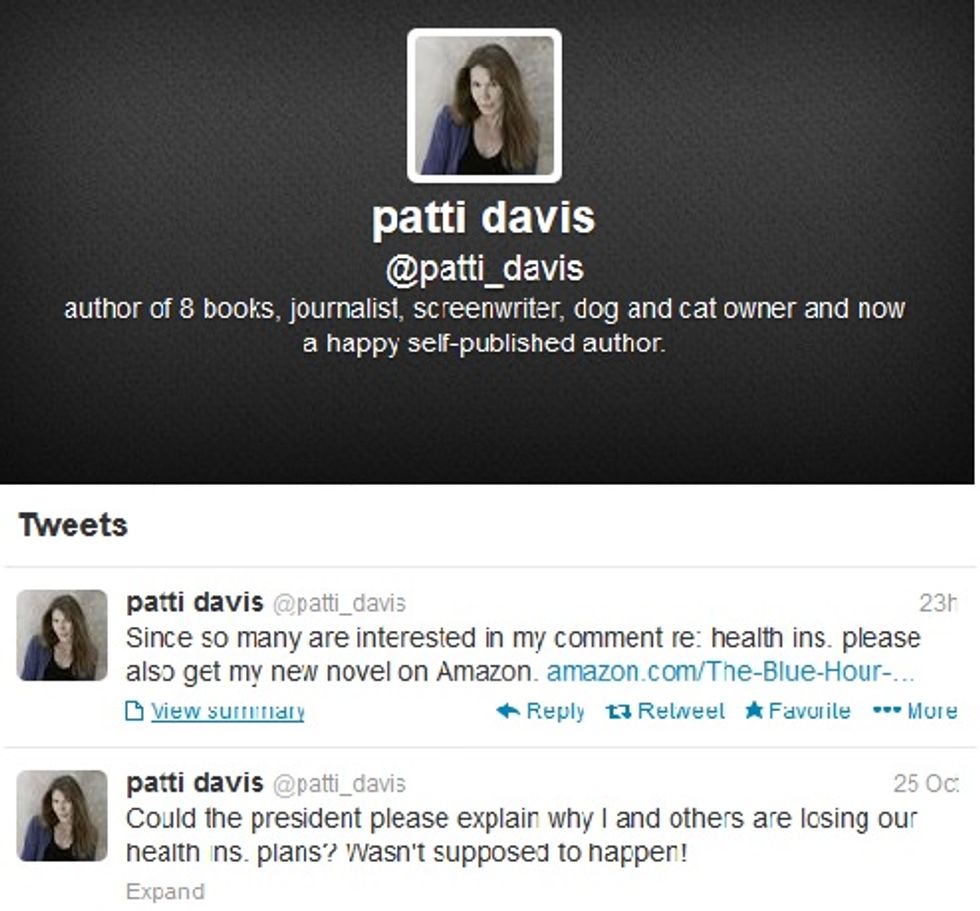 Hey, Barack Obama! You promised that if people liked their insurance they could keep it forever! (OK, so maybe you didn't exactly say that, really. But details are boring.) Based on nothing more than this tweet, we now know that Patti Davis has lost her health insurance, and it's all Obama's fault. Shut up, you don't need to know what kind of plan she had or what happened, exactly. The main thing to know is, Davis is a liberal who voted for Obama, and now she hates the nasty socialist who wouldn't force a private company to give her exactly what she wants.

What kind of insurance did Davis have? Damned if we know, and damned if we can find a single interview with her that goes into that teensy detail. Since she's an "actress and author," we're going to guess that she's probably like our angry college graduate from a couple weeks back, and had a bare-bones, high-deductible plan that didn't meet the minimum coverage requirements for the ACA; since she lives in California, she should have no problem finding an affordable replacement that actually provides better coverage. So she may actually have to go from really crappy insurance to insurance that actually covers something. The horror. The horror. This is exactly the socialist nightmare that her father warned about.

Incidentally, after her tweet got coverage all over the Wingnuttosphere, the only thing she's tweeted subsequently is that note about how she has a self-published novel about ghosts available, for you to buy, if you're one of the many many people who are now checking out her twitter feed. We're going to have to remember that strategy for our next big garage sale.

Also, why did Barack Obama go and promise America that nothing would ever change, and now some of our favorite teevee programs got cancelled for no reason at all, huh? Bring back Breaking Bad, Obama!