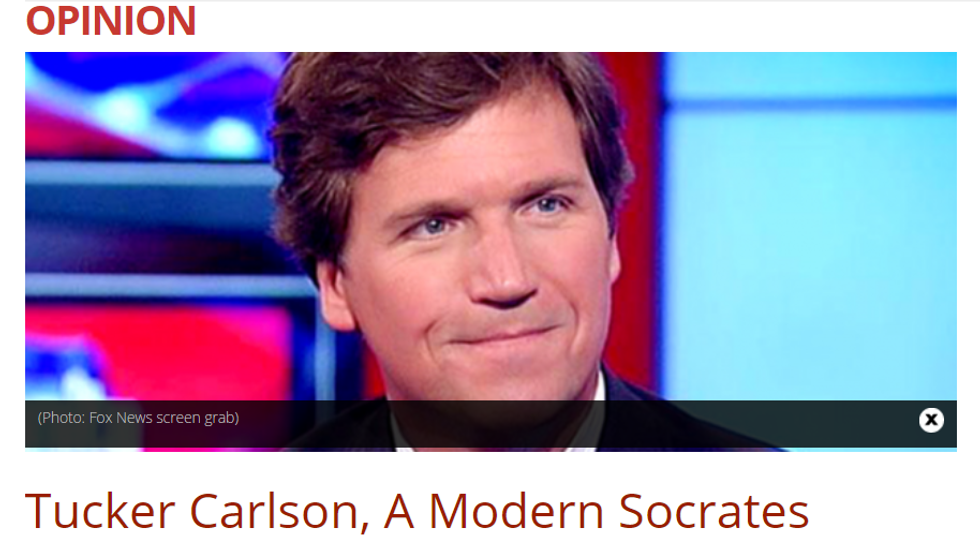 This is the thing we found:

If you are blissfully unaware, Tucker Carlson is not only the second biggest idiot to appear on Fox News each and every night, he is also the founder of The Daily Caller. He's not the editor anymore, because he is doing Important Work being a shitty TV host.

The writer of the piece above is named "Chris Kalbach," but we don't know if he's a real person and we're far too lazy to look it up. He is prolific, having written four whole pieces for the Daily Caller since January. Now look, we're not saying Kalbach did not write this paean to Tucker Carlson's "Socratic" interviewing skills, but we are also not saying Tucker Carlson didn't awaken from a night terror with a terror boner one late evening in March, and immediately take his panties off and ghost-write a story about how awesome he is, under the name of "Chris Kalbach."

Tucker Carlson learned the lesson of history, and he’s following in the footsteps of Socrates.

It's impressive how "Chris Kalbach" typed this with just his left hand, ALLEGEDLY.

By not taking a position, Carlson makes sure that the focus isn’t on his beliefs, but on the beliefs in question. He can hold everyone accountable for their words.

TUCKER CARLSON does not take a position? Tucker is literally one rung on the ladder below Sean Hannity when it comes to taking stupid indefensible positions and then shouting at his guests and declaring victory when the segment is over.

Tucker is one of the worst TV hosts ever to appear on a channel we do not watch. His most memorable interview in the past 12 months was when that badass chick from Teen Vogue kicked his ass. One of his favorite stories is about the time he got Gay Panic like a pussy, and proceeded to beat up a gay dude in the bathroom.

Was "Chris Kalbach" sniffing poppers when he wrote that last part? Or was he just sniffing glue?

"Chris Kalbach" whacked his willy (ALLEGEDLY) to the idea of Tucker Carlson as Socrates all the way to this last line:

Carlson followed the philosophers. He followed Socrates. And while he is no Socrates, he is a fantastic model for young students looking to shine in journalism.

UH OH, did a creeping feeling of inferiority just interfere with somebody's jerk-off session? Did it force him (whomever "he" is) to type the words, "while he is no Socrates"? Tough break, dude, it happens to all guys, no really it does.

Editrix Rebecca, who is DEFINITELY NOT GHOSTWRITING THIS POST RIGHT NOW, was just wondering why none of the Wonkette employees have ever written such a glowing tribute to her. OUR BAD, we are probably all fired. Tough break, us!

We've searched the annals of Wonkette, and the most self-glorifying things ANY OF US WONKETTES have posted (that we remember, as we are often drunk) are the following:

Wait, that last one may not quite fit our theme.

Well anyway, because we aspire to be like "Chris Kalbach" who aspires to be like "Tucker Carlson," we will rectify the lack of "Rebecca As Prophet" stories on Wonkette with the following prayer:

While she is no Tucker Carlson, she makes us laugh and is fun to work for and anyway she signs our paychecks real nice-like so HEY YOU FUCKERS SHOULD GIVE US A LOT OF MONEY SO SHE CAN HAVE EVEN MORE FUN SIGNING OUR PAYCHECKS.

Goddammit that shit didn't even rhyme.