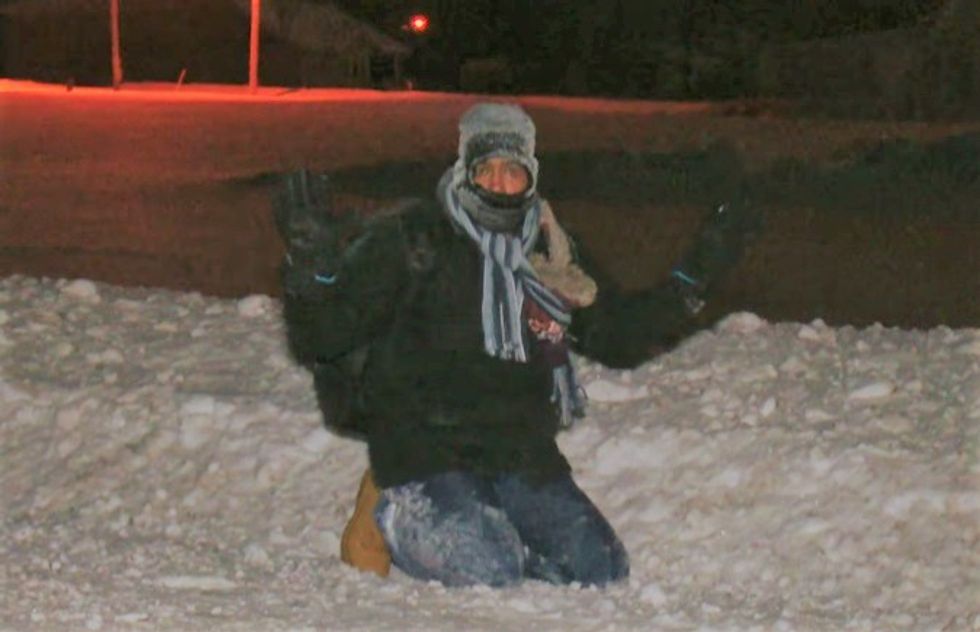 We know, Wonkers. You never watch the videos because they're often too awful. Please watch this story by CBC reporter Nick Purdon about a Somali refugee he found in the snow last weekend near Emerson, Manitoba. It matters. You'll also see an interview with Ahmed from Ghana, who came to Canada after losing an asylum claim in the U.S., one of hundreds of refugees who have made the dangerous winter crossing from the U.S. after we refused to grant them refuge. And you'll see Purdon's rescue of Mohamed, the Somali man who had been walking in the snow for 21 hours and wasn't entirely sure he'd reached Canada -- he was afraid to go with an RCMP officer to a hospital, fearing he'd be sent to America and then deported. It matters because -- and you really need to sit yourselves down and think about this for a moment -- America is now a country that people run away from.

How the hell did my country become a place people run away from in hopes they might find freedom in Canada? I'm not so naive as to buy into Ronald Reagan's dumb myth about America as a shining city on a hill, a perversion of John Winthrop's Puritan warning that we must not screw up: "We shall be as a city upon a hill, the eyes of all people are upon us." Winthrop knew better than to assume shininess. America is a nation conceived in slavery and genocide, after all. We're the nation that brought the world the My Lai massacre, and made Lt. William Calley a folk hero. In the 1930s we turned away Jews fleeing Nazi Germany. We sent the M.S. St. Louis back to Europe, and half her passengers died in the Holocaust.

I know all these things. But I still wept when I realized we are now a country a lot of people have decided they must flee.

As Purdon notes, "it's a quirk of law that if you're coming from the United States, the only way you can claim refugee status in Canada is if you sneak in." ABC News explains further:

Those fleeing the U.S. avoid border posts because of an agreement -- called Safe Third Country -- that requires migrants to request refugee protection in the first safe country they arrive in. That means migrants arriving at a Canadian border post are rejected and told to apply in the U.S.

And if the U.S. says no, the next step is deportation. So people are running away to Canada. Under Donald Trump's anti-immigrant policies, we don't do refugees anymore, not for now, because we're afraid. We're terrified of people fleeing war, or of people like Ahmed, fleeing countries where good Christian people want them dead because they're gay. We can't take everyone. We have to look out for ourselves. America First.

Ursula LeGuin wrote a much-anthologized short story, "The Ones Who Walk Away From Omelas," about a near-paradise of a city-state where the population is happy, well-educated, creative, living in almost unimaginable bliss, peace, and beauty. Because this is a fable, there is one small price to be paid for the happiness of all the citizens of Omelas: In a basement somewhere, a feeble-minded child sits naked and terrified, covered in sores and sitting in its own excrement. The child is utterly without hope, and upon its suffering the happiness of Omelas rests:

They all know it is there, all the people of Omelas. Some of them have come to see it, others are content merely to know it is there. They all know that it has to be there. Some of them understand why, and some do not, but they all understand that their happiness, the beauty of their city, the tenderness of their friendships, the health of their children, the wisdom of their scholars, the skill of their makers, even the abundance of their harvest and the kindly weathers of their skies, depend wholly on this child's abominable misery.

To relieve the suffering of the child would break the deal. If someone ever removed the child from the cellar or even spoke a kind word to it, the happiness, peace, and prosperity of the thousands would vanish. "Those are the terms," LeGuin says. When young people learn about this ugly reality, they are appalled at the injustice of it all, filled with rage and sorrow, but eventually, they come to accept "the terrible justice of reality." Because they know the truth, their happiness is tempered with wisdom:

And every now and then, someone who sees the child walks away from Omelas. The bargain isn't acceptable to them. They don't know where they're going, but they cannot stay.

I always liked the class discussions we'd have when I used "The Ones Who Walk Away From Omelas" in college writing classes, although it was frustrating, sometimes, when students would simply slap a label on the story and pronounce it a condemnation of "communism," which seems rather to miss the point. Sometimes more adventurous students would liken the suffering child in the basement to child laborers who make our consumer goods, which is probably closer to LeGuin's point but still probably too narrow an attempt at "X=Y" symbolism. But as a fable about humans' responsibility for each other, and our ability to rationalize the pain of those who are Not Us, it's first-rate.

America is not Omelas -- we're no paradise to start with. But we are now a nation people have to run away from to find freedom and solace. That's almost enough to make me want to walk away. But since we're not stuck in a fable, it's better to stay and fight to make this a country worth staying in.

Yr Wonkette is now ad-free! If you want to help us keep it that way, please throw a few Ameros our way. (They're good throughout the NAFTA zone!)