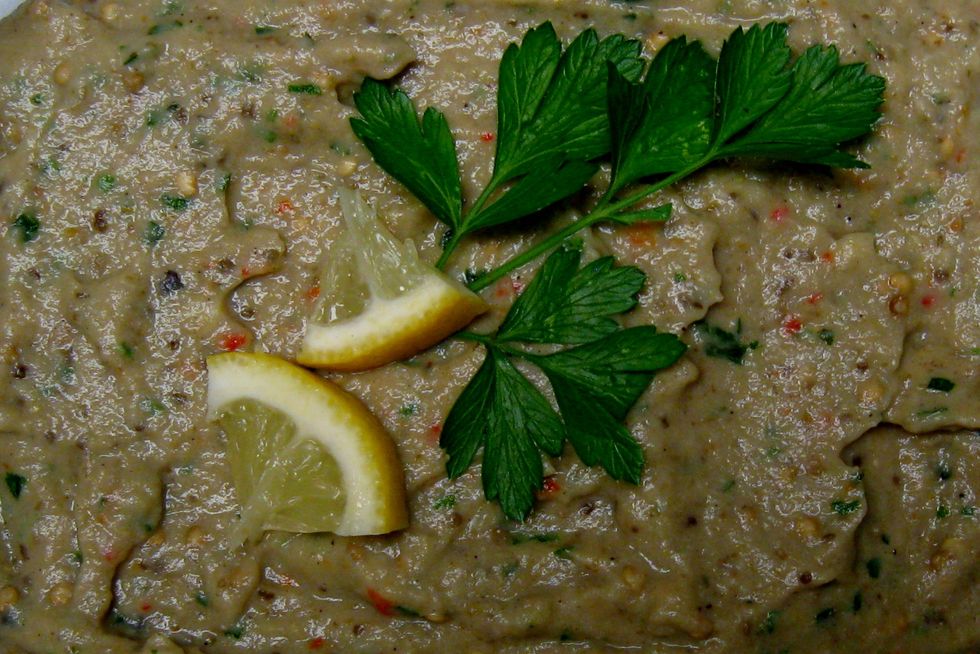 St. Dominic, whose feast day is August 8, was a pretty righteous dude who was concerned about the plight of the poor. He sold all his shit, walked around barefoot, did good deeds, and refused to sleep in a bed. One time, he and Francis of Assisi met and hugged. We know because there are a million works of art about it. It was pretty much like when Dylan toured with the Dead. In accordance with a troublesome tradition in Christianity, the organization founded by a righteous man produced some of history's great monsters (e.g., Torquemada, the Singing Nun).

Dominic abstained from eating meat, so he probably would have loved some baba ghanoush, especially in the heat of the summer when the eggplants are in season and cool dip-like dishes are especially refreshing. Before we get started, how about some cooking music?

3 cloves of garlic, or so

A little bit of fresh herbs from your garden (parsley, basil, oregano, etc.)

Juice of 1/2 lemon (shake juice from other half of lemon with 2 oz. whiskey and a dash of sugar)

Roast the eggplant, 2 of the garlic cloves (with their skin still on), and the optional cherry pepper.  If your charcoal grill is still hot from making burgers and franks, use that leftover heat. Otherwise, set your oven to 375-425 degrees. Poke the skin of the eggplant all over with a fork. Keep an eye on all this stuff. The garlic and pepper will cook faster than the eggplant, so you can put them in after the eggplant's been cooking a little while, or remove them early. That's your decision, and you'll have to live with the consequences. The eggplant will take 20-30 minutes depending on the size. You can flip it once or twice while it cooks. When it's very soft to the touch and looks like a freshly expelled placenta, it's done:

When the eggplant is cool enough to handle, put everything but the skin and stem into your food processor. The skin should peel right back, but you may need a knife to detach the stem. Squirt the roasted garlic out of its wrapper right on top of the eggplant flesh. Remove the skin, seeds, and stem from the cherry pepper and throw that in.

Add the remaining ingredients, the tahini last, all around the top of everything.

Zip it all up in the food processor, until it's nice and smooth. Not getting nice and smooth? Add a little more tahini, or drizzle in some olive oil while the processor zips.

Take a chance; scoop a taste with your finger right out of the food processor. Adjust seasoning to your liking.

Put the baba ghanoush into a tightly lidded refrigerator-safe container, and chill.

Enjoy with pita, crudités, tortilla chips, like mayo on a sandwich, or go nuts and use it as pasta sauce.

And don't forget to say the Rosary.