bill cassidy doing your homework english teachers legislative badass of the year award mark takano pt did you even read the assignment? revenge of the nerds rhetoric and composition 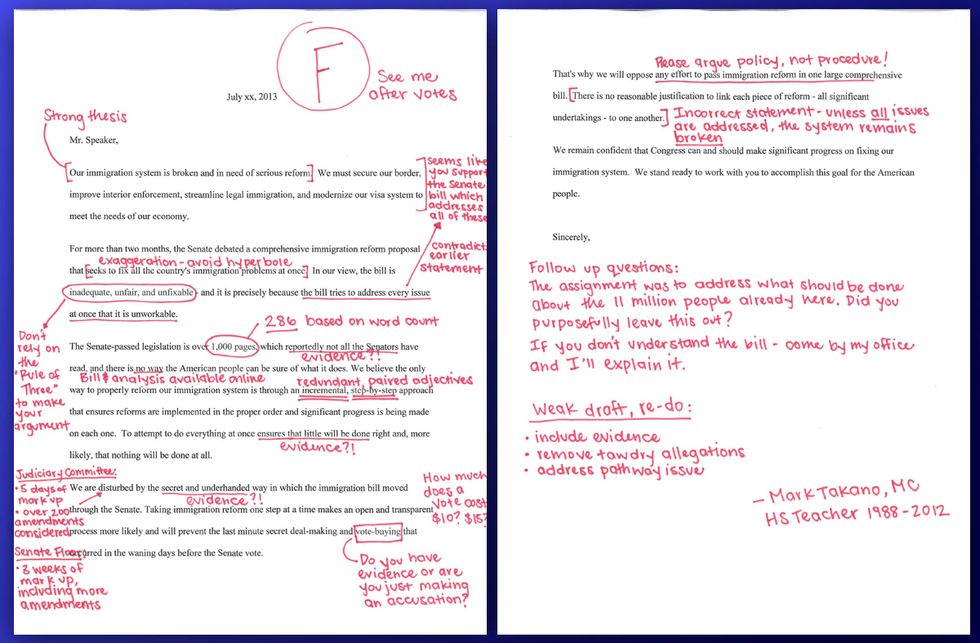 Looks like we have a new Legislative Badass on the block today! Rep. Mark Takano, a former high school literature teacher (and dedicatedchart geek), has taken his red pen to a "Dear Mr. Speaker" letter that House GOP members are circulating in opposition to the Senate's immigration reform bill (eyeball-friendly larger version here). It is a thing of beauty, from the initial encouragement of the student's efforts ("Strong thesis") to the succinct reminder of why the "essay" completely misses the point of the "assignment":

The assignment was to address what should be done about the 11 million people already here. Did you purposefully leave this out?

Ever the helpful teacher, Takano adds an invitation to help: "If you don't understand the bill -- come by my office and I'll explain it." And you just know that the students who really need to come by office hours never do. Takano's just going to be talking to the smart kids who'd get an A anyway.

In the Sekrit Wonkette Chatcave,  there was general agreement that there should be more of this sort of thing, seeing as how most writing by politicians is an endless gaping maw of hell, rhetoric and grammar wise. As a former college writing teacher, Yr. Doktor Zoom thinks Rep. Takano has done a special wonderful thing, especially with his takedown of the bullshit claim that somehow the Senate bill is bad because it's 100 pages long. We totally agree with Johnny McNulty at Happyblog:

Frankly, my favorite part is pointing out that given a proper word count, the bill is only 286 pages long. Why do I like this? Because "it's too long to read" is one of the GOP's new favorite reasons not to support things, which really does not help their anti-intellectual image. Obamacare, hate it or tolerate it, had about as many words as Harry Potter and the Order of the Phoenix, not that Congresspeople read at that grade level. Can we at least agree that Congress shouldn't sound so afraid of reading?

Not that Takano's efforts have been appreciated by everyone. Buzzfeed identifies the letter as originating with Louisiana Rep. Bill Cassidy, who probably thought it was a pretty kickass draft when he showed it to all his frat brothers. Cassidy responded to Takano's markup by saying that everybody hates mean old teachers:

"Representative Takano’s action and grandstanding represent everything Americans hate about Washington... My colleagues and I are absolutely going to keep requesting that the Speaker listen to the American people, not the big money interests and rank partisans trying to bully and intimidate members of Congress to quickly pass this massive amnesty bill."

Yes, Cassidy, it's smart people in Congress that are the real problem, what with their curve-wrecking and big brains, not the constant stream of whining obstructionists like you. What's next, you're going to go to Mr. Takano's office hour and tell him that you deserve an "A" because you thought about showing up for every class? Dude, there are tutoring services available -- go use them.