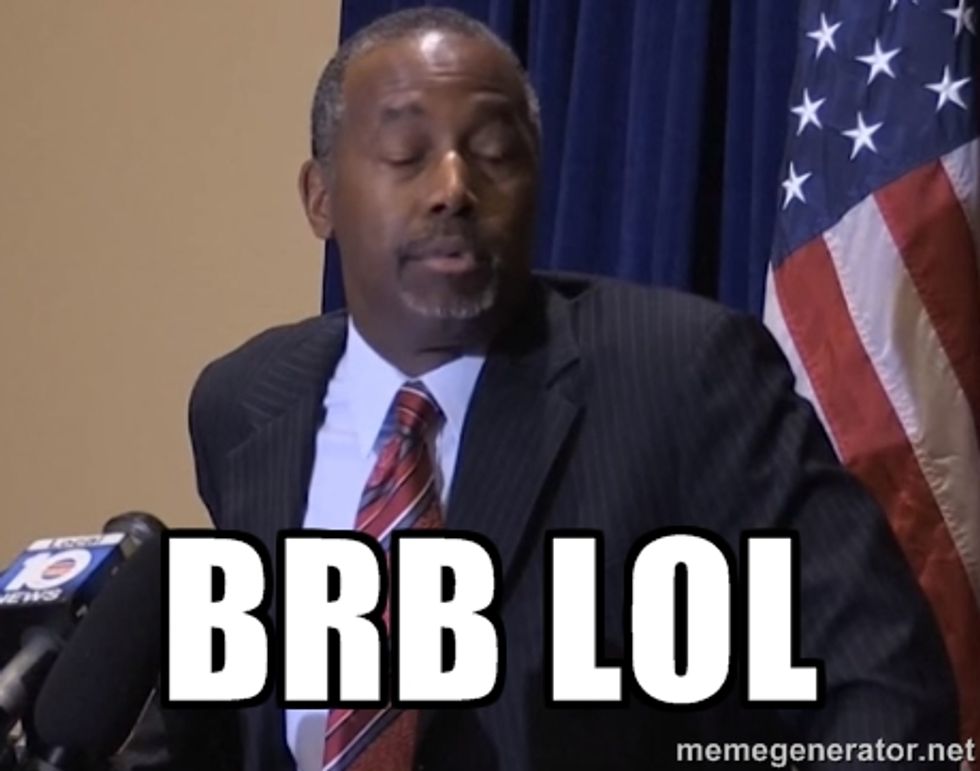 Uh oh, it's a day in 2016, which means it's time for the remaining GOP candidates to come together for spiteful purposes, infecting our television sets and Commodore 64 computers with bile and derp. Yes, we mean like in another debate. Yes, another one. Stop crying. No stop, seriously, we get uncomfortable when you cry. Ugh. Anyway, we have stupid answers to provide for the questions you didn't even want to ask.

What do you mean "Ben Carson-Shaped Hole In Their Hearts"?

[contextly_sidebar id="lWV2yigV7NTyyQ8ojlNtmDCkmXrhj4HK"]We mean he's not going to be there, fools, didn't you read Wonket Dot Com on Wednesday? He got his ass handed to him so many times during Super Tuesday that he doesn't see a "way forward" for his campaign, therefore he's going to go home and sleep, instead of sleeping on the debate stage like usual. He's not actually quitting his campaign though, because then he wouldn't be allowed to raise money off idiots like your Aunt Mabel.

Your FACE is Aunt Mabel libel, every time she has to look at it.

So did you happen to write a random paragraph a little while ago about how, when Carson writes the book about his run for president, he will make lies about how he WAS TOO at this debate, and how he winned it?

Rest assured, though, that when Dr. Ben Carson the brain surgeon writes his NEXT book, he will have definitely been at the debate, and he will have winned it. There will have been a West Point recruiter and a tour guide from the Egyptian pyramids, and they will have offered Carson a full scholarship and some delicious grain to chew on, respectively. He will have stayed awake the whole time, or at least long enough to stab a bunch of fools, and then cure everybody's prostate cancer with herbal supplements. (Yes, unfortunately at the imaginary version of the Republican debate, everybody will have prostate cancer, even the girls. It will also be held at the Popeyes Organization.)

Your mother thought so.

OK, so Trump, Rubio, Cruz, and for some reason Kasich. Is that right?

[contextly_sidebar id="N6kmdsmST86pwQs6xlBxIfwkpwrbmdGD"]Yes! Trump won MOST of Super Tuesday; Ted Cruz won Texas, Oklahoma and his dry-drunk dad's approval; and Marco Rubio's all giggle-'scited about his win in Minnesota. So they will be there. John Kasich won NOTHING, but we hear he's quite a hugger, so hide your kids, hide your wife, etc.

Did Marco Rubio high kick in the air SO HARD when he won Minnesota?

Oh yes he did! (Maybe, we don't know. We just wanted to use that meme we made again.)

You are so good at memes, Wonkette!

It's true! Want to see the one we made of Chris Christie again?

Chris Christie knows how to pick a winner SEE WHAT WE DID THERE?

Ooh, this debate is on Fox News! Is Megyn Kelly going to finally do Fight Club to Donald Trump's face, with her wherevers?

Good news: Donald Trump is not boycotting this time, which means he will be face to face with his arch-nemesis Megyn Kelly.

Bad news: Megyn Kelly is not looking for a fight.

Better news: We totally bet Megyn will vanquish Trump right in his eeny-meeny-miney-weenie if he pisses her off.

Bestest news: Megyn Kelly's husband apparently has a great dick, which just makes us happy for her, because #solidarity.

You CANNOT talk about political dick this much without posting a new picture from Canadian Prime Minister Justin Trudeau's Instagram.

HOW DID YOU TRICK US INTO INCLUDING HIM IN ANOTHER AMERICAN DEBATE PREVIEW POST?????

Here he is, all decked out and ready to march in the Toronto Pride Parade, because he is the best:

That's either a heart or he's making some other kind of gesture, we don't care.

All right fine, we'll watch the damn thing, as long as you're liveblogging.

All right fine, we'll liveblog the damn thing for you, as long as you send us booze money. Join us at 9 PM ET, and we will watch it together. You can watch on televisions on the Fox News Network, or you can stream it here, or you can not watch at all and just read our jokes, we don't care, YOU'RE NOT OUR REAL DAD.