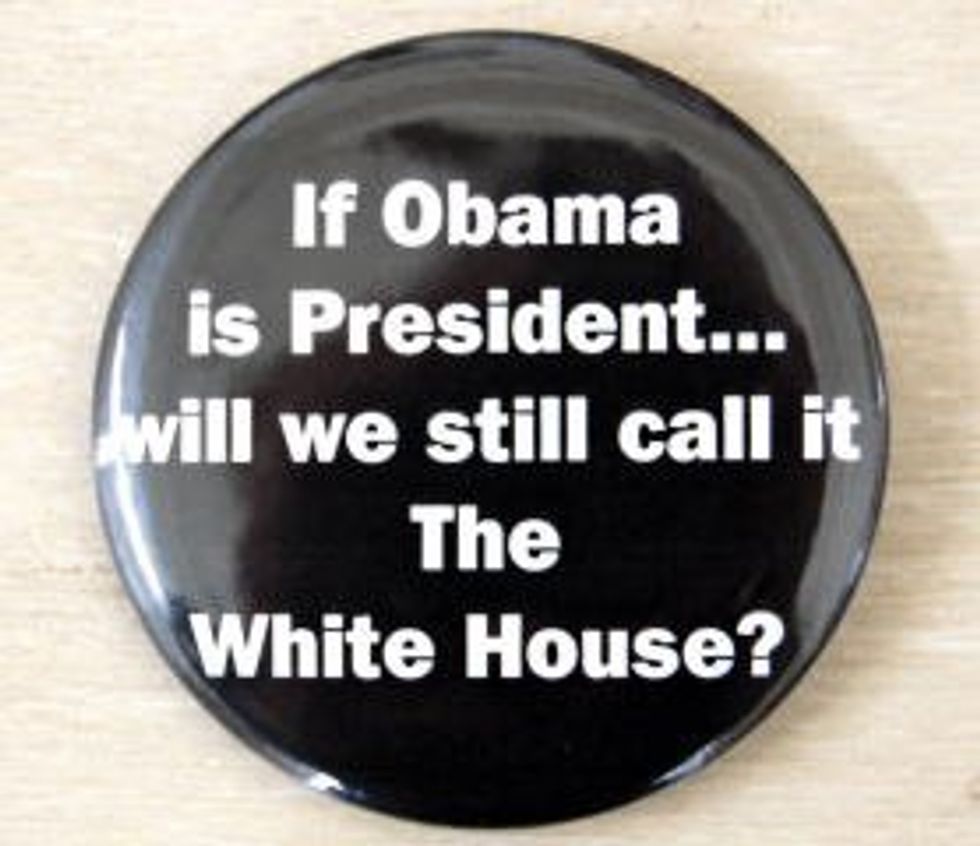 Yesterday the Internetsrevealed that a vendor at the Texas state GOP convention was selling dumb racist buttons. So today the state party sent out a sternly worded press release letting everybody know that Hate has no place in the Party of Lincoln: “This vendor [of the goofy button pictured left] need not apply to another Texas G.O.P. State Convention. The proceeds from their booth space will be donated to charity. We will tolerate nor profit from bigotry,” said Hans Klingler, a spokesman. We hope that NAMBLA appreciates all the hot dollars it gets from the terrible vendor's forfeited booth proceeds. Full press release after the jump.

Republican Party of Texas to Donate Proceeds from Disgraced Vendor

Sends Message that Bigotry Will Not Be Tolerated

Austin - The Republican Party of Texas on Wednesday announced it will donate the proceeds from a vendor who attempted to sell a disgracefully insensitive button during the just completed 2008 Republican State Convention in Houston. The vendor RepublicanMarket.com is a Florida based outlet who sells political paraphernalia via the internet and at state conventions all over the nation.

“This vendor need not apply to another Texas G.O.P. State Convention. The proceeds from their booth space will be donated to charity. We will tolerate nor profit from bigotry,” said Hans Klingler, Texas G.O.P. Spokesman.

Dallas Morning News Journalist Christy Hoppe appropriately brought the issue to the attention of R.P.T. officials on Tuesday. R.P.T. officials will be alerting the vendor today via letter about their intent and suggesting they clean up their act.

“Our state convention was energetic, unifying and positive. We will not allow any dishonor to be brought on our hardworking grassroots leaders by the actions of a misguided few. The Republican Party of Texas is proud of its principles, record and diversity,” Klingler continued.