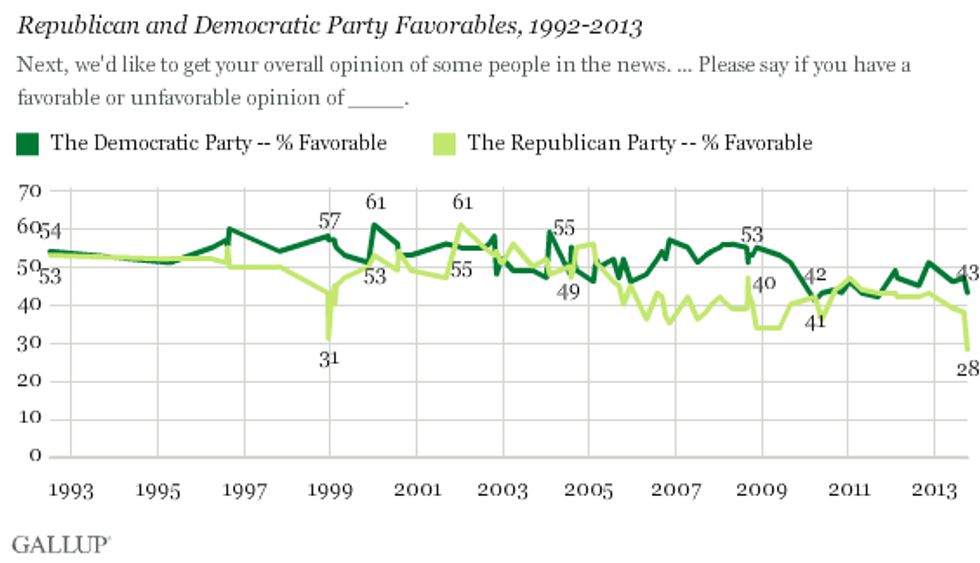 You see that picture up there, with the jaggedy lines? It's a "graph," and it shows that 28% of Americans have a favorable view of the Republican Party, according to Gallup. Maybe you think that's pretty good, considering that the Republican party can barely hide their contempt for most of America, and also that they're wrong about everything, plus or minus a thing (maybe, sometimes). But it's actually any party's worst poll result in the 20 years since Gallup first sounded the depths of America's hatred for the people they repeatedly vote into office.

While we don't know for sure, there's good circumstantial evidence that Republicans' historically low favorability is related to their refusal to fund the government unless Democrats let them make Obamacare worse. Say... all this talk of polls and approval has made us wonder: How are people liking their death panels so far?

Well, if Rasmussen is to be trusted, "45% of Likely U.S. Voters have at least a somewhat favorable opinion of the health care law." 45%! Why that's, uh, a lot of percent more than the other thing, what was it? Oh yeah, the percent of people who like the Republicans who are trying to repeal the "health care law"! Weird how that works, in a "democratic republic," huh?

Frankly though, we are having a hard time keeping a hard schadenfreude over this.

First of all, the midterms are over a year away, and swing voters -- don't you hate them? -- are probably going to forget that it was insane Republican demands that led to the shutdown and (maybe) caused a debt default. They'll blame "both sides" and base their vote on how much it costs to buy gas and anus burgers, like always.

Second of all, most Republican politicians don't care if only 28% of "Americans" view them favorably. All they're worried about is keeping the "Nobama is a socialist Muslim etcetera" crowd happy. By that measure, they're winning, after all.

Third of all, fuck this. Just, all of it. Fuck it with whatever ya got, the rustier the better. If anyone needs us, we'll be tainting some meat.