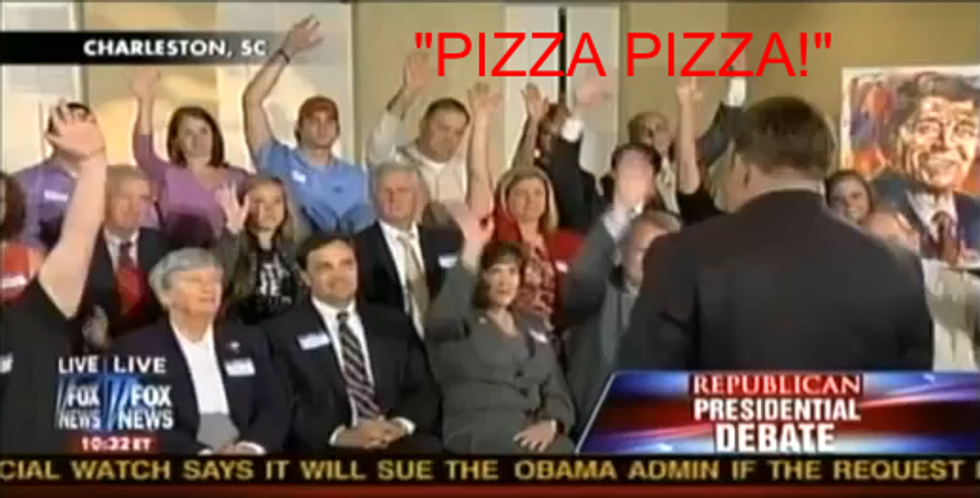 Before we turned off the teevee afterthat terrible debate last night, the Republican Party's appointed Divider, Frank Luntz, was doing what he always does, standing in front of the whitest people he could find in a few hours, asking them questions to find out how best to make people like this think their political opponents aren't human beings, much less American. But before he could get into that, he had to allow this restless group of people to express their sudden yet profound commitment to do whatever Herman Cain, the next president of the United States, says. He didn't just win the debate. He mopped the floor with them all. And it makes absolutely no sense.

We watched this debate too. Herman Cain didn't say anything special. He sounded like pretty much any other Republican, though his grasp of the issues was a little weak at times. But that's to be expected. The man's title on the chyron was "FORMER CEO OF GODFATHER'S PIZZA."

So what does this all mean? Americans love pizza, obviously, and would love to elect it president. Unfortunately, as much as everyone loves the Constitution, it says pizza is not eligible for the office. So Americans will just have to settle for electing pizza's friend, Herman Cain.

Also: this was a sample of white South Carolina Republicans. Do they think showing enthusiasm for the token black guy after the first, pointless debate will make up for all the things their state has done to black people over the years? Probably. [YouTube]