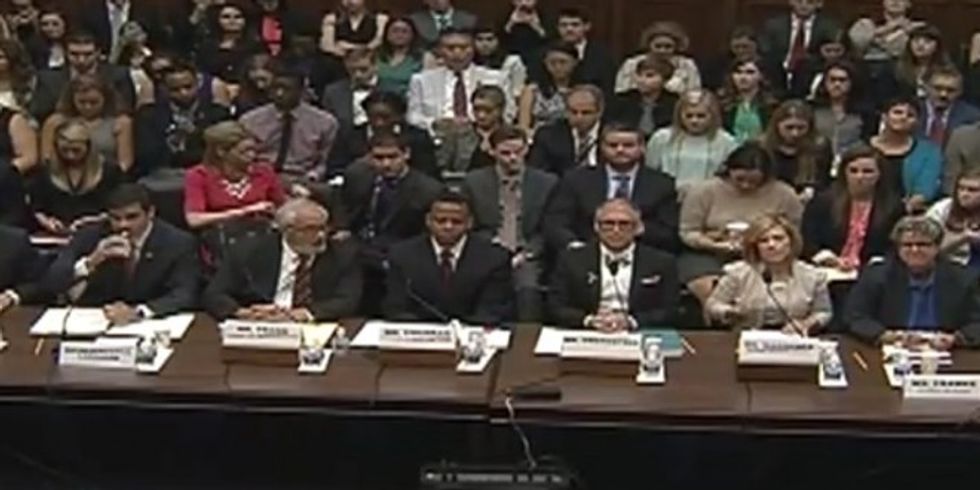 "Gee boss, it's starting to look like SAME SEX MARRIAGE will soon be the law of the land, what're we gonna do???" cried Idaho Congressman Raul Labrador into his plate of Chik-fil-A sammiches, "What if it becomes legal, and then federal employees can't even discriminate against gay married people no more! Even if they really, really, really wanna!"

"Dry your eyes there, Raul. Don't worry. I have a plan," said Senator Mike Lee.

And thus the First Amendment Defense Act was born maybe! Said act will allow government employees like Kim Davis to not do their jobs, or to discriminate against gay people, or to harass gay people, and keep their jobs and get paid. Because, you know, it's their First Amendment right to do that (it's not, but whatever). Today -- just a month after the shooting at a gay bar in Orlando -- that act is getting a hearing in Congress.

Prohibits the federal government from taking discriminatory action against a person on the basis that such person believes or acts in accordance with a religious belief or moral conviction that: (1) marriage is or should be recognized as the union of one man and one woman, or (2) sexual relations are properly reserved to such a marriage.

- alter the federal tax treatment of, cause any tax, penalty, or payment to be assessed against, or deny, delay, or revoke certain tax exemptions of any such person;

- disallow a deduction of any charitable contribution made to or by such person;

withhold, reduce, exclude, terminate, or otherwise deny any federal grant, contract, subcontract, cooperative agreement, loan, license, certification, accreditation, employment, or similar position or status from or to such person; or

Permits a person to assert an actual or threatened violation of this Act as a claim or defense in a judicial or administrative proceeding and to obtain compensatory damages or other appropriate relief against the federal government.

Authorizes the Attorney General to bring an action to enforce this Act against the Government Accountability Office or an establishment in the executive branch, other than the U.S. Postal Service or the Postal Regulatory Commission, that is not an executive department, military department, or government corporation.

Defines "person" as any person regardless of religious affiliation, including corporations and other entities regardless of for-profit or nonprofit status.

The primary face of this act is not Kim Davis, actually, but former Atlanta Fire Chief Kelvin Cochran, who lost his job after handing out copies of a book he wrote in which he discussed how terrible gay people are. Which is a pretty weird thing to do, particularly considering that there were LGBT people on the force. In any other situation -- like say, if he worked for me and I handed out copies of a book I wrote about how people named Kelvin are THE WORST to everyone -- that would be considered inappropriate workplace behavior at best, and harassment and discrimination at worst. But, Lee and Labrador feel that Cochran and those like him who believe that marriage is a union between a man and a woman should have special rights that allow them to discriminate against the gays.

Elizabeth Warren thinks it's pretty gross, and so do we!

The act would not protect anyone else's First Amendment rights, just those of people who are super mad about gay people getting married. So while an anti-gay federal employee would be free to not recognize same-sex marriage when doling out marriage certificates or handling joint tax returns or what-have-you, an anti-people-named-Kelvin person would not be able to refuse to do their job and refuse to do any work related to persons named Kelvin.

Once upon a time, the Right tried this exact same thing, except for with interracial dating and marriage. The first major cause for the Religious Right was actually not abortion, nor was it yelling at gay people for being gay, it was pushing for Bob Jones University to be allowed its tax-exempt status despite the fact that it did not allow interracial dating on its campus. And they lost! Like, by a lot. In 1983, the Supreme Court decided 8-1 that the government didn't need to be sponsoring that kind of bullshit. True story though, the University banned the practice right up until 1999.

It's hard to imagine an act like this passing any kind of constitutional test either, quite honestly. It's pretty much doomed to fail, just as every bill like it has failed in recent months. Maybe they should have taken more time to look around and smell the bigot-y roses while they were still able, and really appreciate the beauty of being allowed to be legally better than someone before it all came crashing down around them.