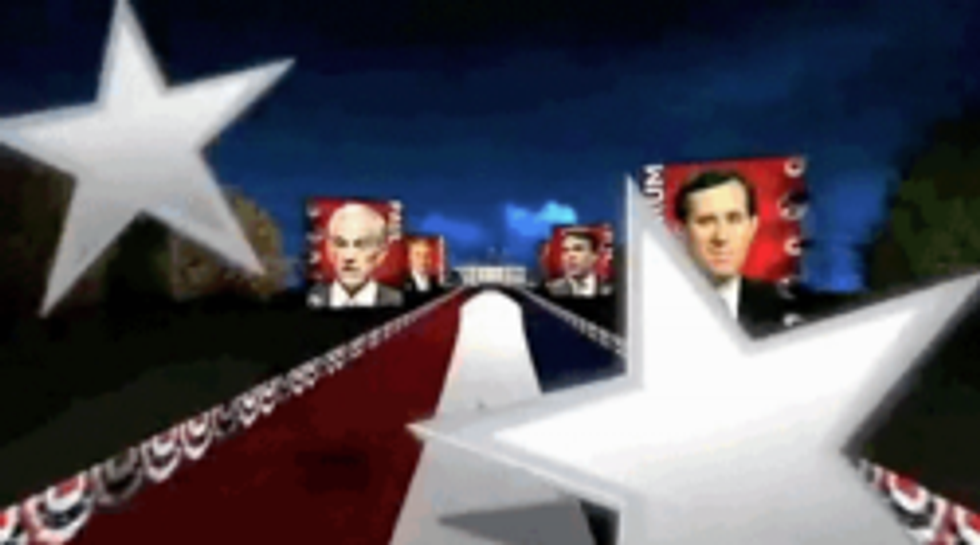 NEW YORK—You know, some of us who thought the Iraq War was a dumb idea might still be just a little bit bitter about having been accused time and again of being unpatriotic America-haters by war proponents on the Republican side of the aisle (ok, sure:more than a little bitter). And despite the fact that this line of attack was patently preposterous at the time, it was really brought into stark relief over the weekend when Republicans—the very same people who once accused anti-war Democrats of hating America—turned around and levied a brazen attack on the American people with back-to-back Republican debates in New Hampshire. It's a miracle any of us survived!

The bad news here is that none of these jerks is going to go away any time soon it seems, seeing how the expectations game now puts the bar for Romney's inevitable victory at 40%, which he won't hit, and so the show goes on to South Carolina, and then to Florida, and then to Super Tuesday, until we all go mad.

But about those debates. Oh. My. God. So let's forget about Saturday; that was generally unmemorable anyway apart from Perry's promise to re-invade Iraq. But Sunday! Boy, Sunday was something else.

So David Gregory kept doing this really bizarre thing? First when he announced, as a matter of fact, that we live in an Age of Austerity (as if this is simply A Thing That's Already Been Established and not, you know, just one side of arguably the single most important distinction voters will decide upon in November—whether to elect a party that will that will just gut every surviving remnant of the New Deal so it can cut taxes on the wealthy and still not do anything about the debt, or whether to elect a party that believes governments can actually be a force for good, especially in recessionary times), and then again when he asked candidate after candidate how they would Bring The Pain on the American people. Which was really weird? He kept saying it over and over again—"pain"—and kept coming back to that word in such a bizarrely fetishistic way as if to suggest that the financial wellbeing of the American people were some kind of monster truck rally and all he hoped to see was a big smash-up. Does Keith Olbermann still have a show? Because David Gregory sure ought to be today's Worst Person in the World.

But one thing that really stood out for us in particular was the exchange on gay rights—the one where, according to many pundits, Santorum and Romney both scored big points. Now here's how it went down: WHDH's Andy Hiller reminded Romney of a pledge the latter had made in '94 to "'be a voice in the Republican Party to foster anti-discimination efforts' in the gay community," and then asked what Romney had done in service of that pledge. Romney replied:

From the very beginning, in 1994, I said to the gay community, 'I do not favor same sex marriage,'” Romney said. “I oppose same sex marriage. But if people are looking for someone who will discriminate against gays or will in any way try and suggest that people that have different sexual orientations don't have full rights in this country, they won't find that in me.

Hiller shot back with “When's the last time that you stood up and spoke out for increasing gay rights?” which let Romney land a big applause line with "Right now"—and that's when our heads exploded. Because you don't say that!! When a candidate tells you he will not discriminate against gays but that he can't support gay marriage, you don't pitch him a meatball right down Broadway for him to just park into the upper deck, you say: "So then you would support civil unions, yes?"

Because as Ari Melber reminds us today, these are bad people. And they simply do not deserve applause lines on gay rights.

Anyway, one note of schadenfreude today: Pat Buchanan probably just lost his job at MSNBC after network executives didn't find themselves feeling so good about a few overtly racist passages in his latest book. Which is funny! Because they must've never read Death of the West before his job interview.

And lastly, we'd like to congratulate Jesus Christ this morning for a big victory last night at Mile High Stadium. Devoted disciple Tim Tebow—famous for chapter-and-versing "John 3:16" on his black eyepaint—led the Denver Broncos to an overtime victory against the Pittsburgh Steelers in which Tebow—and we kid you not—threw for 316 yards at—and again, we kid you not—an average of 31.6 yards per reception. Symbolism enough to make a believer out of any of us.