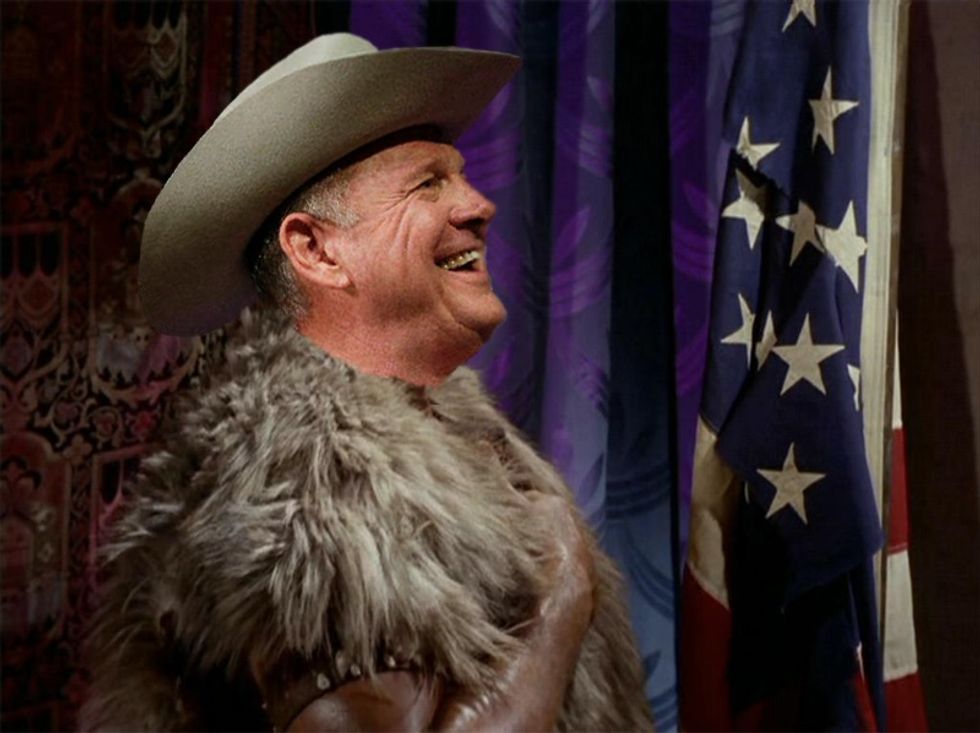 Every once in a while, Donald Trump is right about a thing! Although, when it happens, it's usually by accident. Take this conversation he had with radio hosts Rick and Bubba during the Alabama primary. From AL.com,

"Luther Strange is going to be a great Senator," Trump said. "He loves Alabama, he loves the state and he loves the country. He will absolutely win against the Democrat. Ray will have a hard time. If Luther wins, the Democrats will hardly fight. If Ray wins (Democrats) will pour in $30 million."

Turns out The Dotard was dead on about Democrats making a play for the Senate seat if "Ray" Moore won the primary! But no one expected it to come about because Moore is gross pervert child molester (ALLEGEDLY)! Well, no one except the entire population of Gadsden, Alabama, where he was known as a creep who stalked young girls at the mall and high school football games. On the plus side, though, the president will definitely remember Moore's name now!

The list of Republicans who have called for Moore to withdraw from the race is growing by the hour. Even Ted Cruz finally tapped out, so you know the GOP has decided that no amount of massaging the fleshy loins of Alabama's evangelical voters can save this seat. Mitch McConnell says he believes Moore's accusers and is cutting off the NRSC money spigot.

Which will probably give Moore one more burst of support from the pitchfork brigade.

The person who should step aside is @SenateMajLdr Mitch McConnell. He has failed conservatives and must be replaced. #DrainTheSwamp

And Steve Bannon has been able to cut his Cialis dose in half, since he gets tingly just thinking about going to war with Mitch McConnell over the Alabama Senate seat.

But the polls were trending away from Moore even before the fifth accuser came forward with her yearbook yesterday.

We reckon there's probably more women out there with a story to tell. And all bets are off if it turns out Ol' Roy touched a boy child once or twice, instead of restricting himself to molesting teenage girls like a "normal" guy. We're deep into some weird shit here. But let's try to game out the possibilities in Alabama from where we stand today.

Republicans would greatly appreciate if Moore would GTFO of this race. If Moore decides that God's higher plan involves him going home to spend more time fondling his ten commandments statues, Republicans would likely mount a write-in campaign to elect Luther Strange. Hey, it worked for Lisa Murkowski in Alaska! And given that large swaths of the Alabama electorate think Democrats are fork-tongued baby killers, we assume it would work there, too. But Roy Moore is an ornery sumbitch who swears he's in it 'til the bitter end, so good luck with that one Republicans!

In April, Governor Robert "Horndog" Bentley resigned to spend more time figuring out how to sext his girlfriend without cc-ing his wife. New Governor Kay Ivey immediately bumped the Senate election up from November of 2018 to this fall. Now that the thing has turned into a giant clusterfuck, national Republicans are calling on Ivey to kick it out a year to give them time to deal with Moore. Or hell, even three years out, so that Luther Strange could sit for the rest of Jeff Sessions' term.

But no dice. Ivey has to run again herself in 2018, and she saw that same JMC poll we all did.

Governor Ivey has no intention of pissing off the evangelical howler monkeys who think Roy Moore is being persecuted by Northern heathens for courting young girls like in Bibletimes. She's sitting this one all the way out.

It could happen! We could actually take this seat, if Republicans stay home or cast a protest vote for Strange/Sessions/Jesus. Democrats hold the seat for three years, bringing the Senate to 51-49. Mitch McConnell and national Republicans breathe a secret sigh of relief because, worst of all for them is ...

Even before they knew he was a pedophile, national Republicans were running away from Roy Moore as fast as they could. The guy's a maniac who never follows the law and would rather grandstand than horsetrade. They do not want to spend all day arguing about whether he can erect a ten commandments statue outside his office, and they do not intend to have their tax plan derailed by a lunatic who refuses to vote for anything that doesn't de-fund Planned Parenthood.

If Moore is sworn in, Democrats will run Grand Old Pedophile Caucus ads against every Republican Senator and Congressman in the country. They'll get killed in 2018. Republicans are getting increasingly desperate. Maybe they'll refuse to seat him! Or expel him right after he's sworn in! Hell, maybe they'll pull off a Frank-Luntz-axel by forcing Sessions back into his old seat, appointing a new Attorney General, and killing the Mueller investigation. (Hahahaha! No they won't.)

Jeff Flake even remembered to pretend to be a principled conservative again.

Just to be clear. If the choice is between Roy Moore and a Democrat, I would run to the polling place to vote for the Democrat https://t.co/Ec96HRt228

Yeah, Republicans are shit scared that Moore might actually win this race!

It's all very weird, but never fear, Wonkers! Fox News is here with the hottest take.

Ed Rollins: Dem. Party is in total disarray. They can say what they want about Trump, but we're moving forward. They're moving backwards. pic.twitter.com/5yJBwNBcqD

That's right. Republicans are going to war over this Senate seat and Democrats swept Virginia last week, but don't be fooled! We're totally fucked, you guys!

Also, this is great news for John McCain!