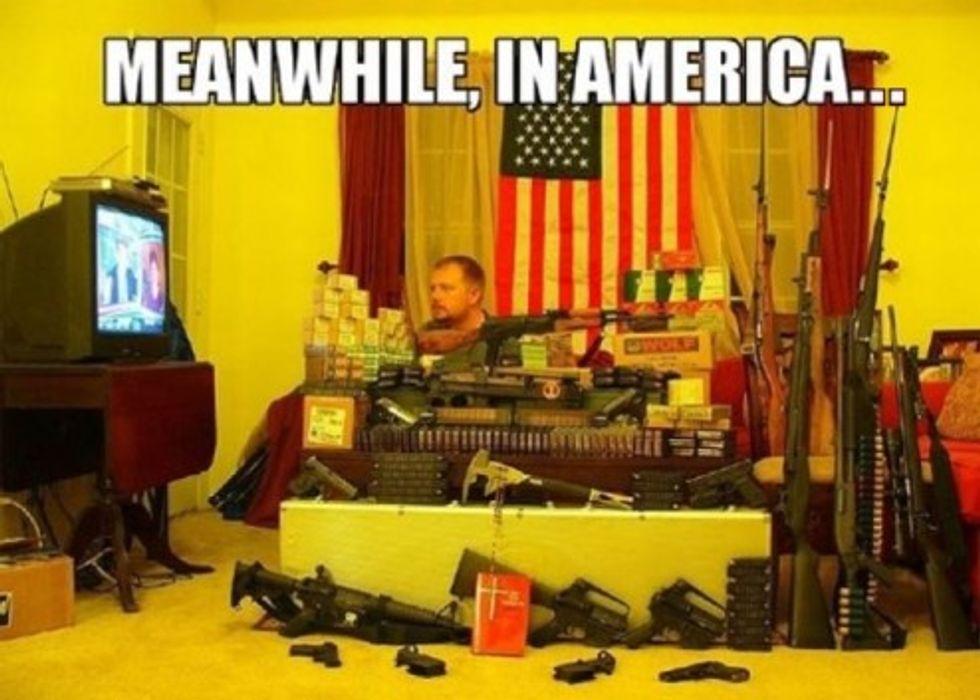 Hey, well-regulated militia, how's the responsible gun ownership going lately? If we're doing a Gun Roundup, seems like we're pretty much required to start with Florida, so here's a story of a Responsible Gun Owner protecting his life from someone whothreatened his rightful place on the road: On Friday,

83-year-old Mario Perez-Tano was stopped at a traffic light in downtown Miami when another driver pulled in front of his Volkswagen Beetle.

Perez-Tano blocked in the other vehicle as it pulled out of a tire shop and got out of his car to confront the driver with a .38-caliber handgun, authorities said.

That sounds pretty much like what the Founders had in mind! If you don't take down those who cut you off in traffic, before you know it they'll be quartering British troops in your living room.

After firing one shot at the other driver's tires and another through his passenger-side window, Perez-Tano then chased the fleeing offender, who almost escaped justice, but then both cars had to stop for a drawbridge. At that point, police arrested Perez-Tano, because there is just no understanding of the Second Amendment right to blow away anyone who pisses you off. Perez-Tano has been charged with attempted murder.

In Maryland, another Responsible Gun Owner was charged with first and second degree murder after shooting and killing a friend who wanted him to help test out a bulletproof vest. No, this is not a rerun of a story from May, this is a completely different pair of idiots. Mark Ramiro and friend Darnell Mitchell decided last week to videotape themselves testing out the awesome stopping power of a bulletproof vest. We bet it would have looked great on YouTube, except that after Mitchell put on the vest and said into the camera that he was ready to take a "deuce deuce in the chest," Ramiro fired a .22-caliber handgun at Mitchell but missed the vest. Ramiro and another friend rushed Mitchell to a hospital, but he was dead on arrival. This should be a very important lesson for responsible gun owners: when shooting a friend for fun, make sure that your sights are set correctly!

And in Southpoint, Michigan, a responsible gun-owning lady has been released on bond while she appeals the 2013 shooting of her boyfriend, whom she suspected of having an affair. In her opinion, he had not ejaculated enough while they had sex, which she believed was evidence that he was spilling his seed with, on, or in someone else. Sadie Bell, 58, was released last week on $10,000 bond while she appeals the 10-year sentence in the shooting.

Bell, 58, was sentenced on June 26 after being convicted of intent to do great bodily harm, plus felony firearm, after she wounded Edward Lee, her married boyfriend of 15 years [...]

In a later statement, Bell said she was upset by Lee’s poor performance. She also accused him of cheating on her after noting that he hadn’t produced much ejaculate after their tryst.

“She was pretty graphic about why she had shot him,” Assistant Oakland County Prosecutor Paul Walton said. “She was convinced he was having an affair. She reached this conclusion by the fact that he didn’t produce enough ejaculate. So she shot him in the stomach.”

Bell also shot her husband in 1991, but because he refused to cooperate with police, she was not prosecuted. No information on the volume of his ejaculate was available at press time.

While the NRA does not appear to have had any comments on these three shootings, it should be noted that during the gunplay, there were no attempts by the federal government to become a tyrannical dictatorship, which means the Second Amendment is working exactly as intended.