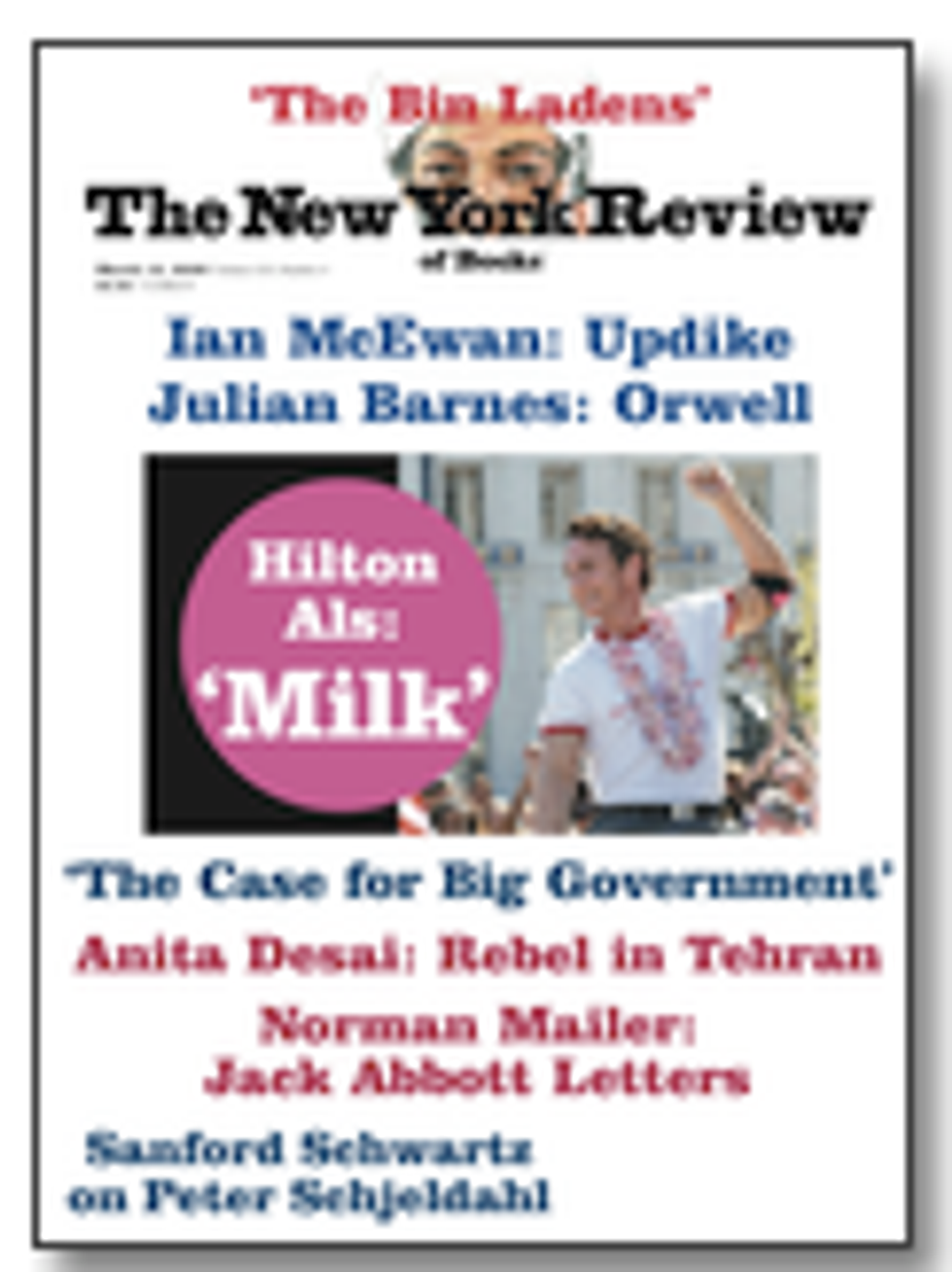 Well, well, let's take a look-see at theNew York Review of Books. There's some political stuff in here, yes? Sure there is. Besides, in a few months, the only magazines left in America will be a receipt for rice and dried fruit, and even that will be probably be a blog, and owned by Tina Brown. And plus, Steve Coll, a member of the original cast from last week's magazine discussion, has returned.

"One Big Unhappy Family": Fred Halliday takes on a new book by Steve Coll about Saudi Arabia. Meet the bin Ladens! They're a wealthy, influential, and politically well-connected family in Saudi Arabia. Like the Kennedys, kind of?, in the least imposing-a-Western-prism-y way as possible. So apparently, what Coll does is use these people to talk about The Way Saudi Arabians Live Now. Still, he does delve into the psychology of Osama, who is I guess the Caroline Kennedy here except even Osama bin Laden could have probably managed to secure that Senate seat. Anyway, Halliday gives Coll credit for debunking the following Osama urban legends: that ObL was something of a lazy trust-fund kid, that he wanted to "bring down" America, and that he is some sort of weirdo stuck in the middle ages. The more you know! [One Big Unhappy Family]

"Revolutionary Road":  Hilton Als has seen the Milk biopic. Except it's not a biopic at all—it's a gayopic, and gay, New Yorker theater critic Als doesn't take too kindly to its homosexual stereotypes, for instance, the insinuation that gays love the theater! But the film is actually effective, see, because even if we don't get to know our hero, we're still moved by his story. Als especially likes how director Gus Van Sant included, in the beginning and end, black and white footage of the real players. In summation, Milk is pretty to look at, and Emile Hirsch and Sean Penn play quite well off of one another, professionally. [Revolutionary Road]

"Such, Such Was Eric Blair": Eric Blair, as Julian Barnes takes literally about 800 words to announce, is the "Hannah Montana" to George Orwell's "Miley Cyrus." Barnes' long review of three new Orwell books does a few things. First, Barnes commits the Cardinal Sin Of Literary Theory by making biographic deductions about Orwell using the writer's characters. The authors is dead, etc.! Anyway, Eric Miley Montana Orwell actually is dead, literally, and Barnes tries to piece together his legacy. He's quite popular! On the right, on the left, everywhere really. Except this popularity sort of means that Orwell sometimes held contradictory ideas in his head at the same time. (A populist but a snob, a British person who relied on his Britishness but condemned it in others, etc.) Let's call this phenomenon "doublethink." It will be revelatory. [Such, Such Was Eric Blair]