Rex Tillerson Has Fun Sleepover With Murderous Philippines President, Like BFFs Do 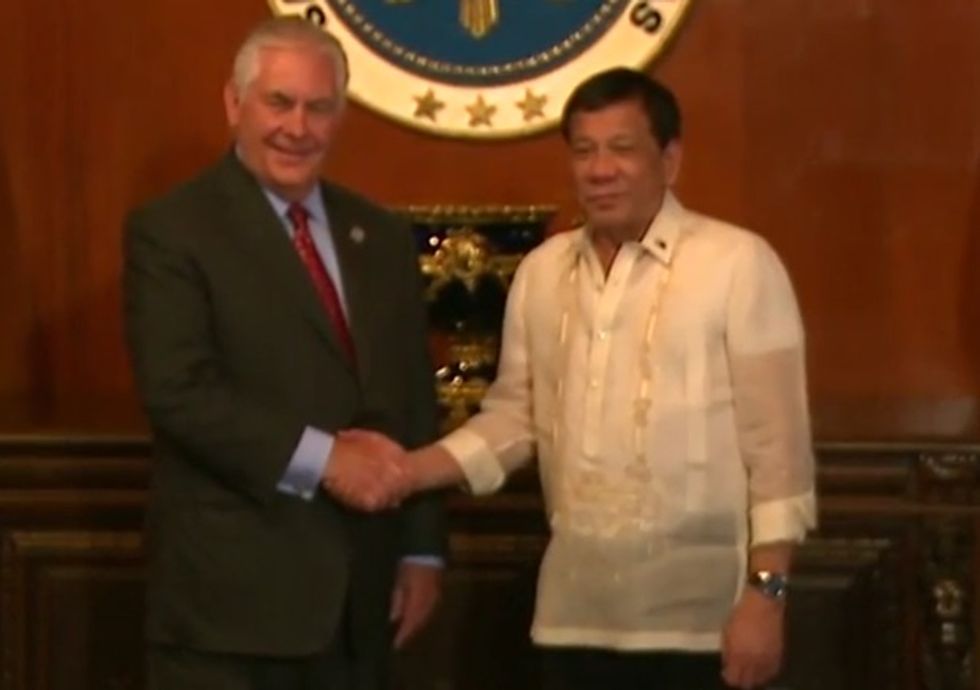 What are a few human rights violations between such good pals?

On the sidelines of an ASEAN meeting on security in Manila Monday, Philippines president Rodrigo Duterte met with U.S. Secretary of State Rex Tillerson, catching him between naps and assuring him Duterte thinks the USA is the bee's knees. Duterte has had some mean things to say about the USA in the past, especially Barack Obama, whom he called a "son of a bitch" (or "son of a whore" depending on your English/Tagalog translation preference) because Obama had condemned Duterte's murderous campaign of extrajudicial killings of drug dealers and addicts. But Duterte likes Donald Trump, who has praised him for doing "an unbelievable job on the drug problem," possibly because he recognizes a kindred spirit, and he told Tillerson, "I am your humble friend in Southeast Asia."

We'd assume Duterte would have invited Tillerson on a midnight jaunt through the slums of Manila, shooting suspected drug users from an armored vehicle, but the Secretary of State needed a full night of sleep.

At the summit, Tillerson confirmed the US would continue to provide assistance to the Manila government in its war against ISIS-aligned rebels in the southern part of the nation. The US has helped out with training, surveillance, and air support, including light aircraft and drones.

"We are providing [the Philippines] some training and some guidance in terms of how to deal with an enemy that fights in ways that is not like most people have ever had to deal with so it’s a tragic situation down there," Tillerson said[.]

Oh god. He's starting to talk like Trump, too.

Tillerson said he believes the Philippines is winning the war against the rebels, but added:

the real challenge would come when the fighting was over and "creating the conditions on the ground to ensure it does not re-emerge."

[wonkbar]<a href="http://www.wonkette.com/607113/filipino-donald-trump-ok-with-being-called-hitler-as-long-as-he-slaughters-the-right-people"></a>[/wonkbar]For instance, will the government be able to assure there's sufficient stability that it can take up its own campaign of terror against the populace in the name of eradicating drugs, drug dealers, drug users, and guys named Doug, just to be sure? Vigilantes and police have killed at least 7,000 in the name of wiping out drugs, and Duterte has said he'd be proud to be compared with Hitler just as long as he could truly commit genocide against drug users.

Asked about the human rights situation in the Philippines, and whether providing military aid to Duterte risked sending the message that America is indifferent to human rights, Tillerson said it was no big:

“We see no conflict at all in our helping them with that situation and our views of the human rights concerns we have with respect to how they carry out their counter narcotics activities.”

Besides, Tillerson might as well have said, if allies with terrible human rights records haven't figured out yet that we stopped giving two shits about human rights as of January 20, they haven't been paying attention. We might lob a few missiles if the president feels sad over some dead children he saw on TV, but for the most part, if human rights abuses don't make it to Fox News, they won't break the surface of Trump's awareness.

Duterte, asked what he and Tillerson had talked about in private, refused to say, because he's that much of a gentleman. But he made it clear there's one thing reporters damn well better not bring up:

"Human rights, son of a bitch," Duterte said, arguing he shouldn't be questioned about alleged violations given the challenges he's facing. "Policemen and soldiers have died on me. The war now in Marawi, what caused it but drugs? So human rights, don't go there."

[wonkbar]<a href="http://www.wonkette.com/617659/donald-trump-tells-philippines-dictator-hes-doing-terrific-job-of-murder"></a>[/wonkbar]Duterte's pretty sensitive about all that. You wouldn't want to make him feel bad, now would you? As for Donald Trump's invitation to come visit him in the White House and maybe shoot some of our poor people for sport (OK fine, Trump didn't actually invite him to do that), Duterte has been less than enthusiastic, responding to the news that an American lawmaker would attempt to block such a visit by saying he wouldn't want to come anyway: "I've seen America and it's lousy."

Looks like we'll have to work hard if we're going to meet the discriminating tastes of a sociopathic mass murderer, huh?

Wonkette salaries are fully funded by folks like you! If you love us, click below to pay our salaries!