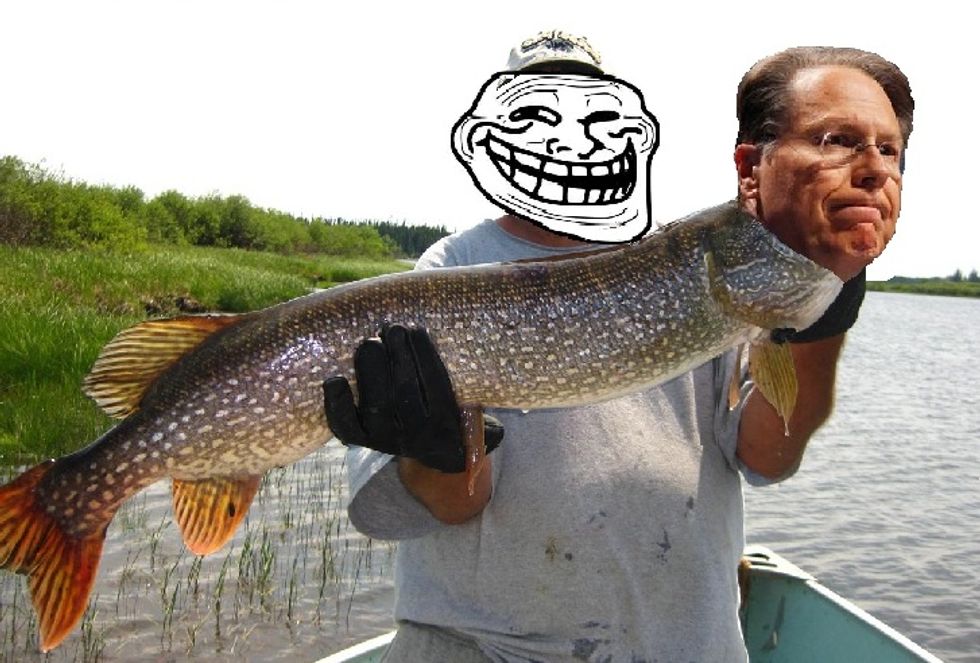 We put LaPierre's head on a pike, get it?

[Updated 12/22/12; see end] So, after the Newtown massacre last Friday, Erik Loomis, a University of Rhode Island history professor, got on the Twitter Machine and expressed the sort of outrage that a lot of people were feeling that day toward the Gun Lobby and its chief:

I was heartbroken in the first 20 mass murders. Now I want Wayne LaPierre's head on a stick.

On the internet, this sort of comment is pretty much what you call "mild." However, Erik Loomis is not merely an academic; he is also a blogger at Lawyers, Guns & Money, and so he is someone whose comments get noticed in the Angersphere. The Daily Caller, for instance, said that Loomis "unleashed a flurry of profanity-ridden tweets demanding death for National Rifle Association executive Wayne LaPierre." Other wingnuts soon followed in accusing Loomis of making "death threats" against LaPierre, including a genius whose blog breathlessly announced Professor calls for assassination of NRA CEO.

And so, it only stands to reason that campus and state police were sent to meet with Loomis after they received multiple reports that he had made death threats; eventually, Loomis began receiving actual death threats of the "I am going to kill you" rather than the metaphorical variety. The university is also receiving many calls and emails calling for Loomis to lose his job -- he is not yet tenured. But remember, he started it.

Just to add in a little extra surrealism, because maybe the story was lacking it up to this point, University of Rhode Island President David M. Dooley issued a statement explaining that

The University of Rhode Island does not condone acts or threats of violence. These remarks do not reflect the views of the institution and Erik Loomis does not speak on behalf of the University. The University is committed to fostering a safe, inclusive and equitable culture that aspires to promote positive change.

Which suggests that perhaps the university president is unaware of the existence of metaphors.

Loomis has since posted a clarification of his intended meaning:

So to clarify, I want to make it blindingly clear that I did not call for the assassination of Wayne LaPierre. In my world, calling for someone's head on a stick is a metaphor to hold them responsible for their actions. I think the last time “head on a stick" actually meant murder was sometime around 1450. That anyone would take this seriously as a murder threat is completely absurd. What stinks about it is that it has now involved my family, colleagues, and university. So I'll apologize to them and to anyone legitimately offended by my metaphor.

Notice how this so-called "historian" utterly ignores the far more recent use of the guillotine in the French Revolution, and we are pretty sure that there were heads on sticks in the movie Apocalypse Now, which was set in about 1970. So decapitation and cranial stick-mounting is clearly a very literal thing.

Loomis also tries to weasel out of responsibility for his call for the very literal beheading of a human being by suggesting that his personal experiences somehow justify an angry outburst, simply because 26 people were murdered with a semiautomatic freedom-machine that morning:

In 1998, my high school Spanish teacher was killed by her son Kip Kinkel before he went to his own high school and opened fire, killing 2 students and wounded 15. This is personal stuff to me.

Loomis even has the audacity to suggest that the people who say he's calling for someone to chop off Wayne LaPierre's head with a sharp instument of some sort and then display his lifeless, severed head on a pole are somehow hypocritical simply because they use similar figurative -- and sometimes literal -- language:

These people KNOW I am not calling for LaPierre's assassination. They use language far surpassing anything I would ever say all the time. Here is Glenn Reynolds, so outraged by my intemperate language, asking “can we see some heads roll" over the Benghazi attacks. Does Reynolds literally want to see the head of Susan Rice decapitated from her body? Of course not. It's a metaphor. I wouldn't have even looked twice at that line because I know exactly what he means, even if I disagree with him. Not to mention that Reynolds has quite literally called for the assassination of Iranian nuclear scientists. But I am today's subject of the right-wing Two Minute Hate. Tomorrow it will be some other poor sap. This is all a game to these extremists, seeking to turn the tragedy of Newtown to focus on the real victims here -- American white conservative gun owners.

Typical liberal postmodern weasel-words, if you ask us. As we all know, the Left is full of murderers who shoot up churches, murder doctors, and call for the literal death penalty for political opponents, while the Right only talks about revolutions and shedding the blood of tyrants in metaphorical terms.

The Crooked Timber blog has been serving as something of a clearinghouse for academic support for Dr. Loomis's free speech, and has asked readers to contact URI to resist wingnuts' calls for him to be fired. As noted, he is not yet tenured, and hence is vulnerable to threats.

Dr. Loomis should probably just be glad that one of his other tweets from last Friday -- "Fuck the NRA" -- was not interpreted as a desire for sexual congress with each of that organization's 4 million (maybe) members.

Check out Wonkette on Facebook and Twitter and even on Tumblr. And if you think you can handle occasional simile, hyperbole, synecdoche, or even litotes, Doktor Zoom is on Twitter, also, too.