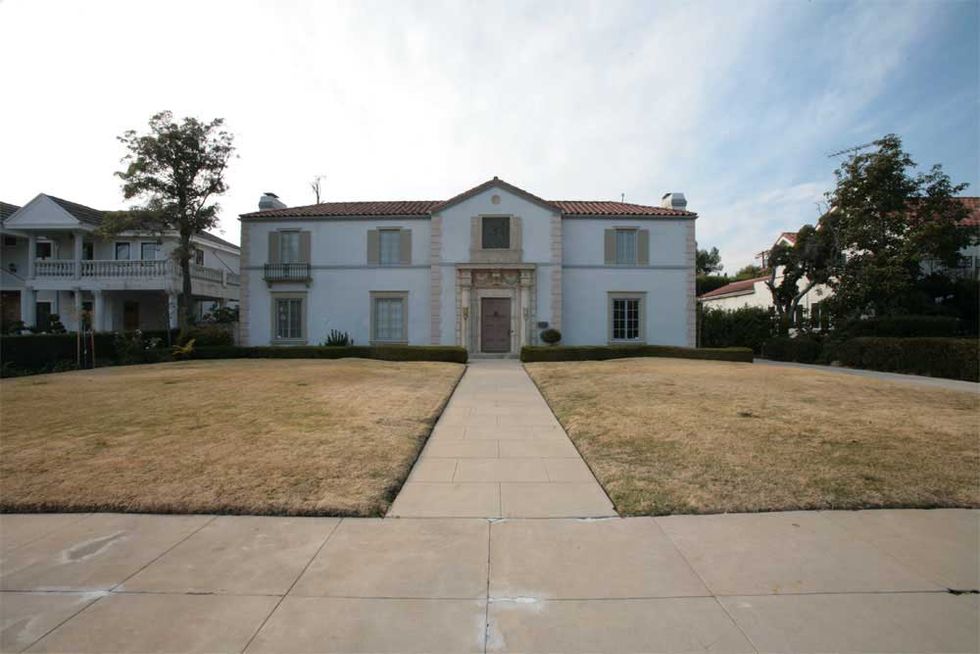 You may have heard that California is all out of water. Again. This is a thing that happens frequently -- not because of abortion, or pagans, or Obama's policies on Israel -- but because the state is mostly a desert and does not make enough water to support California's addiction to perfectly manicured lawns, swimming pools, and hydrated sidewalks. Gov. Jerry Brown has told Californians to stop wasting all the water, because seriously, people, there is no more left. But rich fucks, being rich fucks, don't give a fuck. The state is not the boss of them, and they'll waste all the water they want, because they are better than the rest of us:

Drought or no drought, Steve Yuhas resents the idea that it is somehow shameful to be a water hog. If you can pay for it, he argues, you should get your water.

People “should not be forced to live on property with brown lawns, golf on brown courses or apologize for wanting their gardens to be beautiful,” Yuhas fumed recently on social media. “We pay significant property taxes based on where we live,” he added in an interview. “And, no, we’re not all equal when it comes to water.”

Oh, the horror. Forced to live with brown lawns (or, you know, dig that shit up and put in some drought-resistant landscaping). Even though Yuhas, who is a conservative radio host, is rich and pays taxes and is more equal than those dirty poors who can't afford to pay fines for excessive water use. Obviously, we'd like to invite Yuhas to the front of the up-against-the-wall line. And we'd like him to take all of his rich fuck friends and neighbors with him. See, Yuhas lives in Rancho Santa Fe, which is an uber-rich suburb in Southern California -- one of the uber-richest in the country, in fact. You'll be so not shocked to know that it's a very Republican area where people live in gated communities and play lots of golf. Like Yuhas, many of them think they have a right to use all of the state's water because they're so fucking rich, they shouldn't have to conserve water like the rest of us. Which is why, after the governor mandated a 25 percent reduction in water use throughout the state, Rancho Santa Fe's water use went up. Because the governor isn't going to tell those country club McMansion schmucks they can't have their lush green lawns. Sure, the state may be all out of water, but according to these rich fucks, as long as they're willing to pay the penalties, so what? Except they're none too happy about having to pay the penalties either, because that is SO mean and SO unfair, boo hoo sadface waaaaaah:

“I think we’re being overly penalized, and we’re certainly being overly scrutinized by the world,” said Gay Butler, an interior designer out for a trail ride on her show horse, Bear. She said her water bill averages about $800 a month.

“It angers me because people aren’t looking at the overall picture,” Butler said. “What are we supposed to do, just have dirt around our house on four acres?”

Um, yes? Yes, that's exactly what you're supposed to do, obnoxious rich lady with your four acres. What part of WE ARE ALL OUT OF WATER do you not understand? What part of WE'LL ALL BE SCREWED is confusing? But if you're so angry about it, perhaps you might want to enlisti in this other rich fuck's private army to fight back in the "war":

“I call it the war on suburbia,” said Brett Barbre, who lives in the Orange County community of Yorba City, another exceptionally wealthy Zip code. [...]

He is fond of referring to his watering hose with Charlton Heston’s famous quote about guns: “They’ll have to pry it from my cold, dead hands.”

“California used to be the land of opportunity and freedom,” Barbre said. “It’s slowly becoming the land of one group telling everybody else how they think everybody should live their lives.”

The Constitution does not actually protect your "right" to keep the acres surrounding your estate emerald green. Nor does it prohibit other citizens from publicly shaming rich fucks for being rich fucks who refuse to do their part to save the last drops of California's water before it's all gone FOR EVERYONE. And while we try not to hate rich people for being rich, these rich fucks? The ones who think California's water crisis doesn't apply to them, because of all that money they have, so fuck everyone else? Fuck ’em. Hard. And the show horse they rode in on, across their endless acres of perfectly manicured lawns.