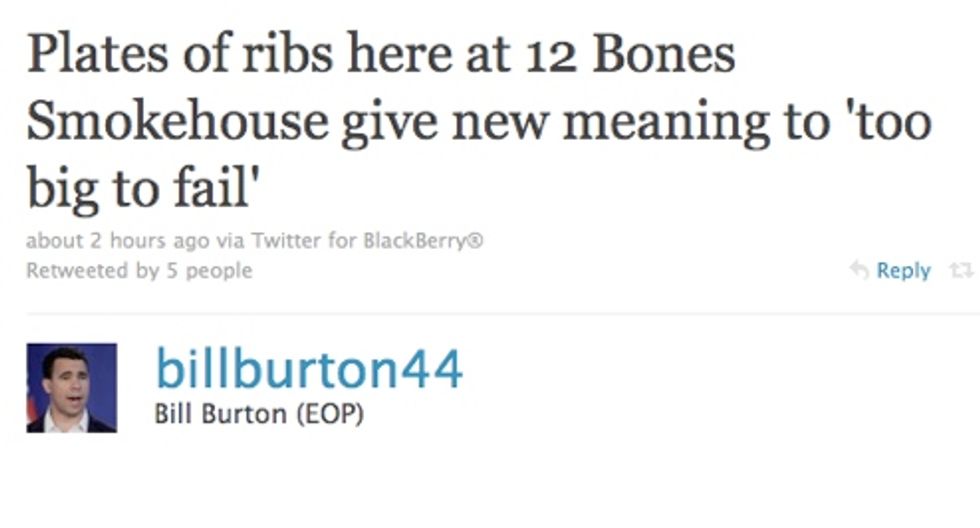 What are you doing this weekend, average Wonkette reader? Replacing that blow-up sex doll you stabbed mercilesslylast weekend? Come on, this is the sixth one, when will you be content with sexing it "normally"? ANYWAY, Barack Obama and family are spending their weekend at Asheville, North Carolina's luxurious Grove Park Inn Resort & Golf Course & Resort & Golf Course! What things are they doing that you'll never do? The extremely hilarious joke from deputy press secretary Bill Burton up top gives you a clue: they're eating food! Are they aliens?

ASHEVILLE, N.C. — First stop for the first couple's weekend vacation on Friday was a roadside restaurant that President Barack Obama visited during the final month of his White House campaign. First meal on the trip: barbecued ribs.

Obama and first lady Michelle Obama landed in the Blue Ridge Mountains and made a quick stop at Twelve Bones Smokehouse on the way to their resort. The White House said the first couple ate ribs, macaroni and cheese, greens, baked beans, corn bread and corn pudding and washed it down with sweet tea.

And then a short time later, they set about working off the meal; the Obamas went on a mountain hike.