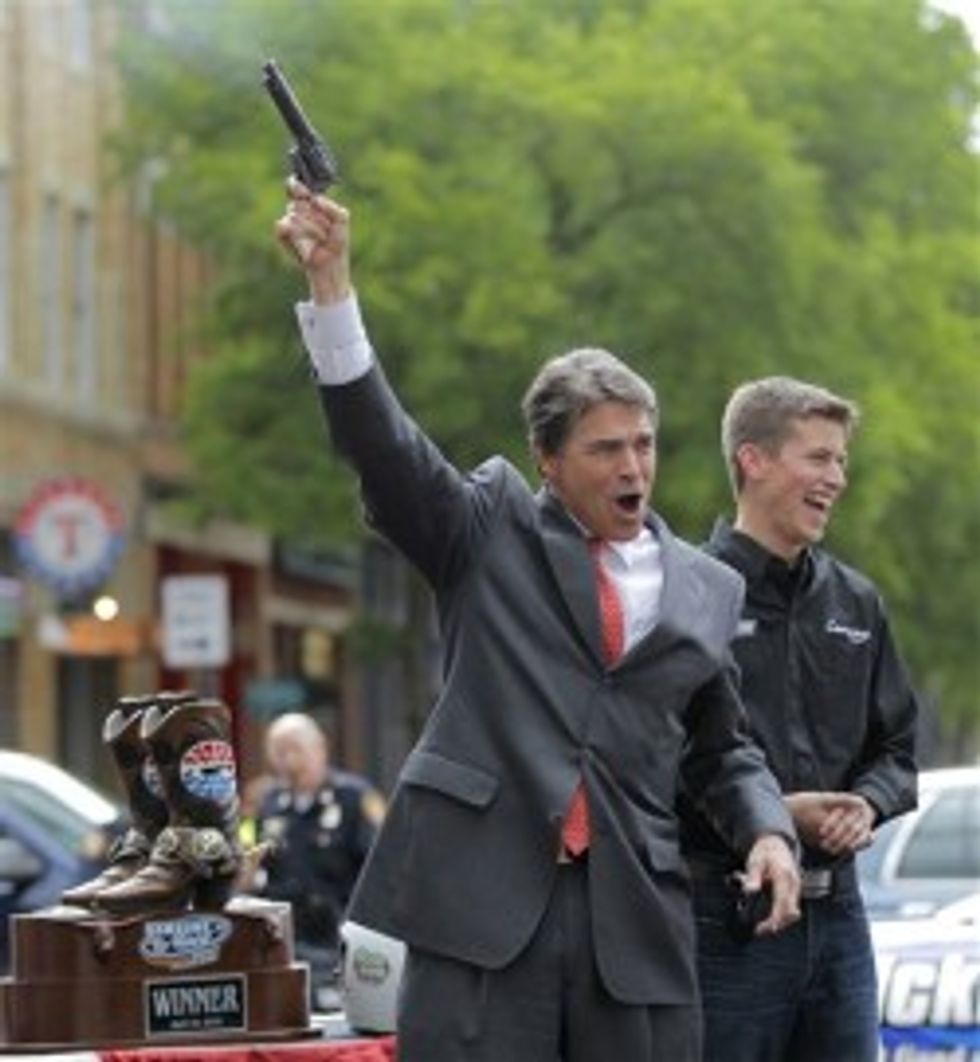 Oh hell yes. Coyote-shootin', painkiller-gobblin', can't remember three things in a row master debater with the super awesome hair Governor from Texas Rick Perry emerged from his closet today to beg for Obamacare money because of how much he hates Obamacare money. But, hey man, a hundred million dollars is a hundred million dollars and Rickwants it for his state and we are sure someone he knows is probably going to profit from it somehow.

Perry health aides are negotiating with the Obama administration on the terms of an optional Obamacare program that would allow Texas to claim stepped-up Medicaid funding for the care of people with disabilities.

Maybe some of these negotiations will include things like, we'd love to help your people, but how's about you stop being such a dick about a program that you are trying to suck money out of, eh Governor? Or, hey Rick, you can have this money if we can literally shove some of it down your throat until you can't say stupid shit about healthcare programs when your state has the highest percentage of uninsured people in the entire fucking country? Hahaha, just kidding, that will never happen.

It doesn't sound like Rick Perry can even hear himself talking:

Long before Obamacare was forced on the American people, Texas was implementing policies to provide those with intellectual disabilities more community options to enable them to live more independent lives, at a lower cost to taxpayers...

Okay, first of all, they are begging for something that is being forced on them? No wonder these people are so terrible on rape issues. And it is obvious that Texas loves to give folks with intellectual disabilities "options" -- their governor's mansion has served as a state home for some of the dumbest assholes ever since 1994.

The Texas Health and Human Services Commission will continue to move forward with these policies because they are right for our citizens and our state, regardless of whatever funding schemes may be found in Obamacare.

LOLWUT? No matter how scammy it is, we want us some, cause MOM WE HATE YOU AND YOUR DIRTY MONEY NOW GIVE US SOME MONEY!!! Even Wesley Warren Jr., the Las Vegas resident who spent the last five years toting his 132 pound sack around in a wheelbarrow, should be impressed with the brobdignagian cojones -- that's Tex-Mex for "balls," y'all - on this here ex-Aggie "yell leader." Perry's testicular tonnage must be what balances out his Lilliputian brain.

Before Obamacare, of course, the governor's favorite way to cut the number of uninsured residents was to execute more of them than any other state leader before him.