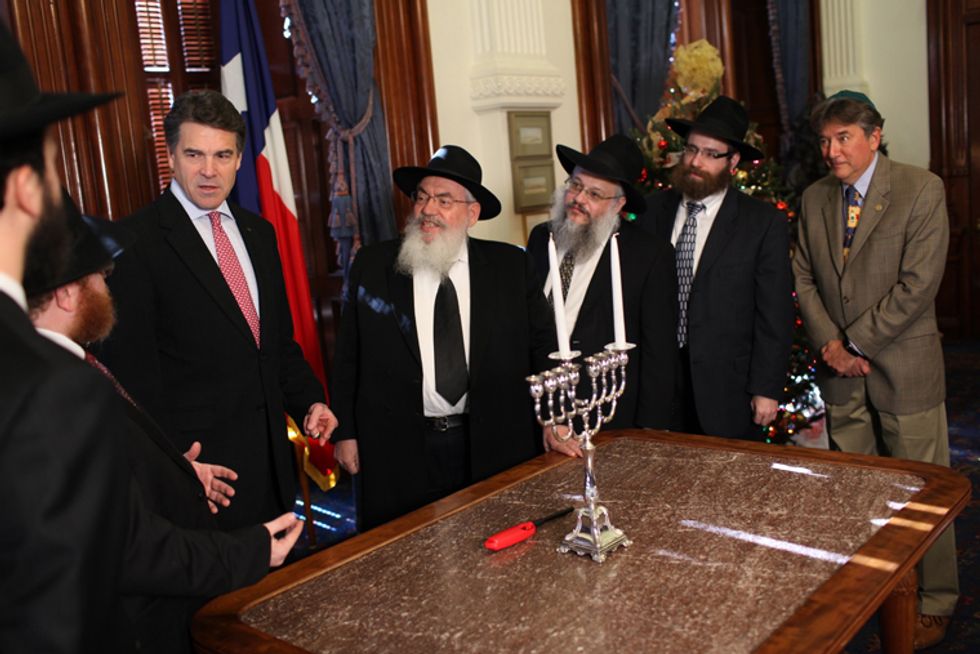 It's the most wonderful time of the year, when Bible-humping politicians who can't wait for baby Jesus to come back and murder all the sinners hope all their Jew friends have a very merry Jewish Christmas. It's an ancient tradition that dates back at least to 2001, when George Dubya Bush -- a big friend of the "Jews" who acceptJesus as their personal savior -- thoughtfully observed, "I couldn't imagine somebody like Osama bin Laden understanding the joy of Hanukkah, or the joy of Christmas, or celebrating peace and hope."

Thanks to Twitter, it's now easier than ever for the very fundamentalists who believe this is a Christian nation, goddamnit, to let their staff remind them to Say A Nice Thing To The Jews when they get their calendar pop-up reminders that it's some kind of day that means some kind of thing to America's Judeo-Christians. And as long as they remember to tweet their pandering sentiments, it also gives them permission the rest of the year to insist that Jesus wrote the First Amendment and supporting Obama means you are A Very Bad Jew. [contextly_sidebar id="RlAoF5dYLhVWbuNw2pwXbDOciAAsRqiv"]

We only just got over having ourselves a HI-larious fit of laughter at a recently discovered letter from Wisconsin Gov. Scott Walker, who was real super excited to recognize "The Eight Days Of Chanukah" -- and yes, those are Walker's Exotic Culture quotation marks. Scott Walker is also a big friend of The Jews and their Jew money, please give him some, he named his son Matthew for you Jew people, you know, and is also totally down to get down with the Chanukah spirit. He even lights a "Chanukah candle" for Christmas.

Let us also not forget Friend of the Jews Rick Santorum, who so loved the Israelites that he gave them his woefully misbegotten Chanukah card in 2012, complete with a New Testament Jesus quote to make everyone happy:

And now it's time for Rick Perry to wade into the Festival of Lights with this patriotic ecumenical delight, his official message for Jewish Christmas, which he wrote by himself with a little help from his English-to-Pandering dictionary:

It is fitting that the first night of Chanukah falls this year on the anniversary of the Boston Tea Party. The same spirit of freedom that inspired the Maccabees to rise up against a foreign empire motivated our Founding Fathers to rebel against the Crown on that fateful night.

“They knew, as the Jewish people know, that the few can overcome the many, that right can defeat might, that faith can transcend persecution. No matter how vast the darkness, all it takes is one candle to spread the light.

Yeah, the Boston Tea party was all about preserving a theocratic rule and protecting it from the imposition of Greek religious practices. Or maybe it's that the Maccabees were just sick and tired of the East India Company's monopoly on the tea trade. Might have been both! We're pretty sure we read that somewhere, maybe in a Rush Limbaugh history book.

Our Republic, like the light of the ancient Menorah, has lasted longer than anyone could have predicted. America remains a beacon of hope in difficult times for the world. And Chanukah reminds us of the power of faith to sustain a nation and ensure the security of our ally, Israel.

Yes, and the dreidel reminds him of how he got really dizzy at this one A&M Christmas party and could barely stand up, after which he tossed all his raisins and nuts.

In any case, as is traditional on this blessed holiday, Rick Perry, the Simple Child, will now ask the Four questions, and if he can actually remember at least three of them, it will have been sufficient. Dyaneu.

And that's the real meaning of Jewish Christmas, Charlie Brown.

[NYT / Office of the Governor]