Rick Perry's Day Full Of 'No' 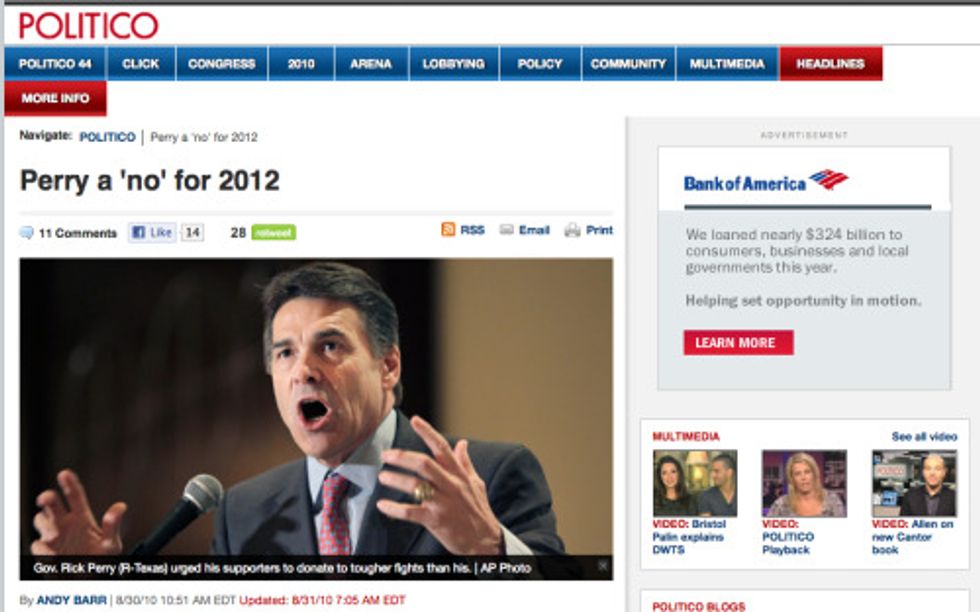 Governor Rick Perry of the Sovereign Nation of Texas wanted to meet with Barack Obama today, because like many of us he thinks the Prez is smokin' hot and also he wanted to discuss beefing up security on our porous-border. But our Commander-in-Crushworthiness, who is visiting Ft. Bliss, has snubbed the old queen, says Fox News. Maybe it was something Perry said, in that letter he wrote.

Perry was one of the first people the president saw when he stepped from Air Force One during an Austin visit on Aug. 9. On that occasion, Perry hand-delivered a letter to Obama adviser Valerie Jarrett, warning about the "dire threat" from drug violence along the U.S.-Mexico border.

What Fox doesn't mention is that Perry's letter also discussed going tubing down the Guadalupe River with Obama, heading back to Austin for a nice evening candlelight dinner and then "we'll see where it leads." It must not have gone over too well! Don't expect Perry and Obama to get gay-married anytime soon.

Speaking of gay marriage, Perry recently visited a barbecue restaurant to inform fellow diners that you can either have gay marriage or jobs, but you can't have both:

"There is still a land of opportunity, friends — it's called Texas," Perry said. "We're creating more jobs than any other state in the nation. ... Would you rather live in a state like this, or in a state where a man can marry a man?"

Why doesn't Perry run for governor of America in 2012, so we could all have jobs? Because he does not want to leave his country, reports Politico, which used this photo to go along with their morning-winning news item:

So let's break it down: Obama snubs Perry, Perry and his jobs snub America, and nobody falls in love or lives happily ever after -- though Texans remain hard at work, at their (prison) jobs. [Fox News/Texas Tribune/reports The Politico]