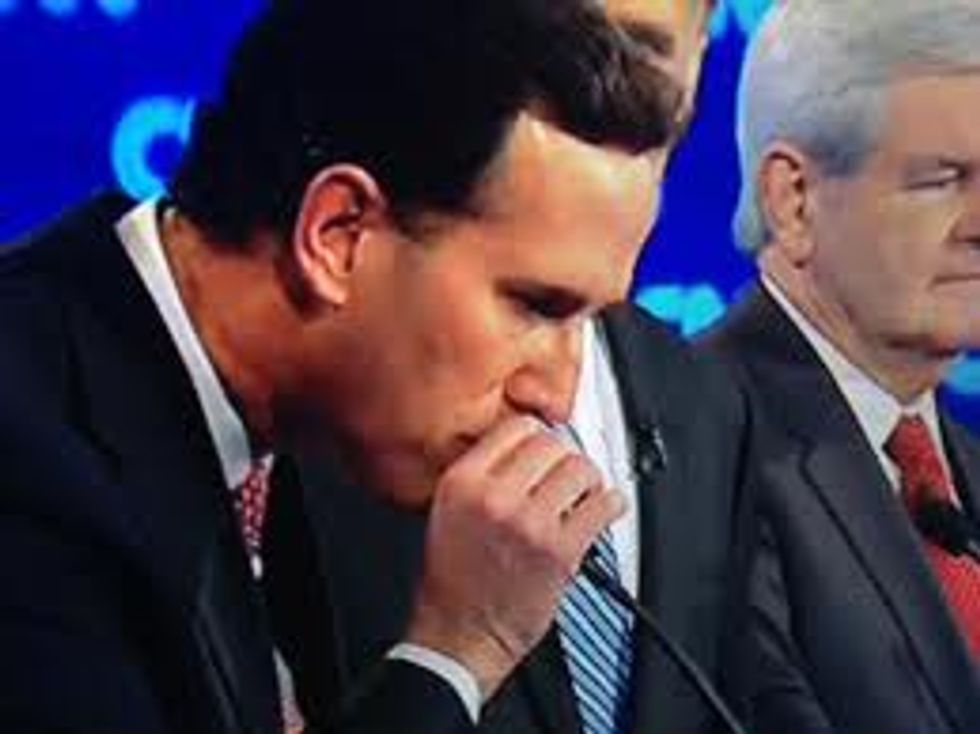 Rick Santorum wiped the smegma from the corner of his lips. (He didn't get it all though, the crusty dried part was still there, but it would flake off eventually.) What was he going to do with himself, now that he, like Mitt Romney, was asad loser whom nobody wanted around? Even his wife, Sheila or something, just kept looking at him and then walking out of the room. He usually found her leaned up against the washing machine. Sometimes she was crying. The children sat quietly, as they always did. He and Sheila or whatever had raised them right. They did not run around like hellions. They didn't waste their brains on the boob tube. They just sat, in the darkened parlor, blinking their little rabbit eyes away from the few rays of filtered light. Rick Santorum needed to do something besides drink beer all morning; he could feel his body becoming a sluggish thing separate from his increasingly paranoid brain. Rick Santorum needed a job.

Rick Santorum put his resume up on JobMonster. It said "Senator, Dad, Husband to Sheila maybe." The only emails he got in return were from some people who had a lot of exciting franchise opportunities, and they were looking for exciting candidates like him! Did he have $25,000 for a investment? He did have $25,000 for a investment, but he did not want to be a franchisee.

He wanted to do what he had always done: have a grand platform for explaining to his fellow man and their respective sheilas that birth control is murder and something about homosexuality, who could even remember. This JobMonster thing was not working out. He sat down, and then quickly unstuck himself from the plastic slipcover on his brown plaid couch, and started working his rotary phone.

He called Tucker Carlson at the Daily Caller. He called Ghost Andrew Breitbart. But they both said they were on Mullholland and pretended their phones cut out (even though he called their landlines). They did not need a new writer who would not even have the guts and decency to stand behind saying outrageously horrible things about black people.

He heard his wife (Sharon?) whispering in the hall. She was on the phone, even though she knew how he felt about that. She was talking to Jerome Corsi at WND. He came up behind her, stealthy, stealthy and jammed his index finger down on the thing that you press to make the phone hang up. He leered, but she did not scream. Oh well. She stuttered something. He didn't listen. A few minutes later the phone rang, and Corsi himself was on the line.

He had a great opportunity for Rick Santorum. He wanted to provide him the kind of august platform he'd had before. The great Santorum name would bring even more honor to WND. He would give him whatever he wanted if he would just say yes to penning a weekly column, in its rightful place next to the Birther stuff and the Obama gay married Islam investigations and this one masterpiece about how we should execute journalists to save the First Amendment. On this rock, Corsi said, they would build their church.

Rick Santorum loved having his ego stroked, he loved it so much! Finally, he said yes. He also said yes to the $25,000 investment Corsi asked him to make. He stopped wondering if Jerome Corsi was fucking his wife, Susan.

By the way, Jerome Corsi totally was.