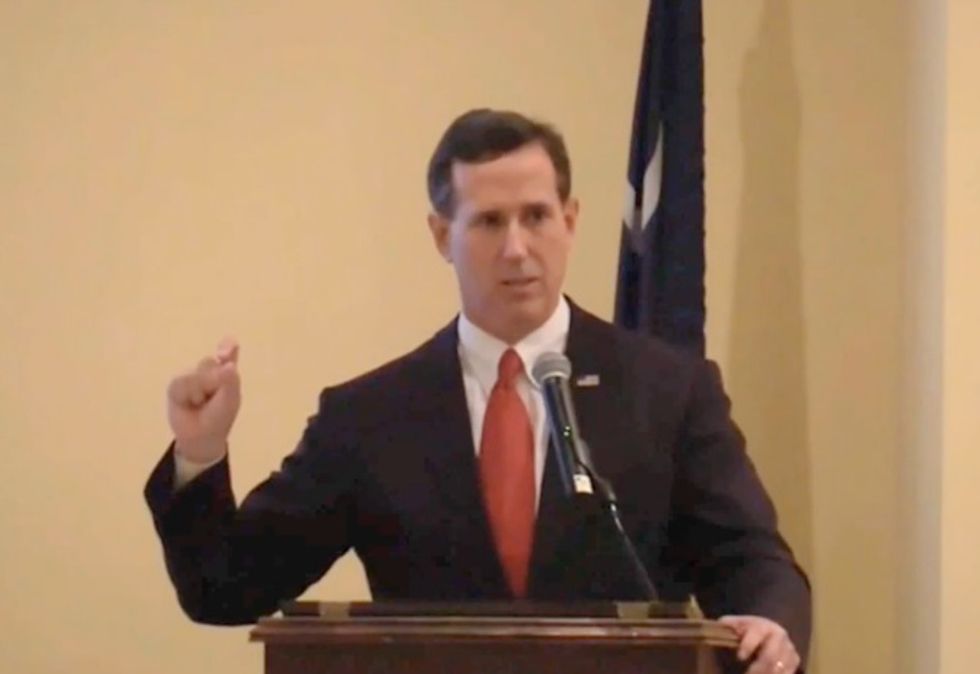 Rick Santorum took a few questions from the audience at last weekend's South Carolina National Security Action Summit, an annual Gathering Of The Wingaloos sponsored by conspiracy theorist, rightwing hack, and Islam-panicked freak Frank Gaffney. So it's not too surprising that Santorum got this long "question" from a nice lady named "Virginia." She started by explaining John Boehner's secret deal with Obama to let illegal aliens into the country, and eventually built to a beautiful crescendo of Pure Weird:

The American people put Republicans back in office in the House and the Senate, and the two things we asked y'all to do were to shut down Obama's executive amnesty and to shut down Obamacare. And you let us down on both issues. Why is the Congress rolling over and [suddenly her voice goes to eleven here] letting this COMMUNIST DICTATOR DESTROY MY COUNTRY? You all know what he is, and I know what he is. I want him out of the White House. He's not a citizen. He could have been removed a long time ago.

She's certainly done her research! She knows that Larry Klayman (and Joe Arpaio) got a judge to hear their lawsuit against "executive amnesty" -- but instead of finding it illegal, the judge laughed the case out of court, which Virginia conveniently left out. But everything Obama does is illegal anyway, and Congress just goes along with it!

Virginia really wants to know how we're going to Save America, and she isn't at all pleased with the answers she's getting:

Ted [Cruz, we guess, or maybe the foulmouthed CGI teddy bear voiced by Seth McFarlane] told me I've got to wait now until the next election, but I don't think the country will be around til the next election! Obama tried to blow up a nuke in Charleston a few months ago, and the three Admirals and Generals. He has totally destroyed our military. He has fired all the Generals and all the Admirals that said they wouldn't fire on the American people if they ask 'em to do so if he wanted to take the guns away from 'em.

It's nice to know that she follows the news so closely and knows all about how Obama has been trying to kill us all and take away our guns.

Before she was asked to step away from the mic, Virginia got a few more parts of her "question" in:

This man is a COMMUNIST DICTATOR! We need him out of that White House now! And the Congress of the United States is the only one — we've lost our Congress. We've lost our executive...

Did we mention that Virginia introduced herself as a retired schoolteacher? Just imagine all the young minds whose worldviews she helped to shape.

Santorum said some words about Obama exceeding his authority and none of this is Santorum's fault since he's not in Congress, but if he were, he'd never stand for such tyranny. It's a pretty good sidestep, deftly ignoring the craziest parts of a crazy person's question so he can agree with her that Barack Obama is in fact a tyrant. After all, why would he want to alienate the base?

And thank you for your service to America, Virginia.