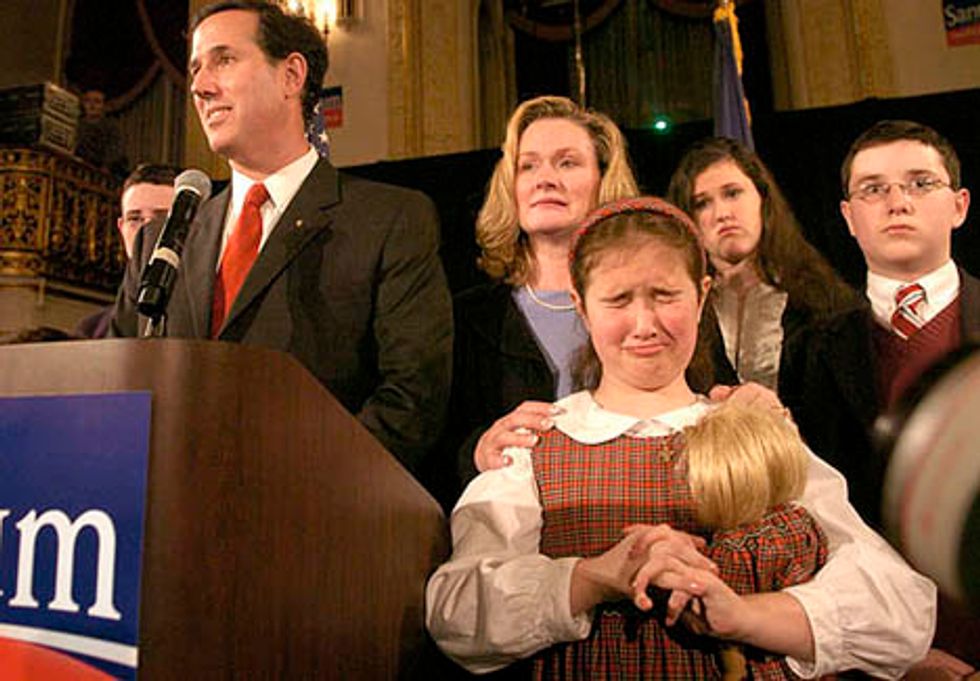 Can we establish something, dear Wonketteers? Can we all agree that the Pope really gets off on just straight-up trolling old prudes?

It was just last week that Francis admitted that fracking is just the worst to the stunned silence of the pro-flaming-tap-water brigade, and it was only a few days ago that Il Papa made the salient point that Catholics don't need to breed like rabbits because Jesus Christ, people, it is not the Irish famine.

Yet it was not long after Rick Santorum heard those last few words from the Pontiff that he lowered what must have been his sixth coffee cup of the day, gazed languidly around his most likely naked-Barbie-and-random-LEGO-brick-strewn house, and realized that the Pope's advice came about seven kids too fucking late. He whispered an inaudible "Shit" under his breath, and knew something had to be done.

Ricky made his feelings known on his Tuesday appearance on the radio show of one Hugh Hewitt, which is the kind of name you give a child when Erick Erickson is already taken. Unfortunately, as a God-fearing Papist, Ricky could not outright tell the Pope he was wrong without undoing some sort of ancient Chinese prophecy or something, so all he could do was express that most Catholic of emotions: disappointment.

"Sometimes [it's] very difficult to listen to the Pope and some of the things he says off the cuff, and this is one of them," Santorum, a professed Catholic, said.

"It's very difficult" is one of those tepid phrases of disapproval that you'll often hear Japanese businessmen use when they're too polite to say your proposal is a load of donkey bunk. Santorum went on:

But when [the Pope] speaks in interviews, he’s giving his own opinions, which I certainly will listen to, but from my perspective, that doesn’t reflect the idea that people shouldn’t [sic] be fruitful and multiply, and that people should be open to life as something that is a core value of the faith and of the Catholic Church

Basically Santorum belongs to that old school boning-should-be-constant wing of the church, and we can only imagine that when Francis overhears the whinging coming from the more paleolithic of his flock that he secretly cracks a cheeky grin and cackles all the way down the corridors. It sustains him. It pleases him.

Now before we go praising the Pope for getting Ricky's knickers in a twist, let's not forget that in those same off-the-cuff remarks he sharply criticized foreign nations insisting on birth control as part of a comprehensive public health package. The Pope referred to it as "ideological colonization," completely ignoring the rather blatant colonization of demanding abstinence be the only allowed method of birth control for almost half a continent. And while we're at it, abstinence didn't work out too well for Mary, now did it?

The Pope's insistence on playing the populist reformer and conservative ideologue at the same time is really only serving to isolate him from both the bitter old prude and the hippie dippie Jesusy wings of his church. He already became beloved by the anarcho-commie scum of the world by ticking off all the right people, but now that folks are hearing more of this old fashioned Catholic condemnation one can't help but wonder if that popular support is going to evaporate in due time. Minority Leader Nancy Pelosi, perhaps detecting this looming vacuum of Papal Potency, has decided now is the time to seize the throne herself, by declaring that she is more powerful than even the Pope ... at making babies.

On Thursday, Pelosi relayed a charming little vignette in which a Republican member of Congress faced off against her on an abortion fight early in her career. The Republican accused Pelosi of thinking she knew more about having babies than the Pope, and in a move we speculate must have been prefaced by popping the collar on her leather jacket and putting her cigarette out on some punk's arm, Pelosi looked him straight on and said, "Yeah. Yeah, that would be true." Then she banged the jukebox with her uterus and abortion was legalized everywhere, forever.

We end our tale by wishing good luck to Pope Francis. He is off getting his jollies by driving the wingnuts crazy(er) and your Wonkette fully supports his endeavors to give them all aneurysms. But don't forget to watch your back, Frankie. Nancy is coming for you, and she knows more than you do -- in fact, she knows everything. Rick's tears may sustain you for now, but can they save you from what's to come?