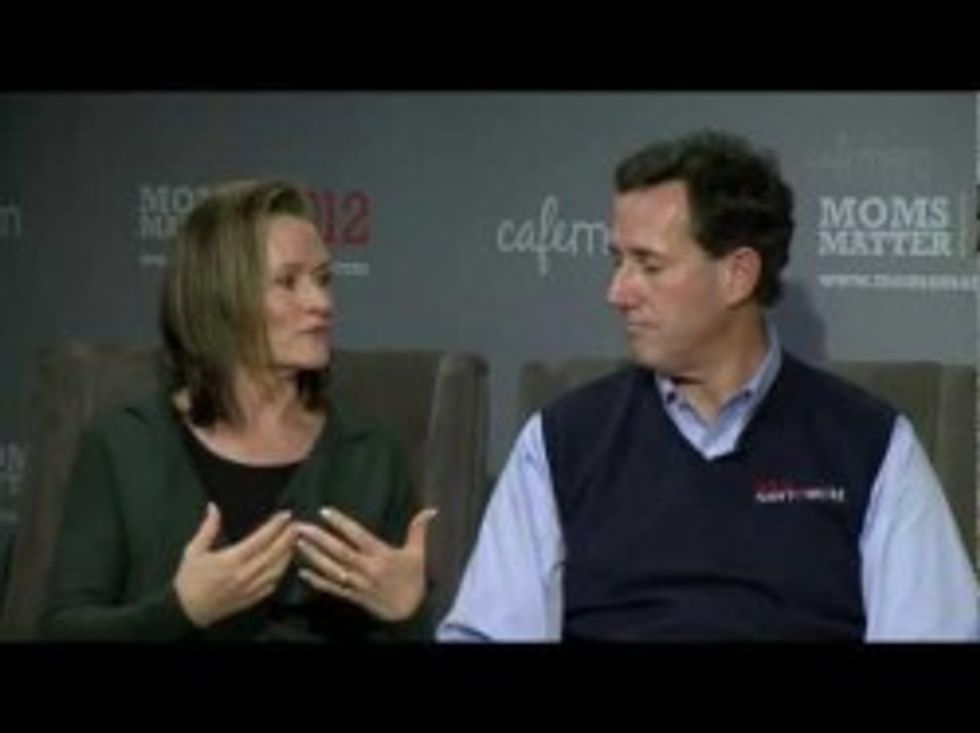 Sinking political tabloid Newsweek has got a HOT SCOOP on a story that, as usual, broke several years ago, which in this case stars the twentysomething sexytimes of one Karen Santorum née Garver before she met hubby Rick Santorum, all the way back when she was just a wily young nursing student who appeared at the door of a dashing but much older doctor in the middle of one night begging to bet let in for, ahem, fear of the dark. And, uh, then the nursing student wanted to stay over. See, droll soft core porno fantasies really do come true! Anyway, BORING, how about a more imaginative plot twist? Oh right, the doctor was an abortionist, and Karen Garver not only stayed the night but also the next six years with urbane liberal obstetrician Tom Allen before deciding she wanted to date rigid nut Rick Santorum instead. And still only THEN do we get to the really hilarious part: Garver explained to Allen after they broke up that he would probably even like her new boyfriend, because Santorum "was pro-choice and a humanist." What?

Here's the very weird detail from the 2005 Philadelphia City Paperstory:

"When [Karen Garver] moved out to go be with Rick, she told me I'd like him, that he was pro-choice and a humanist," said Allen, an elderly but vibrant man, during a brief conversation on the porch of his Pittsburgh row home. "But I don't think there's a humanist bone in that man's body."

Look out, Rick Santorum! QUICK say something super off-the-reservation crazy in case the other wingnuts are planning to take away your nutjob credentials over the new-old revelation that you may have accidentally given someone the impression of being semi-normal at some point twenty years ago. (Give it thirty seconds, don't worry.) [Newsweek/Philadelphia City Paper]