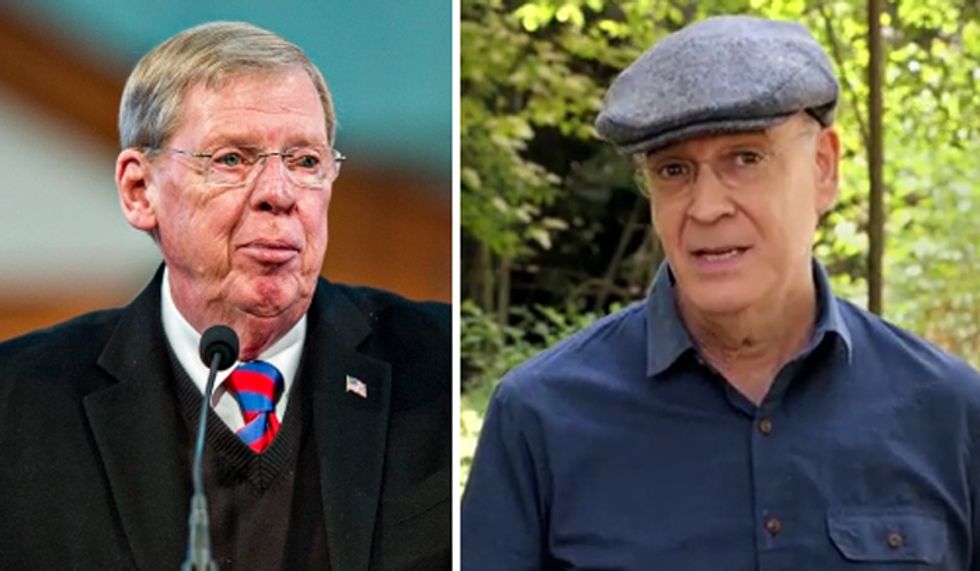 You have to admit it's a nice hat

The fine state of Georgia has its state primary election coming up Tuesday, May 24, so we figure that's as good a reason as any to look at the Senate contenders from the Peach State. The consensus of the political experts out there is that incumbent Republican Johnny Isakson is a safe bet to hold on to his seat, but as we keep saying every week, with Donald Trump at the top of the Republican ticket, a lot of Democrats are feeling ambitious and maybe even lucky. So let's take a look at what's brewing in the state that gave us Jimmy Carter, the Allman Brothers, and The Walking Dead (sorry, Georgia, Sheriff Rick Grimes is not on the ballot).

First off there's incumbent Johnny Isakson, a Republican who first made it to Congress when he won a special election for the House seat that Newt Gingrich resigned in disgrace in 1999. Isakson was elected to the Senate in 2004 (Fun fact: He beat Herman Cain in the primary!) and is seeking a third term. A search of the Wonkette Archives doesn't turn up too terribly much about him to laugh at, darn him. In 2007, he was the only member of a Senate Foreign Relations panel who was sympathetic to Condoleezza Rice when she testified in favor of the Iraq troop surge, at least until after it "worked," and everyone agreed it had been a brilliant idea from the start. Even then, he expressed his support rather strangely, urging the Iraqis to take a lesson from "Kenny Rogers’ old song, ‘You got to know when to hold ’em and know when to fold ’em.’ It’s time for them to deliver on the hand that they’ve dealt." He also co-sponsored an important bill to declare July 2007 "National Watermelon Month." Isakson was a rare voice of Republican sanity while the Affordable Care Act was being drafted, reassuring America in 2009 that it didn't actually include "death panels." He even explained that paying for "end of life planning" was a good thing, since terminally ill patients run up the highest costs and having an advance directive in place gives the individual more control over their care. Astonishingly, Isakson was not nuked by the Tea Party in 2010 for such heresy; he has since seen the light and has voted to repeal Obamacare.

Isakson is a reliable conservative vote on most issues; he voted for the Patriot Act, but didn't really recall ever being briefed on the NSA's phone surveillance program. Did we have one of those? In general, he seems to have drifted rightward with his party: in 2007, he called for increased use of nuclear energy to reduce carbon emissions. By 2015 he was unwilling to say humans are causing climate change, and protested on the floor of the Senate, "I don’t believe climate change is a religion,"* claiming (incorrectly) "there’s mixed scientific evidence" on whether atmospheric carbon contributes to global warming. He's voted to defund Planned Parenthood and has an "A" rating from the NRA. So pretty much your bog-standard conservative, though not one who tends to be a loudmouthed flaming asshole about it, which in 2016 may make him a "moderate."

* Correction: No idea how that stray "not" got in there. What Isakson said was actually "I don’t believe climate change is a religion,” and Wonkette regrets the error. Not to mention the unintended double negative. Or Not.

Isakson was falsely accused by the online assholes of Anonymous of having been a member of the KKK, an assertion for which no evidence was ever presented, so there's one more reason to hate the interwebs. In June of 2015 Isakson announced he'd been diagnosed with Parkinson's disease, but said it wouldn't interfere with his ability to serve out a full third term if reelected. Nonetheless, one of his two fringy Republican opponents in Tuesday's primary, Derrick Grayson, tried to raise funds with a mailer suggesting Isakson was in cahoots with Georgia Gov. Nathan Deal, and would step down after being reelected, allowing Deal to appoint a replacement. Grayson was apparently trying to capitalize on ultraconservative distaste for Deal, who isn't barking-at-the-moon rightwing enough; instead, Grayson got condemned for trying to fundraise off Isakson's illness. Some things are still in bad taste, even in 2016! Isakson is also opposed by Mary Kay Bacallao, who doesn't seem to think the Supreme Court has the power to interpret the Constitution.

On the Democratic side, the frontrunner for the nomination is investment manager Jim Barksdale, who was recruited by state Democrats after other more well-known prospects decided not to run. Barksdale is a political newbie, a 63-year-old who's loaned his own campaign $1 million to get started. Must be nice, although unlike some other candidates this year, he's not portraying his wealth as a measure of his worthiness for office, telling the Atlanta Journal-Constitution,

“I’ve got a great life. It’s a very privileged life. I couldn’t have imagined that things would have worked out so well for me,” he said. “It’s very hard for me to enjoy all that I have when I look at the world and I see so much that is not right and see people that are hurting.”

Barksdale supports Medicaid expansion under the ACA, arguing it's necessary to prevent the closure of rural Georgia hospitals, and also supports a hike in the minimum wage. (Proof he's a red-state Democrat, though: he's not saying yet how much it should be increased. Must tread carefully.) He's very much opposed to the anti-gay "religious liberty" law that passed the Georgia legislature but was vetoed by Gov. Deal, saying he's against "anything that leads to discrimination." He wants the Senate to get off its butt and confirm Merrick Garland, and also supports allowing students to get lower interest rates on loans. All generally nice Democratty stuff, though at this stage of the campaign maybe a bit short on specifics. He's playing up his outsider credentials and Democratic frustration with congressional inertia under the Republicans. And in a savvy bit of branding, his first two campaign commercials have tried to play off a certain liberal-nerd cred, for which he may need to pay royalties to Bernie Sanders:

He seems genuinely nice, which probably means he'll get creamed. The hat thing feels like a clever bit of branding -- donate $100 to his campaign and he'll send you your own hat, "Proudly union made in the USA" -- as long as he follows it up with some substance.

There are two other Democrats in the primary; neither of them has held office previously either. Cheryl Copeland is a "life-long Christian, mother, a widow, AT&T corporate manager and a champion of the underdog," according to her website. Copeland's trying to make hay of the fact that in their first debate, Barksdale said he used to vote Republican; on her website, she says, "Jim Barksdale admitted that he was a republican and has changed his party affiliation to democrat ... Georgia don't be fooled." That strikes us as a bit unfair, given that Barksdale said he'd left the GOP because he felt its policies harmed people:

The key message is that the trickle-down economics that we were sold to and that I bought into for the many years that I voted Republican has not worked, and as Cheryl (Copeland) said, it’s left too many people behind,”

Also, considering Barksdale was sought out by the Dems, it seems unlikely he's a stealth Republican. The other contender is John Coyne, a businessman who was so put out by Barksdale's candidacy that he sued the Georgia Democratic Party, claiming they defrauded him by accepting his $5,220 qualifying fee and then going ahead and recruiting another candidate. That seems ... odd. As does the text of his complaint, which seems awfully dependent on quoting newspaper articles to claim the fix is in.

Barksdale appears to be the favorite for Tuesday, although we haven't found any polling on the race; after the primary, it will be a huge challenge to actually unseat Sen. Isakson, although we'd note the "Election Projection" website has some sort-of good news for Mr. Barksdale: they recently changed their rating of the Georgia Senate race from "Solid GOP Hold" to a mere "Strong GOP Hold." And who knows? That could change again if Donald Trump says some sufficiently crazy stuff between now and November.

Want to throw some pfennigs in Jim Barksdale's hat, or get your own for five Tubmans? His fundraising page is here. Cheryl Copeland's donation site is here, and John Coyne's is here. And if you want to help Yr Wonkette's continuing mission to count down all the Senate races this year, we'd encourage you to drop some money in our kinky leather kitten headgear, too (whip sold separately).