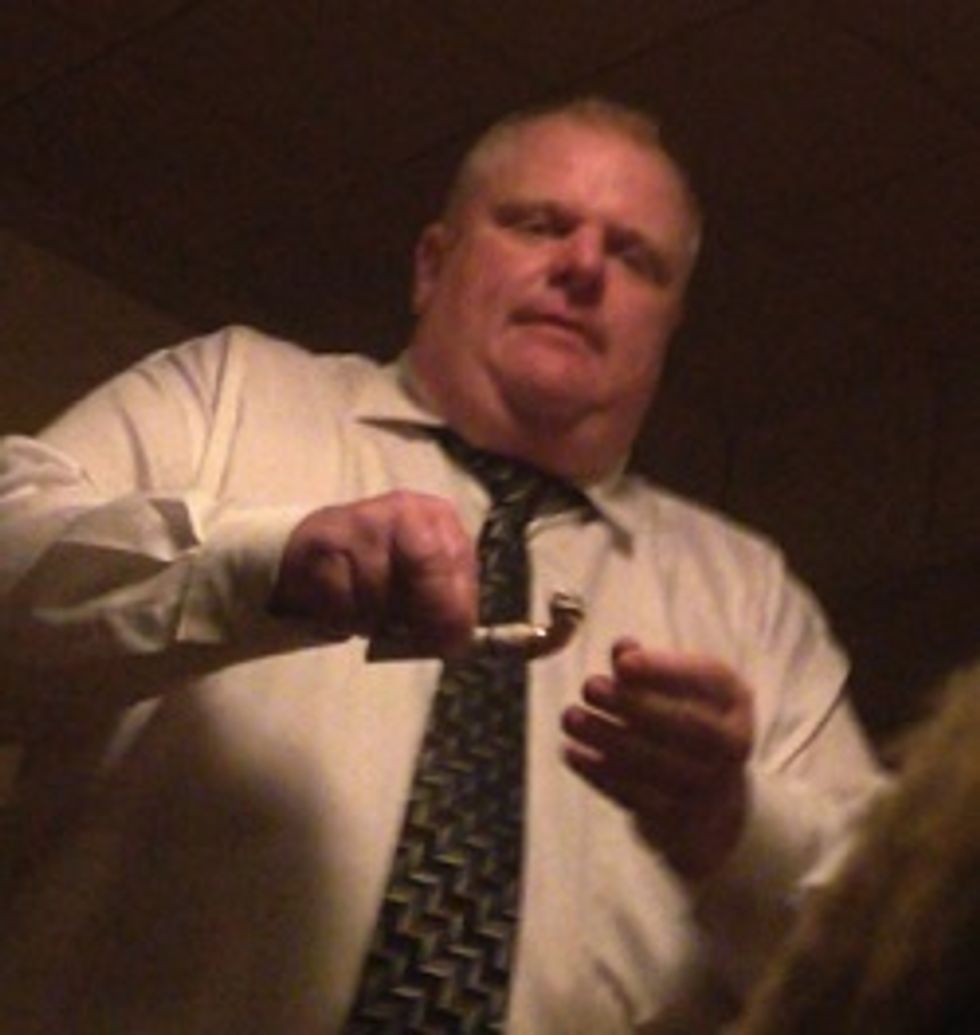 This took long enough. Majestic hoser Rob Ford, mayor of Toronto and the greatest reality TV star the world has ever known, announced last night he would take a leave of absence from his job of embarrassing himself and his nation in public in order to enter rehab for substance abuse. Quitter.

What finally motivated the lovable walking myocardial infarction to throw in the towel on his fun-loving good times? Ford, who is in the middle of running for re-election, told a columnist for the Toronto Sun that he’s “ready to take a break” from his campaign and “go get help.” Sure, a nice break! He’s exhausted from partying his way across the North American continent and now he just needs a few days off to get his head straight, recharge his batteries, attend some meetings and find a sponsor, and he’ll be good to go.

Also, there are new audio and video tapes of him smoking crack and talking about how much he’d like to bone one of his opponents in the mayoral race.

The Toronto Globe and Mail reportedly has the videos of the crack-smoking, which allegedly occurred this past Saturday at Ford’s sister’s house. Ford’s sister was there, along with his former driver who has been charged in the past with dealing dope and extortion, and the mysterious person who actually shot the video, a drug dealer named Jermaine who has been asking media outlets to pay him six figures for the tape.

At least the mayor is spending time with family. That’s always nice.

The audio recording, covertly taped by a patron of Sullie Gorman’s Monday night, captures the mayor being unruly as he’s ordering booze at the Royal York Rd. bar, complaining about his wife Renata and making lewd comments about mayoral contender Karen Stintz.

Additionally, the audio captured Ford demanding the bartender serve him more shots or “I’ll fucking break your legs” and complaining about being pressured to fly a gay pride flag at Toronto’s City Hall. Dignified! Hope he wasn't counting on the gay vote.

Quite a week Rob Ford has had: caught on video smoking crack on Saturday, caught on audio being a boorish asshole in a bar on Monday, pulling a John McCain and “temporarily suspending” his campaign on Wednesday. Oh yeah, temporarily, because he is not giving up on his re-election. Why would he? It would be cruel of Ford to deny the people of Toronto – nay, the people of the world – his special brand of entertainment.

There is also a report that Justin Bieber recently enraged Ford when the singer asked the mayor if he had any crack when the two met in a Toronto nightclub, but who wouldn't be enraged just by the sight of that annoying little moppet?