Robert Mueller All The Way Up Talking Hemorrhoid Stephen Miller's Butt. That Can't Be Comfy! 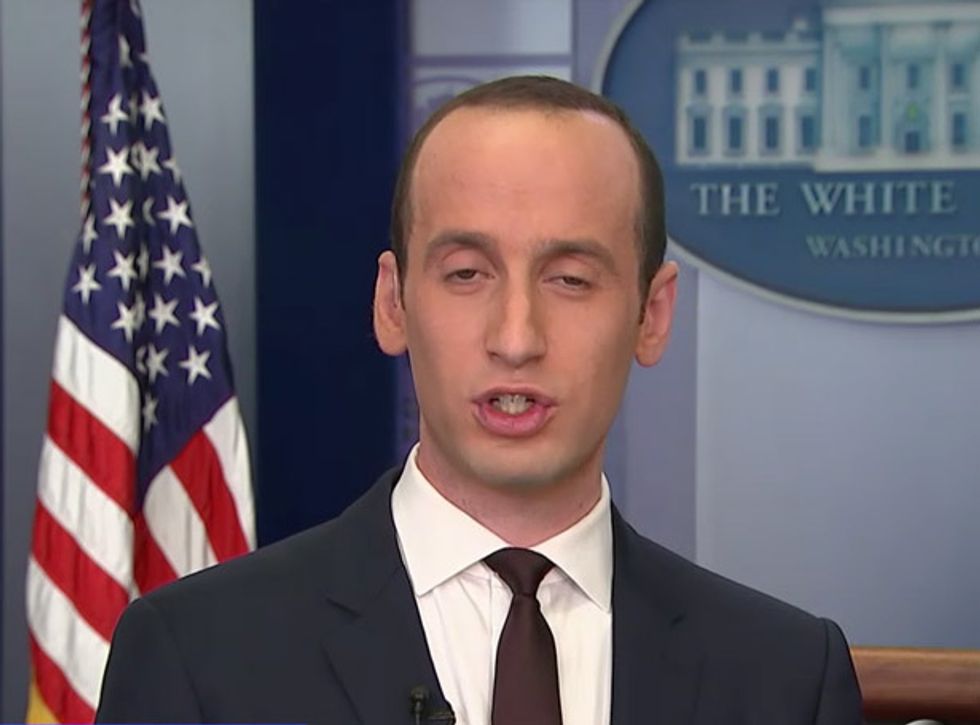 CNN reports that White House Weenus Stephen Miller worked his unique charms on Robert Mueller's legal team recently. Miller is the highest ranking official in Trumpland to be interviewed by the Special Prosecutor's office. And we are sooooooo hoping it was this lady who asked all the questions.

Zainab Ahmad has prosecuted 13 international terrorist suspects for the American government. She hasn’t lost yet: https://t.co/o9QFIR9VJqpic.twitter.com/I8HiyZ5zkj

Miller is the racist little dicksnot who, "jumped, uninvited, into the final stretch of a girls’ track meet, apparently intent on proving his athletic supremacy over the opposite sex." And that was when he was a harmless teenager, not a grown man playing footsie with nazis in the White House briefing room.

Did Trump fire James Comey to kill the Russia investigations? Well the Weenus knows the answer to that question, since he huddled up with Trump and Javanka at the Bedminster garbage compound and wrote the original  You're Fired letter in May. Sure, none of them knew shit about law. Or HR. Or government. BUT THEY HAVE BIG BRAINS! So they used their all the best words to splain why Comey was a bad hombre who had to go.

At this point, we have ceased to be surprised by anything that comes out of the Trump sewer. We're operating on the assumption that the brain trust decided to actually put in writing, I, DONALD TRUMP, AM FIRING YOU, JAMES COMEY, FOR NOT KILLING THE RUSSIA INVESTIGATION INTO MY ADMINISTRATION DESPITE MY REPEATED REQUESTS. WHEN I SAID MICHAEL FLYNN IS A GREAT GUY, I MEANT THAT YOU SHOULD IGNORE ALL HIS NUMEROUS CRIMES. ALSO, TOO PEE HOOKERS! LOCK HER UP! MAGA!

If they had been dumb enough to record their intent to obstruct justice, White House Counsel Don McGahn would have lost his shit when the band of savants got back to DC and shared their masterpiece. He'd have insisted they get some underling to do the dirty work instead. And, bing bong,that's exactly what happened! Weird, huh?

Anyway, lying to the Special Counsel is a crime -- just ask George Papdopoulos. So we hope you didn't make too many fibs about that memo, Weenus. Particularly since Ty Cobb decided executive privilege is for pussies and turned over ALL THE PAPERS to Mueller's team. Safe bet they've had a copy of that original memo for months now.

And speaking of things you shouldn't deny ...

We're not sure which one of these pasty white dudes is the Weenus, or if he was the pasty white dude holding the camera. But he was definitely at the table when Boy Wonder George Papadopoulos talked about arranging a meeting between Putin and Trump. This contradicts Jeff Sessions's Congressional testimony, when he swore that no one in the campaign had sexual relations with that Russian, Mr. Putin. So we're guessing that Mr. Mueller had questions about that meeting, too. Once again, there were at least a dozen people in the room, one of whom has already flipped and pleaded guilty to lying to the FBI. So we hope Lil' Ween didn't make too many fake newses about it when he sat down with the Special Counsel. Because it would be a terrible shame if such a nice young man ended up in legal trouble.

Oh, but we make funny! We hope he got caught telling ALL THE LIES. And then we hope that Mueller throws his whiny little weenus ass in jail forever. There are a lot of punchy-faced assholes in the White House. But this little fascist tumor takes the cake! Godspeed, Mr. Mueller!

Please give us money to cover whatever Friday News Dump is coming our way! Feels like something's coming, right?