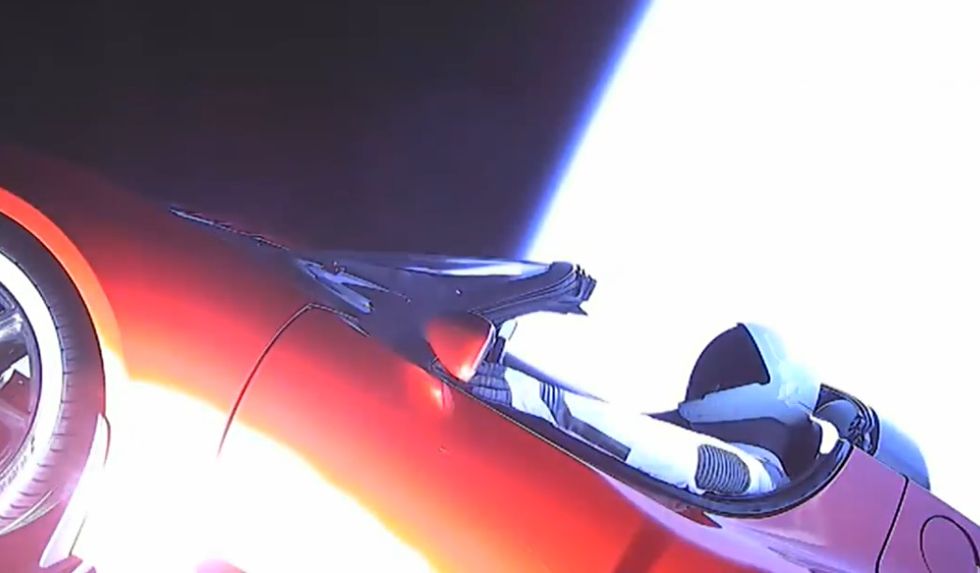 Is there Life On Mars?

Hey, kids, life on Earth is still terrible, don't get us wrong, but HOLY SHIT DID YOU SEE THE ROCKET??!! That would be the launch of SpaceX's Falcon Heavy rocket on its first full-scale test, taking Elon Musk's very own Tesla Roadster and a mannequin in a spacesuit (as far as we know it's a mannequin) out of Earth's orbit, on its way to orbit the sun for the next few hundred million years. Musk had a hell of a lot more than just money and reputation wrapped up in this launch; there was a serious risk that he might have run out of nerdy pop culture references.

You got your spaceman in a convertible from Heavy Metal, your "Life on Mars" playing at the control center when the car was revealed on the video feed (with "DON'T PANIC" in large, friendly letters on the dashboard), and your robot landing barges named after mammoth spaceships from Iain Banks's Culture novels: "Just Read The Instructions" and "Of Course I Still Love You." And then there's the gaming-inspired name for the next generation of heavy lift SpaceX rockets, which the New York Times describes rather primly -- to get people to Mars, Musk will build the

OK, now Dok will stop nerding out for a second and post the video, because ROCKET!!!!!

Your countdown and liftoff are at the 29 minute mark, and from there, you can just enjoy. The simultaneous landings of the two boosters at a bit after 37 minutes is almost too smooth to be believed, and will surely get the Flat Earth people yelling "CGI fake!" They're wrong.

What, you want that Heavy Metal title sequence too? Sure, why not:

AND SpaceX's live feed of the starman in the car? Well heck, we can add that too:

Update: Looks like the livestream has ended; I've replaced it with a replay version

Updated Update: in case you were wondering what the car/payload looks like, there's this:

Floating in a tin can.

The first view of Starman and his dashboard.

Yr Wonkette is supported by donations from nerds like you. Click here to rocket some money to us.