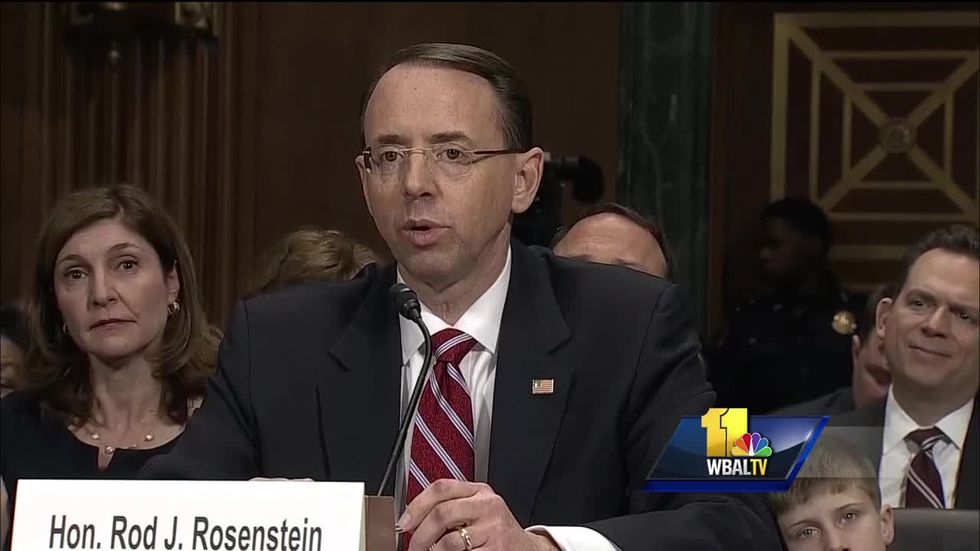 Being a grownup is HARD. Sometimes you have admit that two opposite things are true at once. Case in point: Everything Deputy Attorney General Rod Rosenstein said in his Memorandum urging the president to fire James Comey was correct. Comey did behave inappropriately at the July 5 press conference by slagging Hillary Clinton. He was way out of line to announce the investigation into Huma Abedin's emails a week before the election. It was improper for Loretta Lynch to outsource her prosecutorial discretion to the FBI.

AND STILL, Rosenstein allowed himself to be used as a tool to shut down the inquiry into Donald Trump's connections to Russian hacking during the 2016 election.

The only U.S. Attorney appointed by George W. Bush who served eight years under Obama, Rosenstein was well-respected by Republicans and Democrats. He was confirmed as Deputy Attorney General on April 25 by a vote of 94-6. And he lent that credibility to a weak and damaged president who used it for an illegitimate purpose. No reasonable person believes that Trump and Sessions are suddenly FOR SHOCKED at Comey's mistreatment of Hillary Clinton. As reported by the New York Times, they wanted to fire Comey, so they set about crafting a rationale.

Senior White House and Justice Department officials had been working on building a case against Mr. Comey since at least last week, according to administration officials. Mr. Sessions had been charged with coming up with reasons to fire him, the officials said.

The Rosenstein memo is dated...today. So there was no real recommendation from DOJ. Trump wanted to do it, and they created a paper trail.

Rosenstein's memo explains how Comey's inserting himself into the election simply Isn't Done -- but seems to have declined to mention to the president that firing an FBI director Isn't Done either. He writes about how Comey "compounded his error" but doesn't seem to have mentioned to the president that by firing the FBI director, he would be compounding his own. He talks about taking the Department of Justice back to its apolitical "traditions" -- without alerting the president of the very strong "tradition" he'd be breaking in FIRING THE MAN INVESTIGATING HIM.

Rod Rosenstein has just become guilty of everything of which he accused James Comey.

One criticism of Rosenstein's memo is that it contains no legal reasoning or precedent. It merely states a conclusion and backs it up with media quotes from former Attorneys General. Naturally, these guys are coming out of the woodwork to distance themselves from this hatchet job. Former George H. W. Bush AG Donald Ayer told Buzzfeed that Rosenstein, "should realize that his correct assessment of those mistakes is now being used to justify [Comey's] firing for a very different reason." Even Alberto "Torture Memo" Gonzalez is running away from Rosenstein on this one. And that guy knows about flushing an entire career with one, ill-advised memorandum!

Former AG Alberto Gonzales: Comey made some mistakes, but why fire him now? @MorningEdition@nprpic.twitter.com/CS6cqOraN9

It's not like no one saw this coming. In February, Rod Rosenstein's hometown paper published an editorial urging him not to take the job of Deputy Attorney General. Trump had just signed the Sanctuary City Executive Order and the first Muslim Ban -- both of which were blatantly illegal. The Baltimore Sunbegged him not to ruin his reputation by harnessing himself to the dumpster fire in the White House.

And at its core, in this administration, the job would be carrying water for a chain of outsiders who appear to care little about keeping the country's reputation — or indeed the country — intact. Do you really want to link your legacy with theirs? [...]

You might think that you can somehow keep your principles and common sense as the deputy attorney general, but we saw how that turned out for Sally Yates. Despite being pressed in 2015 by Senator Sessions himself during her deputy AG confirmation hearing to "say no" to unlawful presidential directives, the minute she did as the acting AG, refusing to enforce President Trump's ludicrous immigration ban last week, the president canned her.

Tricia Bishop, Contact Reporter for the Baltimore Sun. If she tells you something, LISTEN.

But he took the job. And a mere 14 days after being sworn in, Rosenstein's reputation is in ruins. Whatever he does, for the rest of his career, this Memorandum justifying the firing of James Comey will be what he is remembered for. It's a goddamn shame.

We don't know yet whether Trump will manage to kill the investigation. Mary McCord, the Assistant AG responsible for the Russia inquiry, is also leaving at the end of the week. And Trump spokesman Sarah Huckabee Sanders told Tucker Carlson last night that it was time to wind the investigation down. "‘My gosh, Tucker, when are they gonna let that go?’ It’s been going on for nearly a year. Frankly, it’s kinda getting absurd. There’s nothing there.”

This is all bullshit, of course. But they'll keep repeating it!

Who knows what will happen with the House and Senate investigations being led by Republicans who seem intent on pinning the whole debacle on Susan Rice?

The only way forward, for Rosenstein and for the investigation, is for Rosenstein to appoint an independent prosecutor. Jeff Sessions was forced to recuse himself from the case because of his own ties to Russia, so the power to appoint such a prosecutor rests with Rosenstein. It won't save his reputation -- he'll always be the Robert Bork who abetted Trump in this nakedly corrupt act. But Rosenstein was never a partisan hack before - if he wants to walk out of the White House with a little of his integrity intact, he'll use his power of appointment and stop being manipulated by these crooks.

This Comey thing is giving us a panic attack! Please contribute to the Wonkette fund for Xanax and Cheetos!