Romance Expert Mike Huckabee Has Some Kissing Tips For YOU! 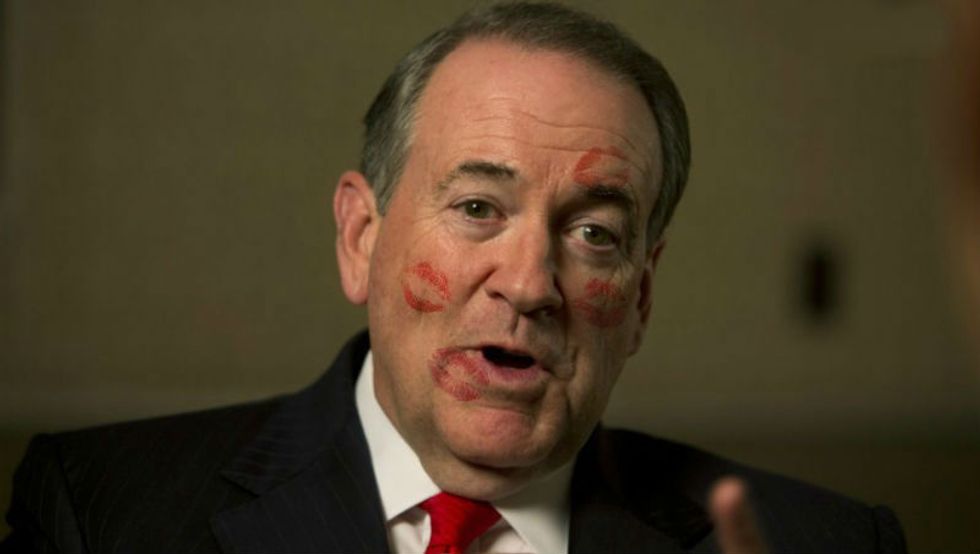 On last night's edition of "The Factor" -- the first to be O'Reilly-free -- Mike Huckabee stopped by to talk to stand-in host Dana Perino about how super unfair everyone in the media is being to Donald Trump.

Horrified, he noted that when Trump tweeted his totally unsubstantiated claim that Obama put a "wiretapp" in Trump Tower, 99.5% of the coverage of that was negative! Amazing! You would think that at least a few news organizations would be able to come up with something nice to say about the conspiracy theory that Trump just pulled out of his ass, but no. Also no one had nothing nice to say about how he handled the Obamacare repeal that did not end up happening.

This, he claims is why "journalism has died in this country." Because obviously if people were doing real journalism, they would say "Oh! How nice it is that Donald Trump is making up weird lies all the time and posting them on Twitter! That is some real good Presidenting he did there!"

Mike Huckabee knows a thing or two about good journalism, for sure. And also KISSING!

"You know there's three things you can't do. You can't spit into the wind, you can't climb a ladder leaning toward you or kiss a woman leaning away from you. Add one more to the list if you're Donald Trump: You can't get a fair shake from the media."

First of all, you totally can kiss a woman leaning away from you. You just have to lean further than you would otherwise. And leaning towards someone is, amazingly enough, not a sure sign that they want you to stick your tongue down their throat. I lean towards people I don't want to make out with all the time.

Second, Donald Trump could totally get a "fair shake" from the media if he didn't constantly lie and do and say things that are terrible. In fact, every single time he does anything that appears to be sort of normal, or gives a speech that is not completely off the rails, he is immediately showered in praise and everyone in the media announces that he's finally "pivoting" towards being "presidential." The bar is very, very low here. If he says something true, does something that is not embarrassing, or uses the right fork at the dinner table, we'll get a full new cycle of how very presidential he is being.

For what it is worth, I do not recall Mike Huckabee or Fox News ever giving a "fair shake" to Obama or anyone on the Left.

It was a rather loaded analogy to choose, of course, considering the fact that Bill O'Reilly got the axe largely as a result of companies choosing not to advertise on "The Factor" following a (new) slew of sexual harassment allegations against him. Not to mention the fact that Trump himself has previously bragged about going around kissing women without asking, among other less family-friendly things.

When men defend the super creepy behavior of other men, it's largely because they fear that their own behavior is similarly creepy. That they have kissed women who did not want to be kissed by them. That they now have to go and reexamine all their past kisses for signs that they were being rejected when they thought they were not. Which, to some, is a positively terrifying thing to do.

If I were you, fellas, I would not go and take any journalism or kissing advice from Mike Huckabee, by whom I am reasonably certain no woman, including his own wife, has ever wanted to be kissed.