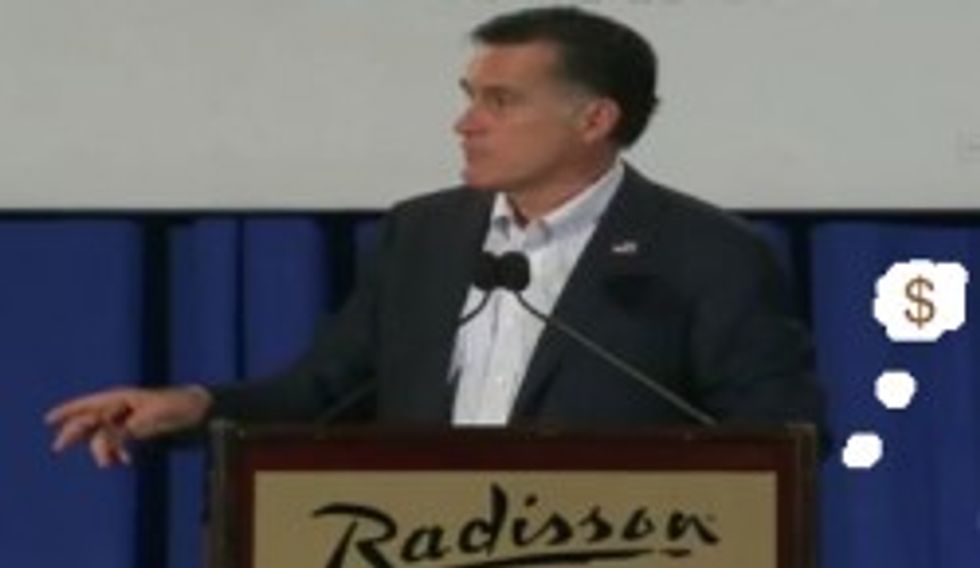 After Mitt Romney's on-the-defensive appearance in Sunday morning's MSNBC/Facebook debate, the frontrunner showed up at the Nashua Chamber of Commerce in Nashua, NH Monday to give an address in which he admitted that he "likes being able to fire people who provide services to me." The context was health care: Romney evidently thought that the word "fire" would be an appropriate term for what Americans could do if they weren't happy about their health care provider. But ummmm, can you go away now, The Man?

Just. Stop. Talking. The awkward comment comes just a day after Romney made a very baloneyesque remark about pink slips at an event in Rochester, NH, as he attempted damage control after Sunday morning erased our knowledge of his careen through Saturday night's ABC debate. Standing before a seated crowd of 30 white people, the candidate leapt into the fire by announcing that he knew first-hand what it was like to worry about losing one's job. That would presumably be gloved hand. The crowd looked psyched! Ann Romney most of all.

I know these are tough times. I've learned what it's like to sign the front of a paycheck, not just the back of a paycheck. And to know how frightening it is to see if you can make payroll at the end of the week. These are experiences that many of you know ... I know what it's like to worry about whether you're going to get fired. There were a couple of times I wondered if I was going to get a pink slip.

What were those times? Hey, shut up! It's none of your business!

A Romney spokesperson said the campaign couldn't pinpoint exactly when or in which job Romney was worried about having to borrow money from his father, but that it probably occurred when he was a young man working his way "up the career ladder.” That his father carved for him with his bare hands.

Perry joined in the criticisms Monday morning at a campaign stop at Mama Penn's restaurant in Anderson, SC, saying:

Now I have no doubt that Mitt Romney was worried about pink slips — whether he was going to have enough of them to hand out because his company Bain Capital with all the jobs that they killed, I’m sure he was worried that he’d run out of pink slips.

Go, cattle rancher or whatever you are, go!

And we'll leave the second-to-last word for an, ahem, Santorum supporter (friends close, enemies closer and all that), who heads up a New Hampshire-based PAC that is supporting the candidate (good luck with that). Said Jerry Delemus:

And the last word: