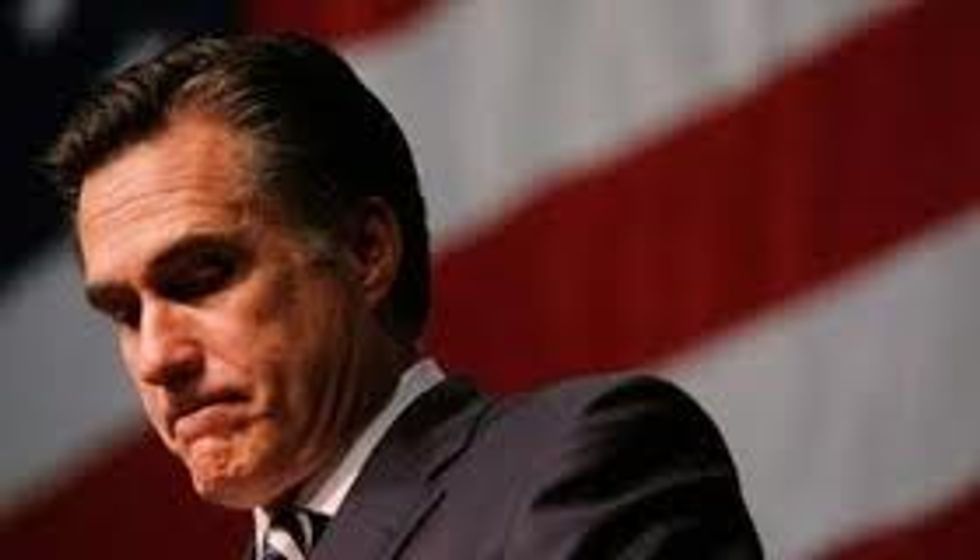 The Romney campaign is so sad, you guys! They know the whole campaign has been one bed-shitting after another, and that their candidate is worse than Newt Gingrich and Herman Cain and Christine O'Donnell combined, because of those three at least one (Christine O'Donnell) does not make it a habit to insult people to their faces. (Terrifying bridge troll Newton does, of course, but Smooth Herm only insults ladies, by grabbing their pudendae when they are asking for jobs.) So the campaign knows this, and now they are all at the"whining to reporters" stage, and the "cussing at reporters" stage (they were there long ago, of course), and the calling the campaign "a vulgar, unprintable phrase" stage. ("Dog-fuck," probably.) Let us read more, our hearts filled with tea and sympathy!

A palpably gloomy and openly frustrated mood has begun to envelop Mr. Romney’s campaign for president. Well practiced in the art of lurching from public relations crisis to public relations crisis, his team seemed to reach its limit as it digested a ubiquitous set of video clips that showed their boss candidly describing nearly half of the country’s population as government-dependent “victims,” and saying that he would “kick the ball down the road” on the biggest foreign policy challenge of the past few decades, the Palestinian-Israeli peace process.

Grim-faced aides acknowledged that it was an unusually dark moment, made worse by the self-inflicted, seemingly avoidable nature of the wound. In low-volume, out-of-the-way conversations, they are now wondering whether victory is still possible and whether they are entering McCain-Palin ticket territory.

No, grim-faced Sads. You are well past McCain-Palin ticket territory; you have entered Reagan/Mondale territory, and despite all appearances, you are not Reagan. Saaad trombone!

Aides did little to hide their annoyance: on Tuesday night, a Romney aide cursed loudly as he tried to corral reporters into an impromptu news conference in Costa Mesa, Calif.

Mr. Romney himself seemed pensive on the early-morning flight Tuesday from California to Utah, sitting alone with a white legal pad and a pen as he picked at a vegetarian breakfast burrito. An aide said that he had eaten dinner alone in his hotel room the night before as the video controversy began to unfold.

There has never been more tragedy in one place than when Mitt Romney dined on a vegetarian burrito alone.

Here, Mitt Romney, we made you a picture, because we are liberals and we are pained by your pain. Feel better soon! Stop fucking the dog!