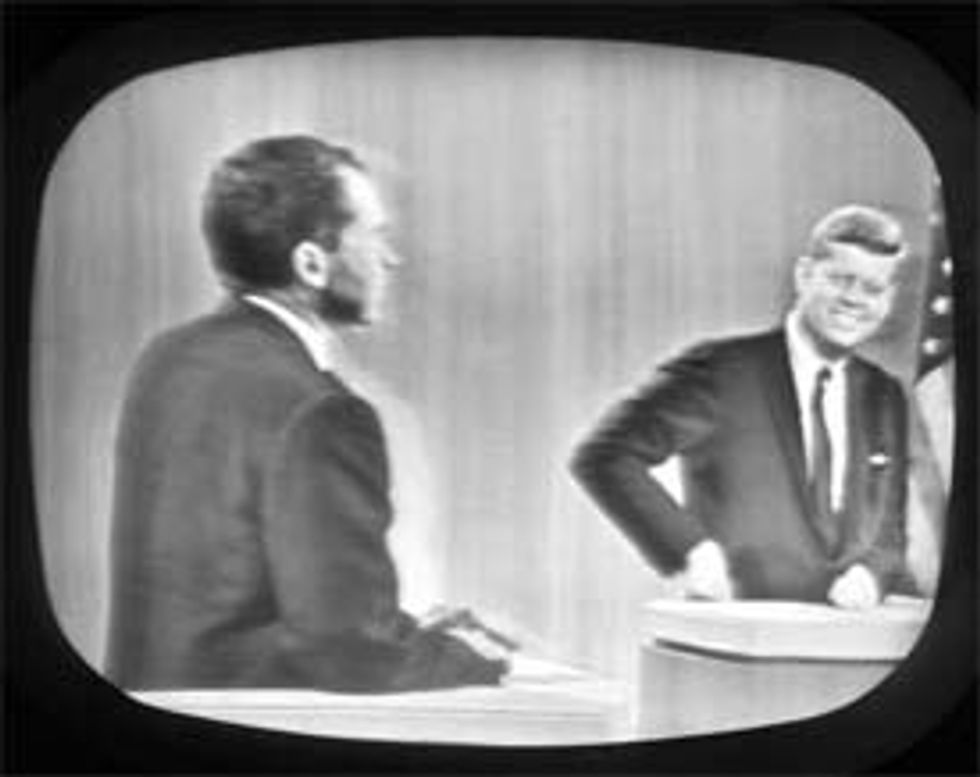 OH BOY OH BOY THE DEBATES ARE COMING! This week will be the first time that Barack Obama and Mitt Romney get on TV and have a thoughtful, earnest exchange about how their different visions will translate into policies to help the great country they both love ha ha we can't even finish this sentence because of course the whole noble debate concept has long been subsumed into the general presidential election horrorshow of spin and fuckery. We're still days away and already the mind games are starting. First up: expectations-lowering, in which each campaign tries to convince the press that their candidate will spend most of the debate gibbering incoherently and urinating on himself in terror, so that when he manages to string several coherent sentences together it can be spun as a win. Unfortunately, Mitt's people's attempts at this have been a little ... too convincing?

So, senior Romney advisor Beth Myers, what email did you send out to "interested parties" last week?

In a matter of days, Governor Romney and President Obama will meet on the presidential debate stage. President Obama is a universally-acclaimed public speaker and has substantial debate experience under his belt. However, the record he's compiled over the last four years -- higher unemployment, lower incomes, rising energy costs, and a national debt spiraling out of control -- means this will be a close election right up to November 6th.

It's kind of sad that even in a piece of transparent spin she can't bring herself to predict a Romney victory. "Guys, this isn't going to be a blowout at all! Probably we'll be within single digits on election day!"

Voters already believe -- by a 25-point margin -- that President Obama is likely to do a better job in these debates. Given President Obama's natural gifts and extensive seasoning under the bright lights of the debate stage, this is unsurprising. President Obama is a uniquely gifted speaker, and is widely regarded as one of the most talented political communicators in modern history. This will be the eighth one-on-one presidential debate of his political career. For Mitt Romney, it will be his first.

This part might have been more convincing had it also at least touched on Romney's robotic, unlikeable stage presence, but we'll let that pass, since widespread knowledge of it is probably built into that 25-point gap. Also, didn't Mitt go through, like, an infinite number of horrifying GOP primary debates, both this year and in 2007-8? I guess barking smugly at Rick Perry and/or Mike Huckabee doesn't count as "real debating."

Four years ago, Barack Obama faced John McCain on the debate stage. According to Gallup, voters judged him the winner of each debate by double-digit margins, and their polling showed he won one debate by an astounding 33-point margin. In the 2008 primary, he faced Hillary Clinton, another formidable opponent -- debating her one-on-one numerous times and coming out ahead. The takeaway? Not only has President Obama gained valuable experience in these debates, he also won them comfortably.

"Obama is become death, debate destroyer of worlds! The debate stage will be reduced to a smoldering crater under the president's withering debate-powers! If Mitt Romney crawls from the rubble with at least two limbs intact, he will have done as well as anyone could expect!"

But what must President Obama overcome? His record. Based on the campaign he's run so far, it's clear that President Obama will use his ample rhetorical gifts and debating experience to one end: attacking Mitt Romney. Since he won't -- and can't -- talk about his record, he'll talk about Mitt Romney. We fully expect a 90-minute attack ad aimed at tearing down his opponent. If President Obama is as negative as we expect, he will have missed an opportunity to let the American people know his vision for the next four years and the policies he'd pursue. That's not an opportunity Mitt Romney will pass up. He will talk about the big choice in this election -- the choice between President Obama's government-centric vision and Mitt Romney's vision for an opportunity society with more jobs, higher take-home pay, a better-educated workforce, and millions of Americans lifted out of poverty into the middle class.

"And we cannot emphasize this enough: When Mitt Romney does this, he will lose. Nobody wants to hear about this crap. Nobody. He will be laughed off the stage, but not before Obama's ninja-like debating prowess reduces him to pathetic weeping."

This election will not be decided by the debates, however. It will be decided by the American people. Regardless of who comes out on top in these debates, they know we can't afford another four years like the last four years. And they will ultimately choose a better future by electing Mitt Romney to be our next president.

"The American people, who will be tuning in to watch by the millions, know that the debates are an ugly, meaningless sham. The debates will not sway their votes; they will watch only for the ugly, violent entertainment value, just as the debauched ancient Roman mob watched gladiators fight to the death."