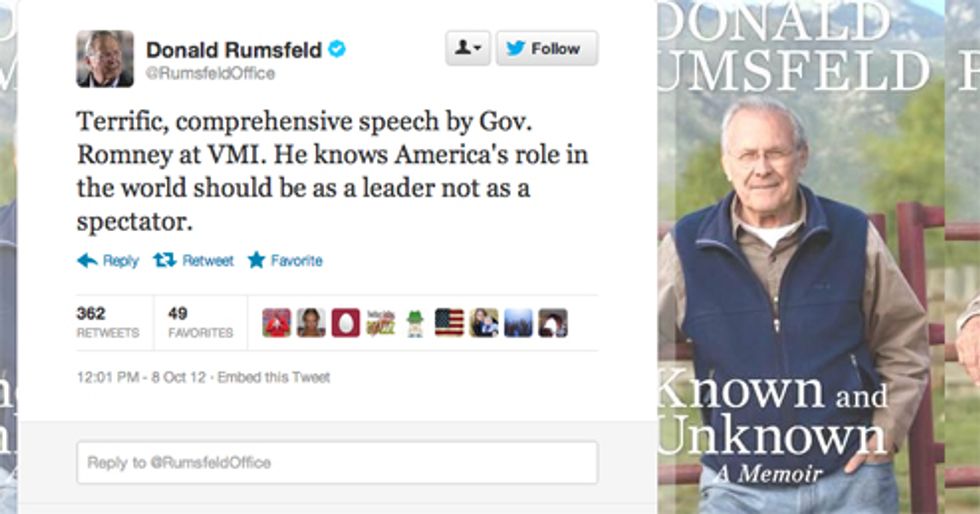 Oh, boy, a Republican presidential candidate just went to give a "major foreign policy address" to a military academy, which as we all know means a whole lot of highly explosive murder-death, for freedom, right? Well, sorry carnage lovers, your 2012 GOP nominee isn't the sort of guy who, say, makes up comical "Weird" Al-style song spoofs about dropping bombs on other countries and killing tens of thousands of people. Nope! You're stuck with Mitt Romney, who comes from a modern-day executive class that believes the answer to everything is "leadership," and that you can learn "leadership" by reading the executive summaries of all the terrible business books with "leadership" in the title, and that liberal weenies who've never run a business don't understand "leadership," and that what the world wants is more American "leadership," from a real "leader," Mitt Romney. "Fuck this noise," you're saying, "Who will America bomb, under President Romney? WHO?" Details after the jump, but ... maybe nobody? BOOO.

So go ahead and read all five pages of Mitt's remarks to VMI if you hate yourself, but trust us when tell you that here are all the specific things Romney promises to do to and/or with foreigners (vague hand-wavey bullshit about "leadership" and "clarity" and "helping promote freedom" and whatever excepted):

So there you have it: it's like he barely wants to bomb anybody at all! Just maybe sail some boats at people and sell guns to some other people. Still, at least one American hero was so deeply moved by the speech that he felt compelled to type into his Twitter machine, while standing up at his desk:

Donald Rumsfeld will now only endorse people or policies in ways that direct pageviews to places where he can advertise his cleverly titled book. [WP]