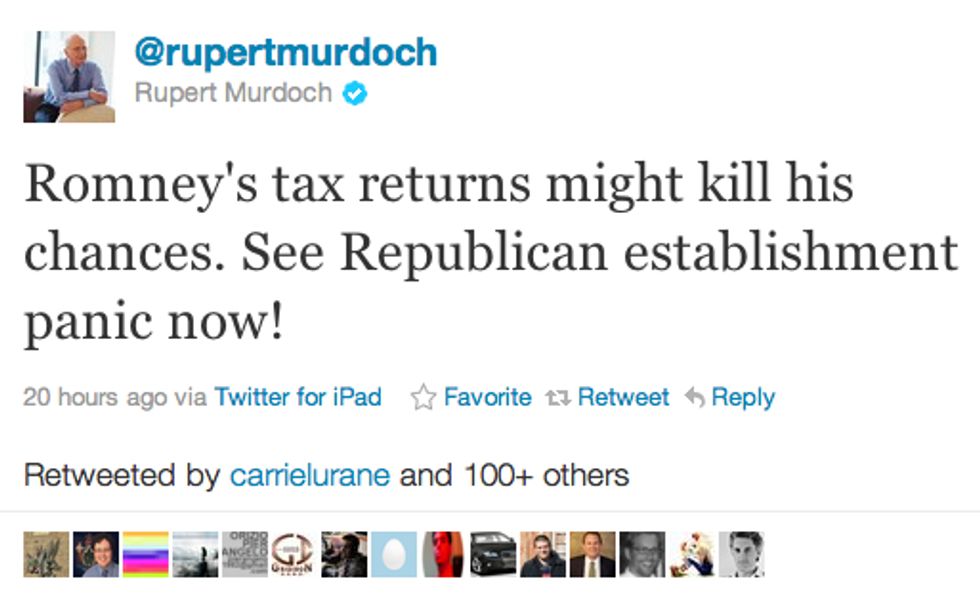 Where were you when you found out Mitt Romney made $42.5 million in two years? On the toilet, as you are now? Well the truth is that this Republican f----runner would like to downplay this significant Event in our country's history by telling you that, actually, he paid 'closer to 40 or 50 percent' in taxes in 2010 and 2011. Oh, that's great, sorry, it's just that tax returns are so hard to understand and we just thought the amount that you paid in taxes was the amount you paid in taxes, but apparently it's actually any money that you spent that did not go towards making you or your houses prettier.

Oh, this is a dizzying one. In the above interview with Univision's Jorge Ramos, Romney was asked whether it is fair that he pays a 13 percent tax rate.

Romney responded that "Well, actually, I released two years of taxes and I think the average is almost 15 percent." Almost 15 percent. Clearly that sounded ridiculous coming out of his mouth, so he decided to try to scrounge up another 30 to 35 percent somehow:

And then also, on top of that, I gave another more 15 percent to charity. When you add it together with all of the taxes and the charity, particularly in the last year, I think it reaches almost 40 percent that I gave back to the community. One of the reasons why we have a lower tax rate on capital gains is because capital gains are also being taxed at the corporate level. So as businesses earn profits, that’s taxed at 35 percent, then as they distribute those profits as dividends, that’s taxed at 15 percent more. So, all total, the tax rate is really closer to 45 or 50 percent.

Even if Bain does pay 35 percent, this is like saying that the average American employer reduces the salaries of its employees because it has to factor in the corporate taxes that it will have to pay every year. Even if they did, the employees still have to pay 25 to 35 percent on that income. In every scenario, Romney loses.

Bottom line, we all know that Romney made this "dividends-as-income" deal with his employer expressly so that his income would not only be spread out across as many years as possible, but would also be taxed at a nearly nonexistent rate. It's called a get-rich-quick scheme, and for some reason it's legal. Now what simply amounts to greed is coming back to bite Romney in the ass, and he is fully aware of his own evilness. It's why he's finding himself saying -- in the very same interview -- things like:

I want to help the 99 percent.

We don't want your help.

And you know it's bad when a person worth 32 times the amount you're worth is giving a eulogy for your presidential bid on Twitter: