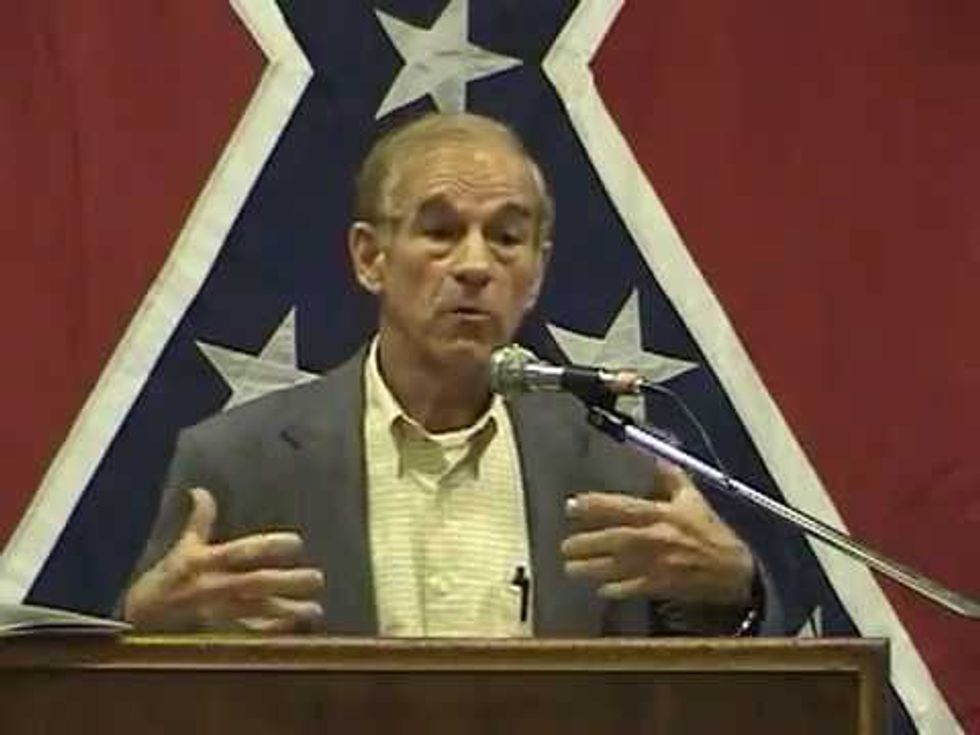 Ron Paul is scheduled to be the keynote speaker for a Sept. 11 conference sponsored by The Fatima Center, a rightwing "radical traditionalist" Catholic group that theSouthern Poverty Law Center calls "perhaps the single largest group of hard-core anti-Semites in North America." But that doesn't mean that Ron Paul is an anti-Semite, after all. He can't help it if his message of individual responsibility and kooky yearning for the Gold Standard happens to appeal to a Taliban Catholic group that promotes "New World Order" conspiracy claims and whose

publications have published columns criticizing the Pope for “kowtowing” to the “Synagogue of Satan,” argued that Jews are attempting to undermine the Catholic Church on behalf of Satan, and claiming that “Zionist billionaires” have been “financially raping” the Russian people.

Besides, you don't have to be an anti-Semite to believe that stuff, you just have to hate the Jews.

Dr. Paul will have some pretty elite company on the dais, like John F. McManus, the president of the John Birch Society, and Roberto Fiore, an Italian politician described as “absolutely the most extreme person who has ever served in the European Parliament.” The Fatima Center's leader, Father Nicholas Gruner, is also scheduled to speak before Paul; he's a happy man of God whose hobbies include attending Holocaust denial conferences.

The weeklong conference, titled “Fatima: The Path to Peace,” will be held in Niagara Falls, Ontario, apparently because the organizers were unable to find a suitable secret lair under a dormant volcano.

The SPLC says the group's press release describes the conference as

"a call to a return to sanity in the government of the world and the Church, for the two cannot be separated ...

"All speakers share one thing in common[:] a keen understanding that the nations of the world suffer profound disorder, that evil and shocking immorality are on the rise, that war and violence steadily increase, that the stability of our entire social order is at stake, and that a solution to the present chaos is of utmost necessity.”

It should be fun (for certain values of "fun") to see how Dr. Paul explains away his decision to speak before the Evil League of Evil; we're betting that the patron saint of handmade roadside signs will say he's just a fan of traditional values. Or, maybe, just as he had no idea that his people were sending out racist, homophobic newsletters under his signature, he was once again unaware of the less savory aspects of his hosts, like that time when he thought all the nice fellows in white sheets were just really into Casper the Friendly Ghost cosplay.