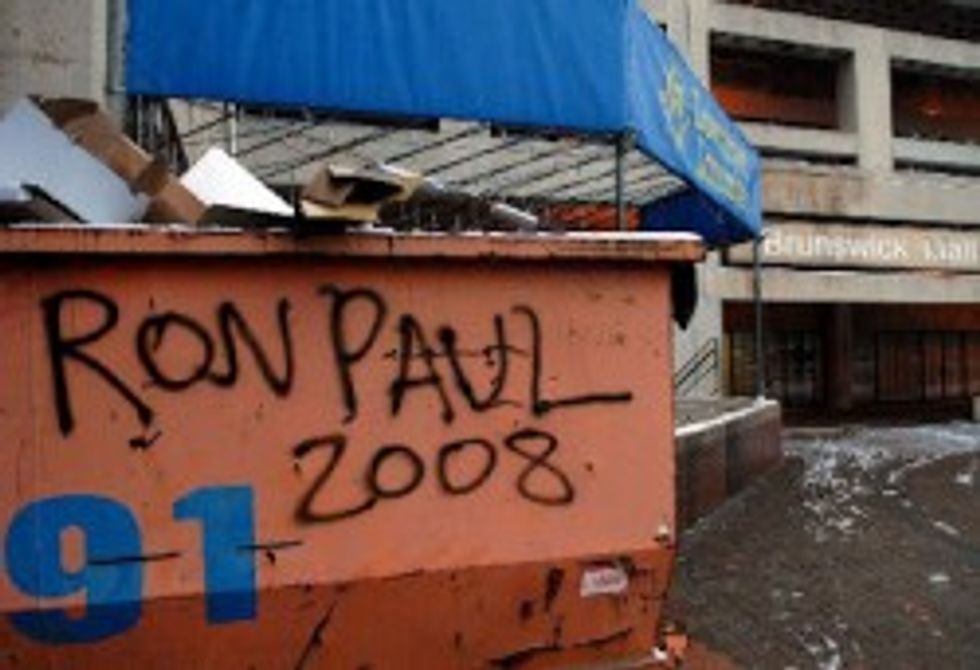 Remember when we told you about all of those “factions” that the GOP has created and is now desperately trying to control and iswhining about to the New York typists? Some of them, as it turns out, are easier to control than others. Like Ron Paul fans, who will not be placated because Ryan references the gold standard and because people shout “USA! USA!” at them whenever they try to nominate their candidate. What do they think this is, a political convention wherein members of their party nominate candidates of their choice according to a set of fixed rules and regulations? No, it is not anything like that; it is a teevee show of a coronation, and it's Mitt's Time.

Aside from Ann Romney’s assurance that what she has with her husband of forty-three years is a “real marriage,” the only compelling speeches and storylines of the night came from the candidates the Republican Party rejected. Former Pennsylvania Senator Rick Santorum and, even more consequentially, the absent Ron Paul.

We love you, The Nation, but we’ll remind you that there were in fact TWO compelling story lines in addition to Egg's speech: Ron Paul’s yelling minions, AND the lone nut who threw food at the CNN camerawoman because ‘this is how we treat animals.’

[Ron] Paul was the Romney challenger who stayed in the race longest, and who won almost 200 delegate votes...Not that many years ago, coming second in the convention vote might have guaranteed Paul a convention speaking slot.

At this convention, it guaranteed him—and his supporters—treatment so rough that his supporters, the largest dissident block on the floor, openly accused party chair Reince Priebus and his team of “corruption.”

For the record, we think it just makes sense, for Optics, to seat delegations from Guam and Puerto Rico in the front and delegations from Maine and Minnesota in the back, and also to shout USA! USA! at anyone who even mentions. There is no problem that shouting USA! USA!, right in someone's face, won’t solve.

As the New York Times noted: “Delegates from Nevada tried to nominate Mr. Paul from the floor, submitting petitions from their own state as well as Minnesota, Maine, Iowa, Oregon, Alaska and the Virgin Islands. That should have done the trick: Rules require signatures from just five states. But the party changed the rules on the spot. Henceforth, delegates must gather petitions from eight states.”

But Priebus did not just rewrite the rules of 2012. More ominously, he and the Romney team rewrote the rules of 2016. The party brass engineered a fundamental change in the next nominating process in order to assure that neither Paul—nor anyone else as interesting, or dissenting—will ever again be able to beat the establishment at its own game and win substantial numbers of delegates. The Paul delegates, many Tea Party conservatives and a number of renegade Romney delegates objected, creating the only real drama of the day, and the convention.

Paul Ryan has tried to secure Paul’s endorsement, claiming that the Romney-Ryan ticket will appeal to Paul’s supporters. After all, the platform references the Gold Standard.

Paul said Tuesday that his delegates felt they had been treated “atrociously.” And, no, Paul added, he will not be rushing to join the Romney team... “I have not endorsed the ticket,” Paul explained Tuesday. “I endorsed the principles I have been talking about.… I endorse peace, prosperity, individual liberty and the Constitution. I am more intent on that than on the politics.”

Ryan and Paul also both endorse a platform that would allow poor people to die of being poor, a personhood amendment, and a patriarchal society that uses religiously based law. USA! USA!