Ron Paul's Rally For The Republic Was Awful 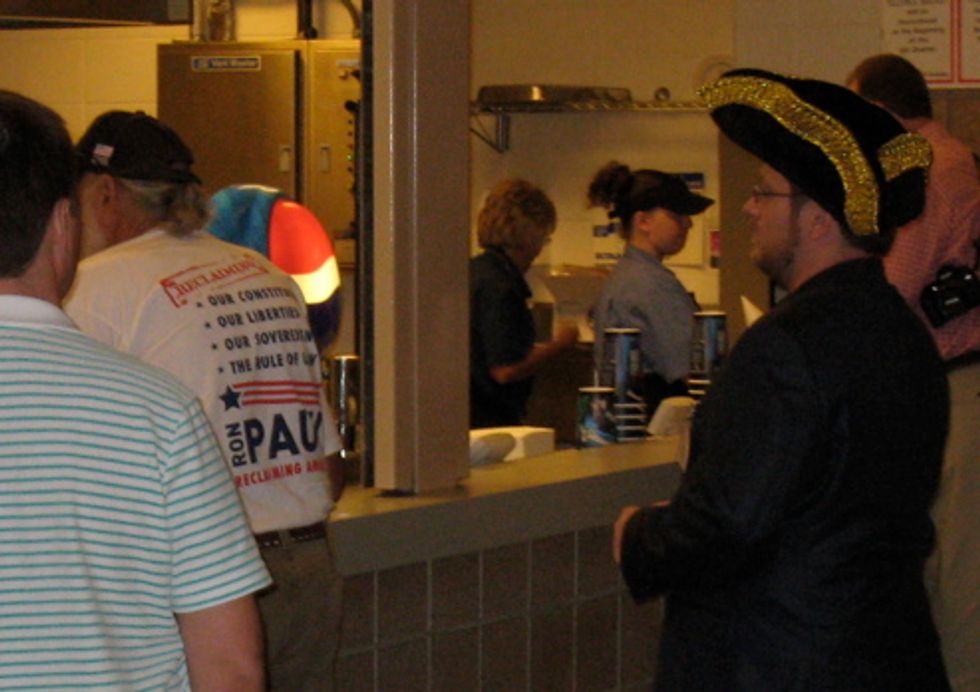 We really went to the damned Ron Paul rally. It was honestly depressing. This guy was just cold enforcing the Constitution on these food-service workers trapped in Target Center all day with these losers counting out their change for another chili dog. We have other sad pictures, if you want to cry or laugh or whatever people do.

We approached the basketball arena with trepidation. Would angry mobs of costumed losers be waiting outside to yell at passers-by? Nah. Just a few dozen people milling around, including four nice young dudes offering free tickets to anybody! Totally free!

This was much better than going to the media room and telling Ron Paul's loyal media helpers that Ken Layne of Wonkette would like press credentials, which would've somehow resulted in assault charges, against your editor. Plus, free bumper stickers and shit! (There is a two-inch-thick pile of Paultard stuff sitting next to the desk here at the Wonkette suites, and some of it might be funny, but so far nobody wants to go through it or even touch it, really. If nothing else, the pocket-sized copies of the Constitution will be handy if we ever get a chance to make a move on Elizabeth Kucinich.)

Aw, look at the cute kid in the anti-fiat-currency oversized T-shirt, hiding his malnourished body. Gold is money, sure, and these people don't have some.

Granted, it was still a couple of hours before Ron Paul spoke and, uh, before that troubled GOP Nashville singer gal was scheduled to do a 20-minute set at the end of the show. But there was no line, no crowd, just empty quiet and sorrow. When your editor left for good, some time after 3 o'clock, there was still nobody lined up.

The John Birchers got a colored kid for their display! Join the ReLOVEution or something!

Farewell, Dr. Congressman Ron Paul! Good-bye, handful of quiet Paultards. It was time to go back to St. Paul and await the real crazy people: Sarah Palin and those frothing-at-the-mouth delegates stomping and hollering when she cleverly made fun of the black fellow "helping the community" or whatever. Ha ha, poor people are losers!