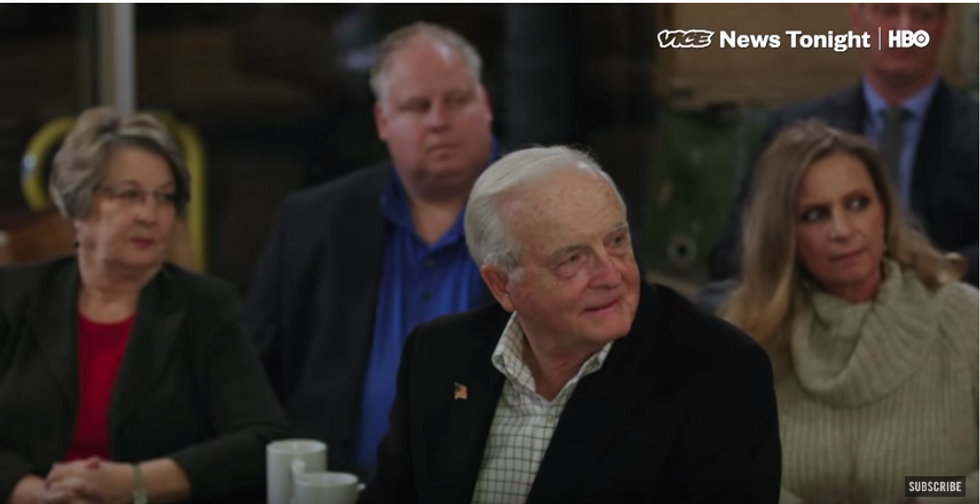 Last night, a segment on Vice News on HBO featured a Roy Moore supporter focus group, moderated by Republican pollster Frank Luntz, in hopes of giving us all some insight into the minds of these disturbed voters.

The primary gist is that most of these voters think that Roy Moore's accusers are lying and possibly being paid to do so -- but also that the things they are accusing him of are totally fine anyway and they see absolutely nothing wrong with them. You know, because people are often paid by mysterious entities to falsely accuse politicians of things that there is nothing wrong with them having done.

In fact, according to one fella on the panel this was perfectly acceptable behavior.

"If Roy Moore was guilty, if he was at the mall hitting on this 14-year-old... Forty years ago in Alabama, there's a lotta Mamas and Daddies that'd be thrilled that their 14-year-old was getting hit on by a district attorney."

To be fair, you can't really expect any sentence beginning with "Forty years ago in Alabama" to end well. Although it is also possible that he is confusing real life in 1977 with the lyrics to "Fancy."

Many of those on the panel expressed frustration that these women would suddenly accuse Roy Moore of being a perv just before an election. Unfortunately, Luntz did not point out that the reason they were speaking out now is because reporters from the Washington Post had heard rumors about Moore's behavior and specifically sought Leigh Corfman out. Or, perhaps, pointed out that it's a lot easier to come forward about something if other people are also coming forward. This is not a fun thing to be alone on!

The conversation then moved to the fact that pretty much no black people in Alabama were going to vote for Roy Moore, and why that might be (Psst! It is maybe because he says things about how great America was back when they were slaves?).

One man's answer, perhaps ironically, was that "Because they listen to people that have influence over them," and also because they are "stupid." One woman opined that race relations in Alabama had been absolutely fantastic from the 1980s up until Obama was elected, which does not exactly sound like a thing that was true for the black people living there.

Another woman wondered why it is that they wanted all the immigrants to steal their jobs, and why they wanted babies to be aborted at 9 months (which, shockingly, is not a thing).

Lord help us all.

THIS IS NOW YOUR OPEN THREAD!

Wonkette is woman-owned and 100% reader funded. Click here to tip us!