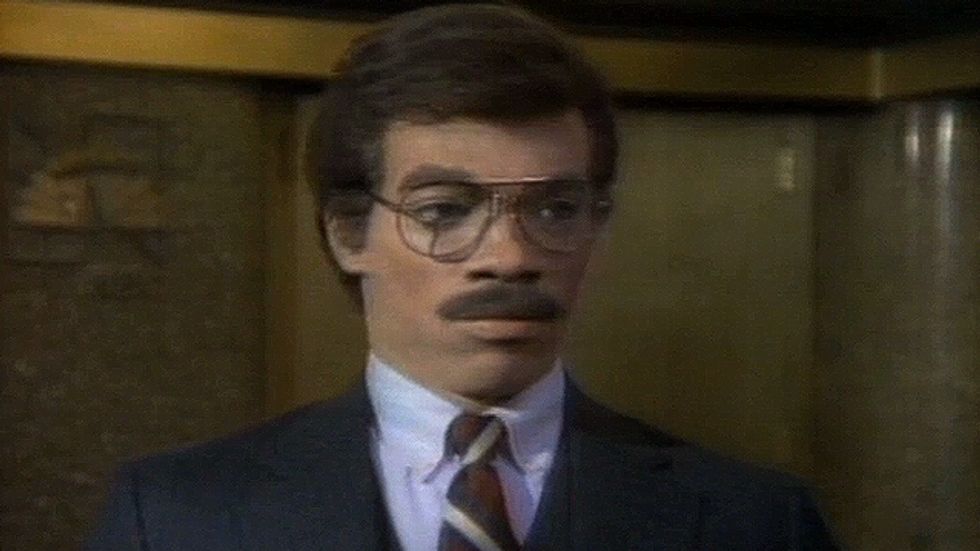 Giuliani spent much of Thursday on a whirlwind clown tour of media outlets that were Fox News so he could clarify this important point: that it is 2008 again and we need to talk a lot more about where Obama grew up and where he went to church, and also Saul Alinsky and Frank Marshall Davis were Obama's best buds. Somewhere in there, Giuliani found time to do an interview with the New York Times, which he may have thought was another Fox affiliate.

In that interview, Guiliani finally got the chance to clarify what he meant when he said that Obama "wasn’t brought up the way you were brought up and I was brought up, through love of this country.” For one thing, it was definitely not racist, oh no no no no no. He was merely talking about Obama's worldview, which is wholly alien to normal Americans:

“Some people thought it was racist -- I thought that was a joke, since he was brought up by a white mother, a white grandfather, went to white schools, and most of this he learned from white people,” Mr. Giuliani said in the interview. “This isn’t racism. This is socialism or possibly anti-colonialism.”

See? Giuliani's just one white guy criticizing a fellow white guy, the way white guys do. The Times notes that Giuliani "also challenged a reporter to find examples of Mr. Obama expressing love for his country." Wow, that's a nigh-UNPOSSIBLE challenge! Like maybe this?

I am the son of a black man from Kenya and a white woman from Kansas. I was raised with the help of a white grandfather who survived a Depression to serve in Patton’s Army during World War II and a white grandmother who worked on a bomber assembly line at Fort Leavenworth while he was overseas. I’ve gone to some of the best schools in America and lived in one of the world’s poorest nations. I am married to a black American who carries within her the blood of slaves and slaveowners -- an inheritance we pass on to our two precious daughters. I have brothers, sisters, nieces, nephews, uncles and cousins, of every race and every hue, scattered across three continents, and for as long as I live, I will never forget that in no other country on Earth is my story even possible.

Oh, shit, he mentioned slavery, so that's inherently a focus on bad stuff.

That is the true genius of America, a faith in the simple dreams of its people, the insistence on small miracles. That we can say what we think, write what we think, without hearing a sudden knock on the door. That we can have an idea and start our own business without paying a bribe or hiring somebody's son. That we can participate in the political process without fear of retribution, and that our votes will be counted -- or at least, most of the time

Oh dear, he ruined it at the end, there. Well, how about his 2009 inaugural address?

In reaffirming the greatness of our nation we understand that greatness is never a given. It must be earned. Our journey has never been one of short-cuts or settling for less. It has not been the path for the faint-hearted, for those that prefer leisure over work, or seek only the pleasures of riches and fame. Rather, it has been the risk-takers, the doers, the makers of things -- some celebrated, but more often men and women obscure in their labor -- who have carried us up the long rugged path towards prosperity and freedom.

Well, OK, that's nice, but he still never said that he LOVED America, the unpatriotic America non-lover, so it doesn't count.

Giuliani also went back to more familiar territory Thursday evening on Fox's The Kelly Files. Megyn Kelly pretended to ask a couple of tough questions -- asserting that it's possible even for liberals, who are completely wrong, to still love America even if they're totally misguided in what they want to do. Giuliani wasn't buying it, because Jeremiah Wright and Frank Marshall Davis, and who cares whether Obama's grandfather fought in WWII if he was a commie? Also, the Crusades. You can't love America if you think the Crusades were bad, because apparently many Americans who loved America very much died in the Crusades, for America:

Near the end of the interview, Giuliani finally offered a three-part test for Obama to finally prove that he loves America:

If the President goes and makes a speech, and talks about what a great country this is; if the President can complete the following sentence: "During the Crusades, the Christians were barbarians, and so were the Muslims;" if the President can say Islamic fundamentalist terrorism is our enemy, I will applaud the President. But until he does that, I will have doubts about his emotions, his feelings, his attitudes, and the way in which he developed. We haven't even mentioned some of the other communists, and leftists, who educated him as a young man.

And then he was back to Jeremiah Wright, so maybe repudiating Wright again would be step four in Loving America. We should probably get all that stuff on the Citizenship test, just to be sure.

Funny thing about Rudy Giuliani's Love For America, though -- as Wayne Barrett in the New York Daily News points out, Rudy does have a point about how Obama wasn't brought up "like you and me" -- or at least, not like Rudy Giuliani was:

Giuliani went so far as to rebuke the President for not being "brought up the way you were and the way I was brought up through love of this country," a bow no doubt to the parenting prowess of Harold Giuliani, who did time in Sing Sing for holding up a Harlem milkman and was the bat-wielding enforcer for the loan-sharking operation run out of a Brooklyn bar owned by Rudy's uncle.

Though Rudy cited Harold throughout his public life as his model (without revealing any of his history), he and five Rudy uncles found ways to avoid service in World War II. Harold, whose robbery conviction was in the name of an alias, made sure the draft board knew he was a felon. On the other hand, Obama's grandfather and uncle served. His uncle helped liberate Buchenwald, which apparently affected him so deeply he stayed in the family attic for six months when he returned home.

For his own part, Great America-lover Rudy Giuliani is a true patriot. Barrett says Giuliani's remarks were

an echo of a speech he'd delivered to delirious cheers in Arizona a week earlier when he declared: "I would go anywhere, any place, anytime, and I wouldn't give a damn what the President of the United States said, to defend my country. That's a patriot. That's a man who loves his people. That's a man who fights for his people. Unlike our President."

Or at least maybe he'd do that now, unlike during the Vietnam War, when he got "a half-dozen deferments" from the draft.

And let's close with a little reminder of how loving America can mean slightly different things to different people, as Al Franken wrote in Lies and the Lying Liars who Tell Them:

We love America just as much as they do. But in a different way. You see, they love America like a 4-year-old loves his mommy. Liberals love America like grown-ups. To a 4-year-old, everything Mommy does is wonderful and anyone who criticizes Mommy is bad. Grown-up love means actually understanding what you love, taking the good with the bad and helping your loved one grow. Love takes attention and work and is the best thing in the world.

That's why we liberals want America to do the right thing. We know America is the hope of the world, and we love it and want it to do well.

Really, Rudy, you need to calm down a little. The big mean partly-white man in the Oval Office isn't going to go after yo' Mama. Or your draft-dodging daddy and uncles, for that matter.