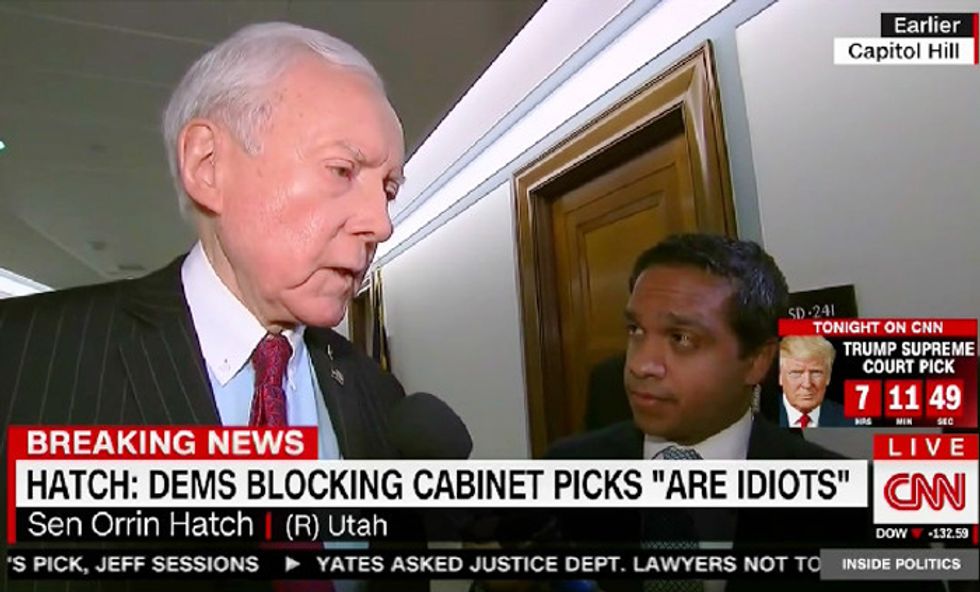 The rush to confirm the hideous, madness-inducing concatenation of eldritch abominations that constitutes Donald Trump's cabinet nominees took an ugly (or uglier) turn Wednesday, when Utah Senator Orrin Hatch responded to Democrats' procedural maneuvering with the Senatorial equivalent of flipping over the table when you don't like the way the game is going. Democrats on the Senate Finance Committee had boycotted the committee's hearing Tuesday, denying the committee a quorum, so it had to delay a vote on sending to the full Senate the nominations of Steven Mnuchin for Secretary of the Treasury and Tom Price for Secretary of Health and Human Services. So when Dems boycotted the rescheduled meeting again Wednesday morning, Hatch, the Republican chair of the committee, said the hell with it and changed the rules to allow a vote without any minority party members present, SO THERE.

You see, in RepublicanLand, it's only OK to delay a nomination if you're a Republican. Hell, if you're a Republican majority, you can delay everything forever, because where in the Constitution does it say a Democratic president has to have any nominees confirmed? Hatch read the committee rules, noting that at least a third of the committee members, including at least one member of each party, were needed for a quorum. But then he out-gamed the Dems who had denied a quorum by walking out, adding, "However, under Rule 19, the committee may opt to suspend any of its rules at any time.” And then he got bitchy:

Essentially, since no Democrats were present to object, Republicans on the Finance Committee changed the rules temporarily, and approved Mnuchin 14 to zero. It's a move that even Hatch said was “unprecedented.”

“Republicans on this committee showed up to do our jobs,” he said. “Yesterday, rather than accept anything less than their desired outcome, our Democrat colleagues chose to cower in the hallway and hold a press conference.”

Heavens, those mean old Democrats, refusing to do their jobs! Which is totally unlike how Republicans denied Barack Obama a vote on any number of appointments, the most important being his nomination of Merrick Garland to the Supreme Court. Oh, but those nasty Dems tried to slow down the rush to confirm Mnuchin and Price, what nasty Democrats! Let us suspend the rules, so we can get on with the People's Business. The Republicans approved both nominations, on 14-0 votes, to go on to the full Senate.

As Think Progress points out, the Democratic walkout wasn't simply for the sake of foot-dragging (fun though that may be, especially if you can get up a good static electricity charge and goose Jim Inhofe). Mnuchin and Price are both seriously ethically challenged, in ways that in Olden Times, like the early 2000s, would have resulted in their being asked to withdraw from consideration:

there is significant evidence that both nominees lied to the committee. For example, Mnuchin has even acknowledged that his answers were not “true, accurate, and complete,” as was apparent from his need to revise his initial disclosure questionnaire twice because of entities he “inadvertently missed.” He also testified that OneWest Bank never used “robo-signers,” even though it frequently did.

These plutocrats will help make America great for the common folks, after laying off and foreclosing on them.

And that's leaving aside OneWest's sleazy foreclosure practices under Mnuchin, which have been described as a "foreclosure machine." But that's just business, not lying to a confirmation hearing.

And then there's Price, who has his own insider stock trading issues and is also a member of a whackjob "medical " association. He may have fibbed a bit about his financial deals too:

Asked during the hearings about being invited to buy discounted stock in a biomedical company called Innate Immunotherapeutics, Price insisted he bought it at a price “available to every single individual who was an investor at the time.” This week, the company outed Price as lying, confirming that he did buy the shares at a privileged 12-percent discount. Its shares have tripled since then.

Obviously, the Dems on the Finance Committee are just a bunch of whiners, nitpicking over such tiny issues, so Orrin Hatch had no choice but to ignore their delaying tactics, change the rules, and vote the two nominations on to the full Senate, since the committee hearings had descended into nothing more than partisan delaying by the Democrats. So sad to see Hatch forced to take such extreme actions, really, but he had no choice, since the Democratic members of the committee were being so unreasonable in the face of a clear mandate from The People to steamroll the nominations through.

Happily, there's little chance the Senate would resort to any such tactics in the upcoming fight over the nomination of Neil Gorsuch to the Supreme Court. It's a dignified place, after all.