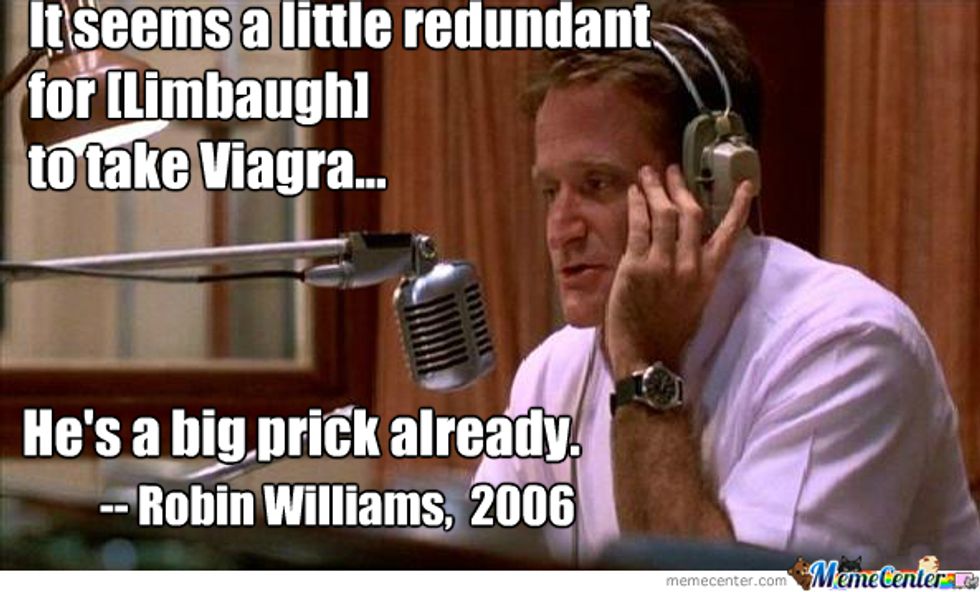 Dr. Rush Limbaugh, noted pharmaceuticals expert, had some thoughts on the death of Robin Williams today, and he figured out that it had less to do with depression than with Hollywood's politics. You see, Williams, like all other liberals, was just a really sad person who hated America, unlike happy jolly conservatives such as the joy-filled Ben Shapiro or the ever-mirthful Limbaugh himself.

“What is the left’s world view in general?” Limbaugh asked his audience the day after Williams’ death was announced. “If you had to attach, not a philosophy, but an attitude to a leftist world view. It’s one of pessimism, and darkness, sadness. They’re never happy, are they?”

You know, unlike the Right, which is always pretty content, and never given to harsh words. Except when leftists drive them to it.

Noting a Fox News story that suggested that Williams worried about his career and suffered from survivor's guilt following the deaths of friends like Christopher Reeve, Andy Kaufman and John Belushi, Limbaugh continued his expert analysis:

“Robin Williams felt guilty that he was still alive while his three friends had died young, and much earlier than he had.” the conservative talker explained. “He could never get over the guilt that they died and he didn’t.”

“Well, that is a constant measurement that is made by political leftists in judging the country.”

Again, it certainly is eye-opening to know that conservatives are immune to concerns about their careers, depression, and even being sad that their friends have died. We also hope that the suicide hotlines will begin screening for party preference, so that they can recommend a good dose of Austrian School economics to callers who may feel like ending it all. If only they would not be so weak, right, Oxycontin-boy?

Mr. Williams had already provided a brief discussion of Limbaugh's primary medical issues in a 2006 appearance on The Tonight Show that had wingnuts clutching their pearls for days. In a piece delicately titled "Robin Williams Refers to Rush Limbaugh as a Piece of Male Genitalia on ‘Tonight Show’," sensitive soul Noel Sheppard sighed quite heavily at Williams and his unspeakable rudeness:

Jay Leno nicely set up Williams by asking for his opinion about the recent Viagra story concerning Limbaugh. Williams answered: “First of all, it seems a little redundant for him to take Viagra. You know, the fact that he takes it he gets taller. (audience laughter)”

Williams continued: “I mean, why do you need Viagra? It’s a hard thing when he’s a big pr—ck already. (huge audience applause)”

That'll do, Robin. That'll do.