Rush Limbaugh: Stop Being Mean To Bill Cosby Just Because He Maybe Raped All Those Ladies 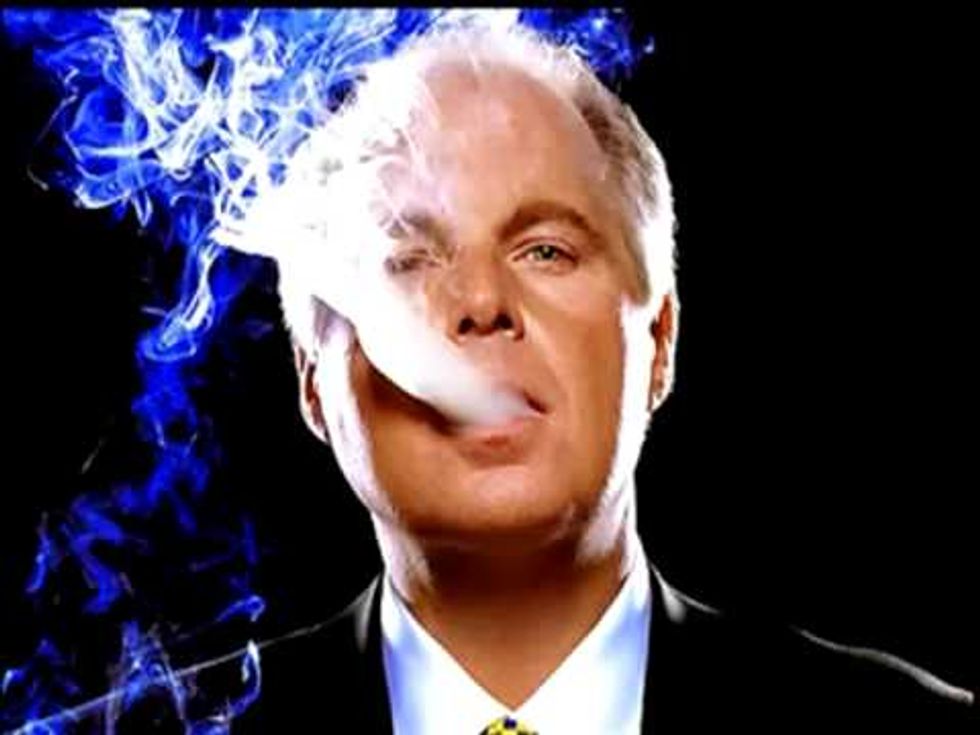 Rush Limbaugh -- the greatest defender of black men and also the guy who is single-handedly trying to change the rape culture to reprogram boys to not do that -- has some thoughts on Bill Cosby, who is black, and on rape, which is wrong.

Because we certainly would not want to get a Sternly Worded letter from Limbaugh's attorney threatening to sue us, accusing us of being absolutely disgusted by his bile out of context, we'll just provide this full but of course annotated transcript for you:

I don’t know how many of you, if any, have had CNN on today. They’re spending more time on a particular story than anything else and that is -- I mean, it looks like they’re trying to destroy Bill Cosby.

Apparently, a woman has come forward, or came forward some time ago, claiming he raped her. Numerous times. And she’s been on CNN today, repeating the story. And CNN has decided to adopt this story and make it the number one cause célèbre of the day. And they’ve got experts left and right testifying on what it all means, and why it happened, and what could it mean for Bill Cosby’s reputation.

Well, actually, we are going to have to question Limbaugh's guess there, since, as Happy Nice Time reported this week, Cosby's "PR team invited the Twitterverse to create memes around the legendary accused serial rapist." Which leads us to think that maybe Cosby, or at least his PR team, is at least vaguely aware that some people are saying some words on the interwebs about the rape allegations. And not just the one rape allegation, but the 14 rape allegations what we already told you about back in February. But maybe it is just pure coincidence that Cosby has been in hiding since these multiple allegations have resurfaced. But nah, clearly CNN -- the only outlet who has ever reported on this one out-of-the-blue allegations -- is out to destroy Bill Cosby. And of course Limbaugh has a pretty good explanation for why CNN what do such a thing.

All these people that don’t know diddly squat about it are up there now commenting and weighing in on it. And I asked myself, “What did Bill Cosby ever do to tick off some producer at CNN? Or some reporter or some assignment. What happened here? And then I had to stop and remember. Bill Cosby has, numerous times, in the recent past, given public lectures in which he has said to one degree or another that black families and communities had better step up and get hold of themselves and not fall prey to the forces of destruction that rip them apart. And basically he started demanding that people start accepting responsibility.

And the next thing you know, he’s the nation’s biggest rapist as far as CNN’s concerned.

Ah yes, that must be it! CNN is out to destroy Bill Cosby for saying the kinds of things Rush Limbaugh loves to hear about how The Blacks are destroying themselves and America. And CNN, being a radical leftwing news outlet, must silence Cosby for simply telling it like it is.

This is not news. It’s nowhere else. I mean, maybe there’s a headline somewhere else. Or is it bigger than I -- Has it been on Twitter for a while and suddenly CNN just go to it? The last few weeks it’s been growing. Okay, so I don’t do Twitter.

This is the moment when we would normally pause to reflect on Limbaugh's implication that these multiple rape allegations aren't news because hey, even if he did it, it was so long ago. So what's the big deal, right? But we'd hate to take Rush Limbaugh's words out of context and allow readers to incorrectly believe that once again, Limbaugh is excusing and defending an alleged rapist. So we won't do that this time.

If you want to be technical about it, it's Dr. Huxtable. But meh, details. Go on, Rush. Tell us more of your thoughts on CNN's war to destroy Bill Cosby.

Oh yeah, you seen some of the funny Tweeter, the Twitter mock-ups? "My two favorite things in the world are rape and Jell-o" is a tweet. I mean, it’s vicious stuff.

Didn't Rush Limbaugh tell us just a moment ago that he doesn't do the Twitter thing? So how is it possible that he's seen these "vicious" tweets that he could not even have seen because he does not do the Twitter and therefore could not have been aware of the multiple stories, prior to CNN jumping on the Destroy Cosby bandwagon? Meh, more details that don't matter obviously.

We won't tell you what to make of this burst of insight from Limbaugh because we'd hate to make the mistake of misinterpreting his words. And we wouldn't want to leap to any unfair conclusions about what he really means, because it would be unfair to assume that Limbaugh means what he says he means. And we most definitely would not want to point out that this is yet another of a million examples of Rush Limbaugh casually dismissing rape allegations because he doesn't believe rape is a real thing, nor does he have much or any at all sympathy for rape victims. And we absolutely will not make any jokes about his limp dick and how he should perhaps choke on it. Because, as his lawyer recently said, "You’ve got to be more responsible. You can’t maliciously attack people."

So we won't do that. We're sure a further explanation will be forthcoming from Limbaugh's attorneys, chiding us again for misunderstanding all the none-too-subtle arguments Limbaugh has made over the decades about rape. Once you hear the whole thing in the context his lawyers will provide, it probably makes perfect sense.