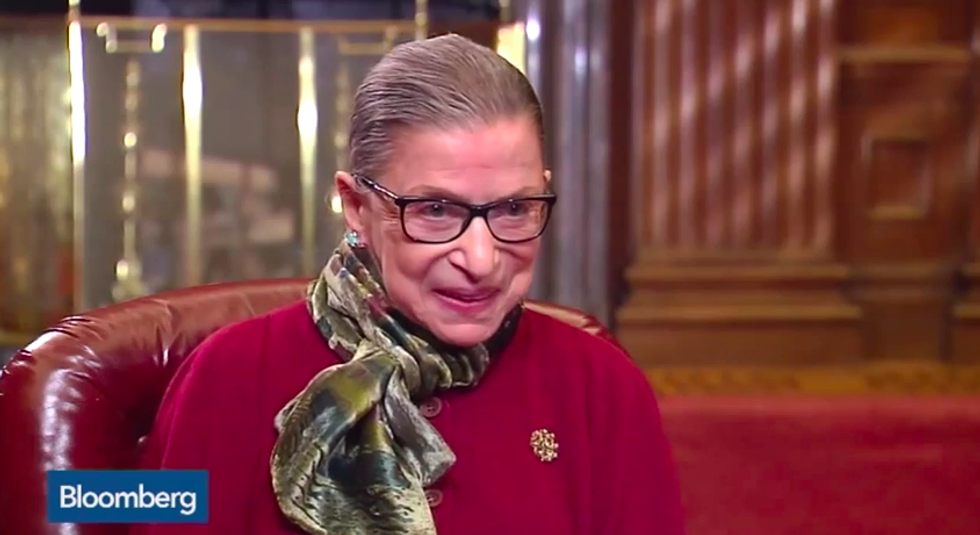 Judicial Superhero and Supreme Court Justice Ruth Bader Ginsburg has really been getting around lately, spreading all of her radical liberal propaganda about how men are awful and gay marriage is coming soon to an America near you.

In a recent interview with Bloomberg, she was asked whether she's "concerned" that the some Americans will have all the sads when the Supreme Court have finally and definitely tells us all later this year that two consenting adults have a constitutional right to marry each other no matter what kind of naked sexytime body parts they have.

You will be shocked to know that nope, she is not losing any sleep over that nonsense.

"I think it’s doubtful that it wouldn’t be accepted," she said, resisting the impulse (we assume) to say, "And you know what? Who gives two shits whether homophobic bigots don't like it?"

Being a Supreme Court justice, however, and not a filthy-mouthed irreverent blogger, Ginsburg politely and delicately continued explaining why Americans will be OK with marriage equality.

In recent years, people have said, “This is the way I am.” And others looked around, and we discovered, it’s our next-door neighbor. We’re very fond of them. Or it’s our child’s best friend. Or even our child.

I think that as more and more people came out and said, “This is who I am,” the rest of us recognized that they are one of us.

Gay people -- they're just like us! In fact, they are us! Even Republicans who hate The Gay on principle have discovered that some of their very own family members are The Gay, and they've had to reluctantly and apologetically disagree with their party on whether their very own children, if not all The Gay, should be treated like equal citizens.

Since the majority of Americans have seen enough HI-larious Gay Friend characters on their TV, or borrowed a cup of sugar from Adam and Steve down the street without it gaying them up or food poisoning them, or had that "Ah ha!" moment when their kid comes home from college to have The Talk with them, it's really no big whoop for most us now, Alabama judges notwithstanding.

"So I think it would not take a large adjustment," Ginsburg said and then, with a knowing and not-so-subtle twinkle in her eye, she added, "And of course we should not speak much more about this subject because one way or another, it will be decided before we leave town in June."

We can't say for sure, but we think that's code for, "Yup, the Supreme Court will be fixing that once and for all, so do whatever you need to do to 'adjust' now." And not a minute too soon.