Ryan Zinke Bringing More Oil Spills To Beaches Near You! 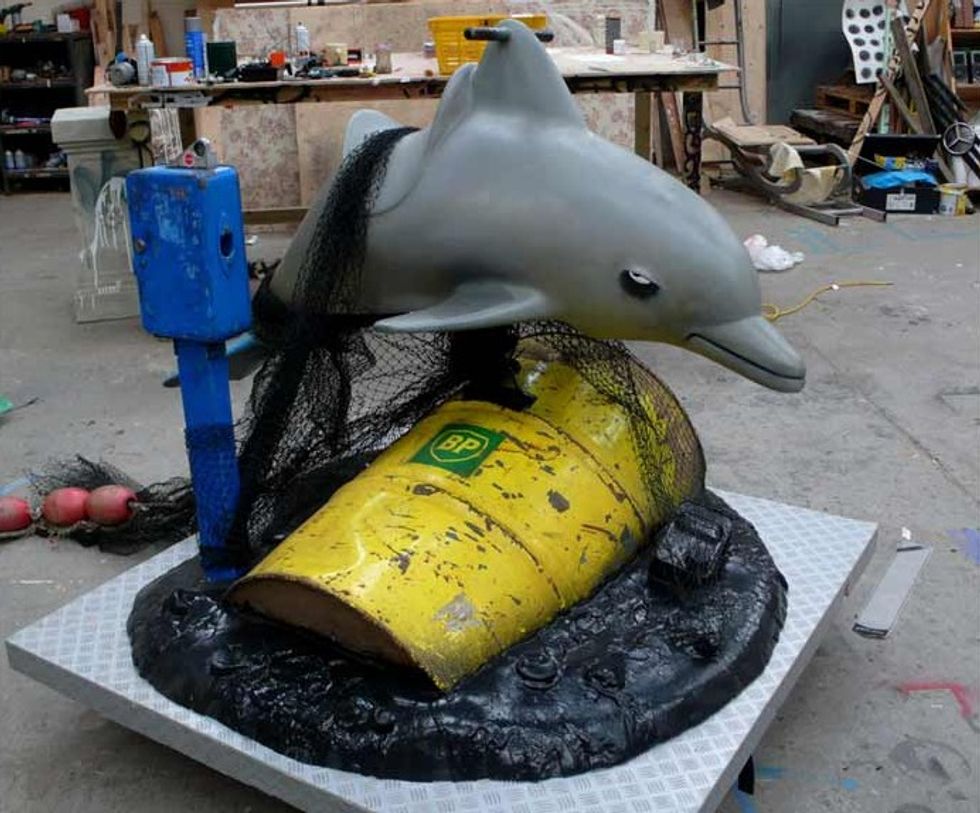 Coming soon to a beach near you!

Don't let all the hullaballoo over that new Nero Wolff book, Stewing In Their Own Juices, distract you from the real business of Donald Trump's America, which is making sure our suffering fossil fuel industries will somehow see another day of huge profits. Happily, Donald Trump and the Republican pillaging crew are doing what they can to insure a much oiler future for all of us!

Thursday, Interior Secretary Ryan Zinke unveiled an exciting new plan to open up just about all of America's coastlines to oil and gas exploration. Yes, even in protected parts of the Atlantic and Arctic, and even off the coasts of states where Republican governors have said they'd rather not have any oil rigs. (Democratic governors also oppose offshore drilling, but only Republican governors' oil reserves are considered American.)

Under the proposal, only one of 26 planning areas in the Arctic Ocean, Pacific Ocean, Gulf of Mexico and the Atlantic Ocean would be off limits to oil and gas exploration, according to Interior Secretary Ryan Zinke. He said the Bureau of Ocean and Energy Management has identified 47 potential areas where industry companies can buy leases between 2019 and 2024, when the proposed period would begin and end.

Presumably, the one area not approved for drilling is within view of a Trump coastal property. Or maybe it's being reserved for a new Hellmouth.

Zinke is very proud of the proposal -- which he reassuringly says is only a draft at this point, so "states, local communities and congressional delegations will all have a say" before federal officials ignore them and sell drilling rights. He called the proposal a brave departure from Barack Obama's wimpy concessions to the environment, which needs to be taught who's boss: "This is a clear difference between energy weakness and energy dominance,” Zinke said -- possibly while sipping an iced glass of light sweet crude in his real hometown of Santa Barbara, which hasn't had an oil spill since ... oh, 2015 actually! (Still, that was a teensy little spill, and had nothing on Santa Barbara's 1969 spill, when 3 million gallons coated its white beaches.) Zinke also promised the Trump regime would comply with environmental regulations, at least any that might remain after the EPA guts them.

The new offshore drilling plan is just one of several holiday gifts Republicans are giving to the Choke The Planet industry; two weeks ago, the Interior Department killed off a study aimed at increasing the safety of offshore drilling platforms, because America's need for more oil is so desperate that putting a few lousy oil workers and the occasional Entire Gulf Of Mexico at risk is just something we have to do. We have no choice.

Congress wasn't about to let the executive branch be the only ones to offer a loving New-Year's blowie to offshore extraction industries, either! In a tender gesture of giving, congressional Republicans allowed the expiration of a tax that funded oil-spill responses, as of January 1. The tax, which collected 9 cents per barrel on domestic crude oil and imported crude and other petroleum products, generated about $500 million last year for the "Oil Spill Liability Trust Fund." No more money for THAT wasteful anti-prosperity government program! Besides, there's probably plenty of money in there already:

The fund has roughly $5.7 billion in reserve. Intended to help the government respond quickly to accidents on land or offshore, it was established in 1986 but only got a stable source of funding in the wake of the 1989 Exxon Valdez spill.

Well heck, that ought to be plenty. Sure, the cost of cleaning up after Deepwater Horizon came to something like $62 billion, but most of that was eventually paid out by BP, and the statutory limit on expenditures from the oil spill liability fund is a billion dollars per disaster anyway. Besides, why should we burden other oil companies with costs for an emergency "cleanup fund" that will probably never be needed, since the invisible hand of the marketplace should prevent oil companies from ever wasting money on oil spills in the first place?

The Washington Post points out that the tax has lapsed in previous years but was always renewed by Congress. This time around, Republicans were really busy passing other big tax cuts and not funding children's health insurance, so it sort of slipped their minds. Really, it's no big -- just ask Randall Luthi, head of the offshore drilling industry lobbying group, which is called "the National Ocean Industries Association" as if maybe it involved your local fishing boat crews. He emailed WaPo to let them know there's no critical need for the tax, and the cleanup fund "has never run out of money, nor will it in the near future[.]” Yep, if that's not tempting fate, we don't know what is. Get ready for a huge oil spill in the next month or so, because that pull-quote and the unholy trinity of Republican gifts to offshore drilling are simply begging to come back and bite everyone concerned with painful irony. Be sure you quote Wonkette: We saw it coming.

Yr Wonkette is supported by reader donations. Please click here to send us money for our own "Christ, we hope we're wrong" fund.