S.D. Representative Does Not Care For You Lesbians Putting Weiners In Your 'Garbage Alley' 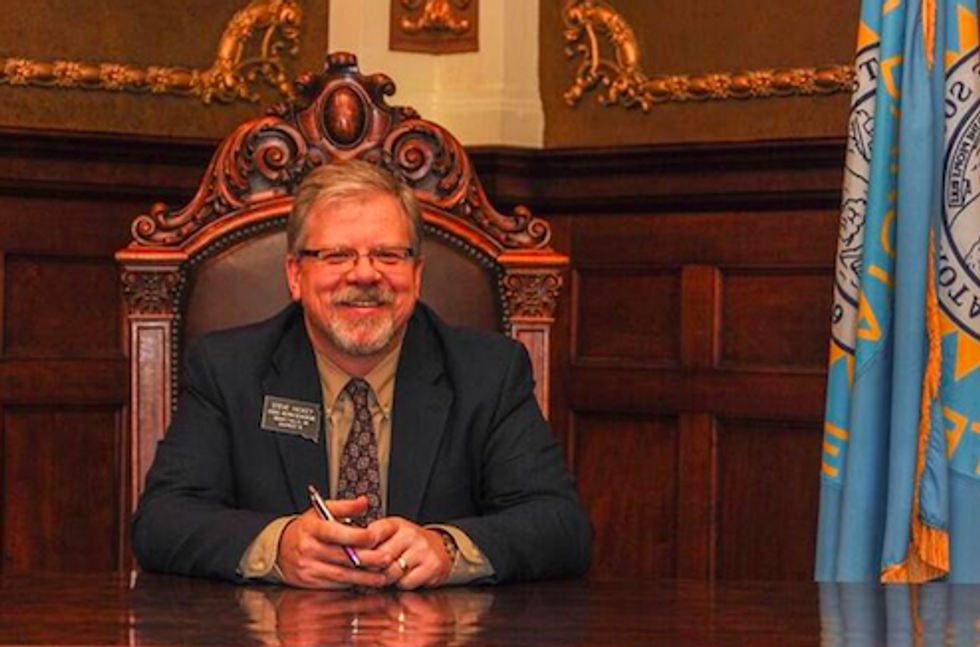 Buttsechs. Some people like to do it in their butts, while other people like to pay their rent owning mommyblogs that for some weird reason unknown to G_d or man (COUGH ANA MARIE COUGH) have become synonymous with anal loving. Still other people like to be elected representatives of the people of South Dakota and post long long SO LONG letters about how butts are "garbage alleys" and lesbians should not have weiners in their butts onto their Faceplace pages when the Argus Leader determines their letters to the editor to be a little much for your morning Grape Nuts.

In his masterpiece, "A One Way Alley for the Garbage Truck," state Rep. Steve Hickey proclaims a great many common-sense things. We shall explore them, together.

First on Rep. Hickey's hit parade is "Doctors: Why Do They Lie?"

South Dakota docs, it’s time for you to come out of the closet and give your professional opinion on this matter [THE MATTER OF MEN DOING IT IN THE BUTT] like you capably and responsibly do on all the others. Somehow the message we are presently getting from the medical community is that eating at McDonalds will kill us but the gay lifestyle has no side effects.

Well, that's just crazy, doctors! Assfucking has such side effects as possible tearing of the rectal lining and some STDs you could get. And polyps? Could there be polyps maybe? We don't know, ask Dan Savage. In the meantime, eating McDonald's is associated with strength and good times and being able to bone all night as the Silly Putty in the fryer congeals right in your dong and make it real tuff-like (and stretchy). Docs need to get with the program!

Second: What Is Marriage?

It’s not hate for a physician to speak up about something that is harmful to human health. It is not unloving to tell people you don’t have to have sex with and marry someone to love and be loved by them. As one who performs marriages and counsels couples as part of my professional life, marriage is the last thing I’d recommend to someone who simply wants to be loved and legitimized.

Indeed. Marriage is not a loving commitment to another person, binding your body and worldly possessions with theirs, hopefully ending with one of you dying; marriage is for ensuring your old man can't be forced to testify against you.

Part the Third: If Boys Dressed Like Girls Play Girls' Soccer, They Will All Still Commit Suicide Anyway

The South Dakota High School Activities Association is presently considering changing the rules to accommodate transgender kids. Forty-one percent of those who struggle with Gender Dysphoria attempt suicide, that's twenty-five times the rate of the general population– certainly tragic and urgent but not a word from the medical and psychological communities? So really, we are letting our basketball coaches sort it out while ACLU lawyers look carefully over their shoulders!?

Letting boys play girl sports is not the starting place to fix the suicide problem or the very real daily struggle these students face dealing with something they have been handed in life. Society is broken and people have broken identities. Is it really best for us to break down the one remaining thing that has been working in society to try to fix the broken in our midst? And does it really even do that, or does it merely put them in more places exposing them to additional painful ostracization all the while transferring serious anxieties to other innocent and impressionable ones in those locker rooms? We need to have compassion but there are unintended consequences to consider too.

Oooh, is that a lot of compassion to unpack! The children are dying, let us hug them to our bosoms and remind them that they will be ostracized painfully and also they may not be in locker rooms or their "anxieties" and brokenness will get smeared all over innocent ones, who, unlike them, are innocent.

We can see people who would say, I wish this young lady nothing but the best in being a young lady, but maybe it is not fair for her to play girls sports, at least competitively, because "testosterone," or, fuck, "femur length," I don't know, is "femur length" a thing? without it being a hate crime.

But until the day Sidwell Friends starts recruiting entire teams of transgirls and then pumping them full of steroids to play their girls lacrosse, the risk of unfair advantage seems vanishingly small. Concern trolling a girl that she is going to be ostracized painfully while telling her she is too "broken" to be in a locker room, and gee you hope she doesn't kill herself, that is sort of a different thing entirely.

Anyway, this whole thing started because a couple of lesbians want to get married. We think Steve Hickey might be confused about a thing or two.